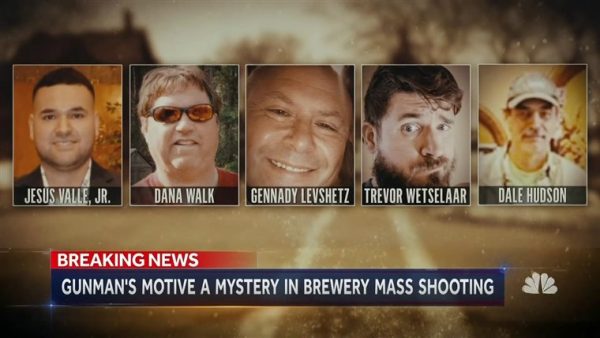 A mass shooting in Milwaukee, completely dropped from any coverage by the corporate media after the inconvenient truth of the shooters racial identity became known: a black male. Did he target white males during his mass shooting rampage?

Four of the five dead are white males, with the other victim being Hispanic:

But here’s what we know about the possible racial motivations behind the mass shooting no media outside of Milwaukee seems interested in discussing anymore. [Milwaukee Molson Coors shooter reportedly had long-running dispute with co-worker, NY Post, February 27, 2020]:

The man accused of opening fire at a Molson Coors plant in Milwaukee on Wednesday — killing five co-workers and himself — was a gun-loving electrician who had been in a long-running dispute with a co-worker, according to a report.

Anthony Ferrill, 51, had frequently argued with one of the fatally-shot victims, a fellow electrician, an employee told the Milwaukee Journal Sentinel.

The two co-workers had accused each other of going into each others’ offices and tampering with computer equipment or swiping tools, the source, who didn’t want to be named, told the outlet Thursday.

Ferrill also often watched movies on his phone during the day, something the other electrician had taken issue with, and believed he was being discriminated against because he was African American, the source added.

Ferrill had been fired earlier in the day but returned to the campus with a stolen name tag and a silenced gun, according to WBBM-TV.

He had worked as an electrician for more than 20 years — with about 17 of them being at the Milwaukee brewery, according to the Sentinel, which cited multiple sources and online employment records.

The Milwaukee Journal-Sentinel reported, “A co-worker who asked not to be identified for fear of being disciplined said Ferrill believed he was being discriminated against because he was African American, and that he frequently argued with at least one of the victims. The co-worker said Ferrill often watched movies on his phone during the day, which the other man took issue with, and that the two accused each other of going into each others’ offices and stealing tools or tampering with computer equipment.”

Anthony Ferrill’s motivations will be concealed and covered-up, just as the black shooter’s (Bryce Williams/Vester Lee Flanagan) manifesto was hidden from public consumption after his on-air murder of white journalist Alison Parker and white cameraman Adam Ward in 2015. Williams goal was a race war.

The corporate media will completely drop the coverage of this story, because a black mass shooter and dead white males at his hands won’t generate the kind of anti-2nd Amendment sympathy necessary to cause more states to enact gun control.