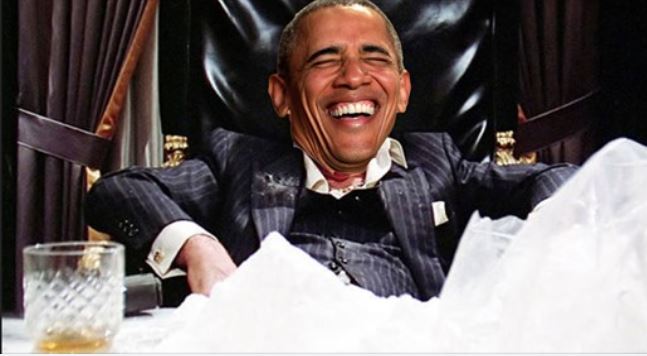 By HJIC at Illicit Info FLASHBACK

Speculation, Analysis, Opinion From K B| Isn’t it ironic that the same United States President who stated that “at a certain point you’ve made enough money” is bringing in tens of millions of dollars… on the taxpayer’s dime.

Following in the footsteps of the Clintons, the Obamas have struck gold in monetizing the presidency. From 2005-2016 the Obamas earned a total of $20.5 million, most of which ($15.6 million) were from books Barack authored before taking office, and the rest from his presidential salary and investment income.

Quickly after leaving office Obama joined the speaking circuit, which had earned the Clintons before him $153 million. The year Obama left office he became one of the ten highest paid public speakers in America, bringing in a cool $1.2 million from three Wall Street Speeches. Michelle began commanding fees of $225k per speech.

Then came the $65 million deal with Penguin Random House for two standalone books from the duo. Since that $65 million represents a cash advance, it’s the least the two will make from their books.

Adding even more to their cash pile, the two scored a deal with Netflix estimated to be worth $50 million last year.

The Obamas have been living large, purchasing an 8,200 square foot mansion in Washington D.C. in 2017 for a cool $8.1 million… the “second most expensive home in the neighborhood after Amazon.com CEO Jeff Bezos. This year the two are shelling out $14.8 million for a 7000 square foot, 29 acre beach side property in Martha’s Vineyard,” according to Bongino.com.

The Clintons took more than 20 years to bring in $153 million from Bill’s presidency.

In two years, the Obama’s took in $115 million, making them the most to profit off a United States presidency ever in our nation’s history. On top of that, the United States taxpayers are dishing out more money for the Obama’s than they ever have.

Obama’s $236k pension is also the largest of any president, which beats Clinton’s $231k.

This year the Obamas will cost the taxpayer $1,176,000, with the following breakdown of costs (note that all figures are in thousands). Secret Service costs are not included in any calculations, because that information is classified (but obviously add to the overall cost).