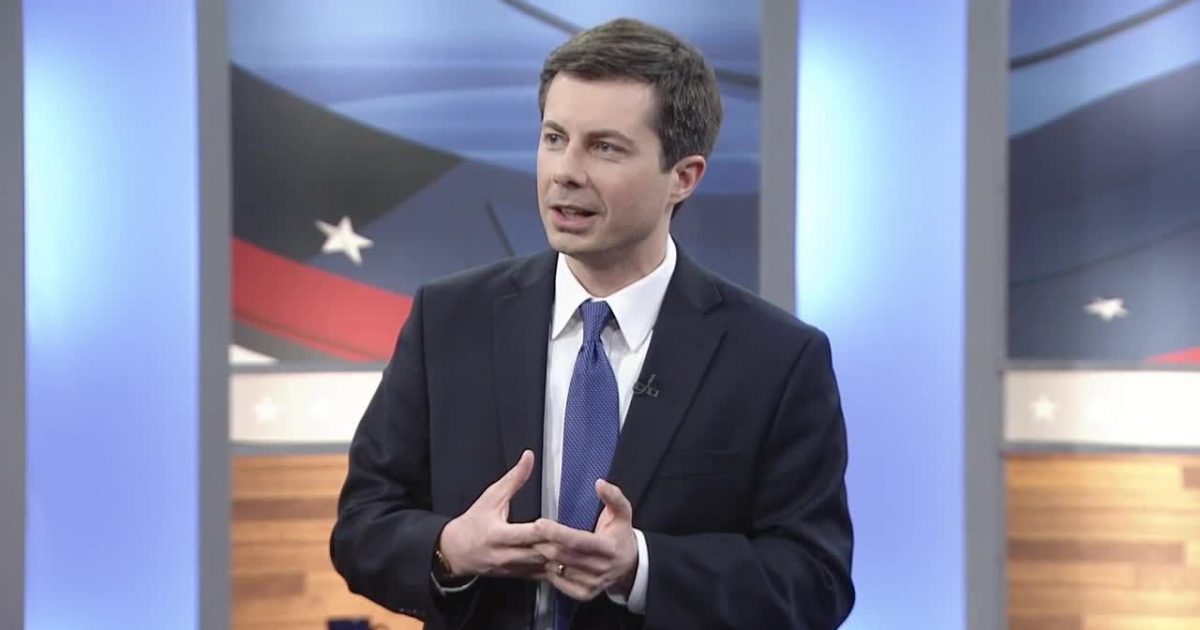 Pete Buttigieg is openly homosexual and even plans to start a family with his husband soon, possibly in The White House.

But in typical liberal fashion, those that you would think to be his primary supporters are simply not satisfied with his level of gayness.

The latest way that Pete Buttigieg allegedly brought shame upon the queer community was by discussing shame itself. At a CNN town hall in South Carolina, the presidential candidate marveled at meeting children who are openly gay. In contrast to them, Buttigieg said, “I was wrestling with this”—his sexuality—“well into my 20s. If there was a pill, a pill that I could take and not be gay anymore, then I would’ve jumped on it.” He paused for a beat, then went on, saying, “And thank God I didn’t. Because then I would not have the amazing marriage that I have now to Chasten.” The camera cut to Buttigieg’s husband in the audience, giving a slight, pitying smile.

The clip of that meant-to-be-humanizing moment quickly became the object of mockery in queer circles online. Some users LOLed at Chasten’s reaction, interpreting him as showing embarrassment rather than empathy. Others acted as though Buttigieg were articulating a self-hating desire to become straight now, at 38, rather than describing how he felt in his closeted earlier years. Twitter critics called his words “the most evil shit” and “vile,” and said his comments were “absolutely going to do damage” to thousands of “vulnerable LGBTQ youth.”

Such reactions plainly misrepresented Buttigieg’s meaning or, bizarrely, implied that gay people should never talk about the pain of the closet. Really, though, they shoved the pill-the-gay-away comment into a preexisting narrative: the one that says Buttigieg is basically straight. There’s a hashtag going around, #PetesNotGay, that involves dissections of the mayor’s closed-mouthed kisses with his husband on the campaign trail. Onion articles have imagined Buttigieg revealing a wife and kids, or condemning his own sexuality. The New Republic last year published and then retracted a scathing essay by Dale Peck that blasted Buttigieg as so buttoned-down and assimilated that he undermines a movement based in what is still often termed deviance. In a New Yorker piece titled “The Queer Backlash to Pete Buttigieg Explained,” Masha Gessen ends by calling Buttigieg “a straight politician in a gay man’s body.”

These arguments that present Buttigieg as not really gay so obviously flirt with the essentialism queer people fight against that it’s a bit shocking to see them get traction at all. Boring gays are still gay. Gays who love the Dave Matthews Band are still gay. Progressive gays who survey the current political landscape and bet that the way to successfully enact economic and social justice is by triangulating between Bernie Sanders and Joe Biden are—and this is the sticking point—still gay. That mantra of gay is good works as an anti-stigmatizing tool; it’s what, in fact, Buttigieg was invoking by saying he was glad he wasn’t able to medicalize himself straight. Conflating gayness with any particular moral, political, or aesthetic value the observer has deemed good, though, is an act of hijacking—one weirdly similar to the rhetorical move homophobes use when they say gay people are immoral.

To be sure, there are plenty of legitimate critiques coming from queer folks. LGBTQ voters tend to be younger and more liberal than other Democrats, so, in large numbers, they support candidates to the left of Buttigieg. His every gaffe and centrist slogan can be spun as a betrayal of the sort of radical queerness that is, in this moment, more visible than ever. Meanwhile, the chatter painting Buttigieg as virtually straight points to something that’s harder to talk about: the ways in which a Democratic front-runner is, in fact, unmissably gay, and how the backlash to him is itself tinged with its own strain of queer shame.This past week wasn’t the first time Buttigieg mentioned having wanted a pill to become straight. He also did so at an LGBTQ Victory Fund event in April, in a speech that is, if you are not on the Buttigieg bus, viscerally painful to watch in the way that so much of his oratory is. There’s a lot to cringe at: his glaring Barack Obama imitations, his slackened pace of speech that suggests computational work being done before each word, his consultant jargon (“laser focused”), his Mr. Smith Goes to Washington pretenses (regarding Mike Pence’s homophobia: “Your quarrel, sir, is with my Creator”), and his squirmy euphemisms (catch the Grindr joke?).
But amid the corniness, he edged toward something rawer. First, he told the happy tale of marrying Chasten. Then, he doubled back to earlier in his life, to “another part of the story that even now I have a harder time talking about … even though it’s something that maybe won’t be so surprising.” He went on:When I was younger, I would have done anything to not be gay. When I began to halfway realize what it meant that I felt the way I did about people I saw in the hallway at school or the dining hall at college, it launched in me something I can only describe as a kind of war. And if that war had been settled on the terms I would have wished for when I was 15 or 20 or frankly even 25, I would not be standing here. If you had offered me a pill to make me straight, I would have swallowed it before you had time to give me a sip of water. It’s a hard thing to think about now. It’s hard to face the truth that there were times in my life when, if you had shown me exactly what it was inside me that made me gay, I would have cut it out with a knife.And the reason it’s so awful to think about isn’t just the knowledge that so many young people struggling to come to terms with their sexuality or gender identity do just that—they harm themselves, figuratively or literally. The real reason it’s so hard to do that is that if I had had the chance to do that, I would have never found my way to Chasten.There’s a vividness, a darkness, and—in its attention to subtext—a queerness to this passage that might seem surprising coming from Buttigieg. He’s talking about his own experience of self-loathing using imagery that aligns with actual means of committing suicide and self-harm. He is drawing a line between his own experience and that of queer youths who do hurt themselves. He’s leaving open the question of how literal or figurative his own desire to cut or medicate himself was.It’s, as far as I’ve seen, the most introspective and specific Buttigieg has ever gotten when discussing his struggles with sexuality. Turn to his memoir, Shortest Way Home, to read Buttigieg’s lengthy dissections of such topics as traffic improvements in South Bend and the features of an Indiana sunrise. Gayness, by contrast, is depicted mostly in glancing terms, and mostly as a career problem he had to solve. Pages are given over to him thinking through how to come out, and to the reaction in local politics, and to the logistics of finding a date while in public office. The wish-for-a-pill phase, the long torment of the closet, goes undiscussed. He mentions being ribbed in gym class, but if the mockery involved homophobic slurs, we don’t hear about it. He describes busy days spent in public service; he doesn’t describe restless nights spent worrying about identity.A queer reader of Buttigieg’s memoir and life story is left to project. Buttigieg’s rise comes off as a breathless accumulation of achievements, including a Rhodes Scholarship, a job at McKinsey, a post in the Navy Reserve, election to public office, proficiency in multiple languages, and a quick stint as a concert pianist, all before turning 30. If he ever pithily sums up the psychological motive underlying all the hustle, I haven’t quite caught it. But I have thought a lot about the stereotypes of gay men as hyper-successful, image-conscious, and wounded. I have revisited Alan Downs’s widely read 2005 book, The Velvet Rage, which diagnosed gay men’s defining motive as shame. Here, the psychologist Downs describes queer children’s impulse toward parent-pleasing:

What would you like me to be? A great student? A priest in a church? Mother’s little man? The first-chair violinist? We became dependent on adopting the skin our environment imposed upon us to earn the love and affection we craved. How could we love ourselves when everything around us told us that we were unlovable? Instead, we chased the affection, approval, and attention doled out by others.

The “we” there is presumptuous, but the attitudes described are indeed common to many gay lives. Earlier this year, a Twitter thread on this topic from the writer Alexander E. Leon went viral. “Queer people don’t grow up as ourselves,” Leon began. “We grow up playing a version of ourselves that sacrifices authenticity to minimise humiliation & prejudice. The massive task of our adult lives is to unpick which parts of ourselves are truly us & which parts we’ve created to protect us.”

Unlike Obama, at least Pete Buttigieg admits to his sexual perversions.

Mayor Pete is not gay enough to carry the torch for the LGBTQ movement.

We could give them President Ru Paul and they wouldn’t be satisfied.

They’d claim he/she was too stereotypical.

Buttigieg is dangerous and it is not his sexual preference that makes him so.

Imagine the lucky kid who gets special mentoring from Pete Buttigieg.

The guy is trying to create a nationally sanctioned child molesting program!

Until he shows up at a speaking appearance with nipple clamps, a rainbow flag for a cape, high heel boots and a thong — it’s apparently not enough.