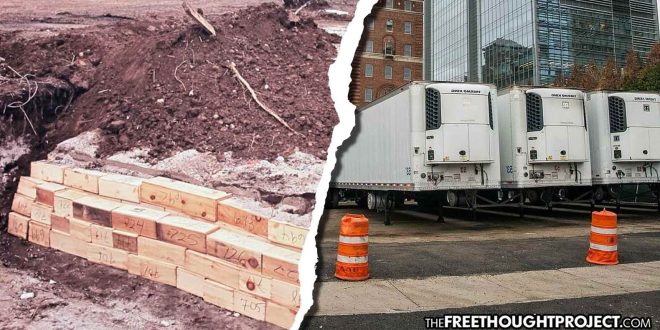 America is currently in utter turmoil. Panic buying has emptied shelves across the country, millions of unemployed people are spending their last dollar on food, hundreds of cities have been placed on lockdown, and cops are using Chinese-made patrol drones to monitor citizens 24-hours a day. In a matter of just 2 weeks, America has shifted from the land of the free to the land of the economic collapse and newly ushered in police state. The level of fear among the populace is at an all time high and the authoritarians are exploiting it. They are using America’s fear to give massive sums of money to special interests while fleecing the value of the dollar and ensuring lifetimes of debt for future generations.

As if this situation couldn’t get any more grim, a report from the Intercept this week — confirmed by Avery Cohen, a spokesperson for the office of Mayor Bill de Blasio — points out that Rikers Island prisoners are being offered incentive to dig mass graves. The city of New York is offering prisoners personal protective equipment (PPE) and $6 per hour, which is an extremely high number for prison labor, to dig mass graves on Hart Island.

According to the 2008 plan, developed by the city’s late chief medical examiner, Charles Hirsch, when regular city morgues are “at or near capacity and NYC does not have access to additional cold storage units, the OCME will direct temporary interment at the Hart Island Cemetery, managed by the Department of Correction (DOC), as its second tier approach.”

Business Insider reported on the contingency plan earlier this month but questioned whether or not it would be necessary. But according to a report this week out of the NY Post, city morgues and cemeteries are already overwhelmed, and FEMA is sending 85 refrigerated trucks for bodies of those dying from COVID-19.

“We are sending refrigeration trucks to New York to help with some of the problem on a temporary basis,” FEMA regional director Thomas Von Essen said at a Manhattan press briefing with Mayor Bill de Blasio on Monday.

Now, inmates are being asked to clear a much larger area on Hart Island that can receive massive casualties. As the Intercept points out:

Hart Island, though, “has limited burial space,” the report noted, and “may not be able to accommodate a large influx of decedents requiring burial,” which the preparedness plan estimated at between 50,000 and 200,000 in a pandemic with a mortality rate of 2 percent in which 25 to 35 percent of the population is infected.

The city document proposed employing the Department of Defense’s “temporary mass internment method,” which places caskets 10 in a row, head to foot, so as not to stack them on top of each other. Hart Island is located off City Island in the Bronx. In 2008, Rikers prisoners were burying roughly 20 to 25 bodies per week there, the report found.

Prisoners in Rikers will likely be jumping at the $6 per hour pay and the idea of getting out of the jail which is currently seeing its own outbreak. Currently, at the New York City jail, 167 inmates and 137 staff members have tested positive for coronavirus so far.

The digging of mass graves and ordering of refrigerated trucks comes at a time when White House advisor and director of the National Institute of Allergy and Infectious Diseases, Dr. Anthony Fauci says we may be seeing a dampening of the outbreak.

On Tuesday Fauci noted that Americans are still “in a very difficult situation,” but that health officials are seeing “glimmers” that social distancing is working. “We hope and I believe it will happen that we may start seeing a turnaround, but we haven’t seen it yet. We’re just pushing on the mitigation,” he said on CNN.

The rate of new hospitalizations from COVID-19 in places such as New York are beginning to slow and are “possibly” beginning “to flatten out,” Fauci said. According to the Center for Systems Science and Engineering (CSSE) at Johns Hopkins University (JHU), America has the largest number of confirmed cases by far at 189,600 as of Wednesday morning. There are just over 4,000 deaths reported as well.