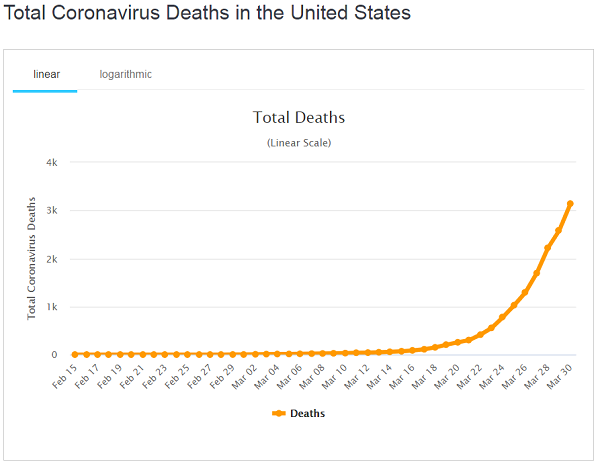 (Natural News) We’re all getting a little tired of hearing about coronavirus, but a new statistic underscores just why the disease is worthy of so much attention and concern: It is the third-leading cause of death in the U.S. at the moment.

In fact, coronavirus is killing more Americans every day than diabetes, stroke, lung disease and Alzheimer’s disease. Right now, 748 Americans are dying each day from coronavirus, which means it is outperformed only by heart disease and cancer at 1,774 and 1,641 deaths, respectively.

This is according to calculations that were carried out by a San Diego physician, Dr. Maria Danilychev, using data from the Centers for Disease Control and Prevention and the statistics and data website Worldmeters.

It was a different story in early March, when the disease caused between 0 and 50 deaths per day. On March 21, it started passing conditions like Parkinson’s, liver disease, sepsis, high blood pressure and lung obstruction. By March 25, it had climbed to seventh place before reaching fifth on March 27 and third the following day. It’s currently occupying third position on the list, displacing accidents, which kill around 169,000 people per year in the U.S.

Of course, it’s worth noting that the doctor’s charts look at the total coronavirus deaths for March against the average daily deaths of other causes. It may not be a direct comparison, but it’s easy to see how badly things could get if we continue at the current rates.

How high could deaths from coronavirus climb?

The director of the NIH’s National Institute of Allergy and Infectious Diseases, Dr. Anthony Fauci, told CNN he believes that anywhere from 100,000 to 200,000 Americans are going to die from coronavirus. Already, more than 45,000 people have died of the disease around the world, more than 4,000 of whom were Americans.

Meanwhile, the New York Times recently printed a graph that showed the number of deaths coronavirus is expected to cause during the next year with an infection rate of 30 percent and a fatality rate of .5 percent.

This chart estimates that the country could see more than half a million deaths over a period of one year, maintaining third place behind cancer, which is responsible for 599,274 deaths per year and heart disease, which kills 655,381 Americans a year. Even a small fraction of a change in the fatality rate, such as from .5 to 1 percent, could see coronavirus deaths becoming the leading cause of death in the U.S. at 956,000 fatalities.

Of course, a lot of factors are involved here. Many experts have said they expect a fatality rate of 1 percent, and documented fatality rates in some places are already higher than that. In places where hospitals lack space and equipment, higher death rates are being seen. Public health measures will also have a big impact on how many people ultimately become infected, as will individual adherence to the measures put in place, such as self-isolation.

For example, former CDC Director Tom Frieden has said his own estimates, which see no more than half of Americans becoming infected but a fatality rate of 1 percent, forecast 1.6 million deaths, but this is something he said could well be reduced by strategic public health efforts.

There are lots of different ways of looking at the numbers, but one thing is clear: This is a disease that is going to do a lot of damage and can be compared to the biggest killers of our time. That’s why it’s essential that everyone adheres to social distancing guidelines and prepares for things to get worse before they get better.