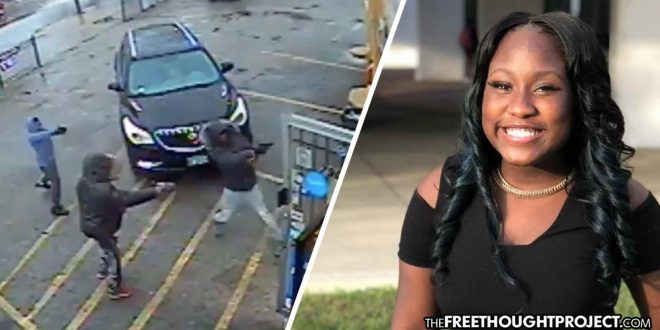 Chicago, IL — If you were murdered today, there’s only a 60% chance of police catching the person who did it. That number drops to 3% if you’re raped. However, as the following case out of Chicago illustrates, if you were observed by police grieving a murdered loved one, you will reportedly be arrested without question.

At the end of February, a tragedy unfolded inside a Chicago convenience store as an aspiring young college student was gunned down in a senseless mass shooting. Because the mass shooting happened in Chicago, it did not make major headlines and the five innocent victims, two of whom were children, weren’t plastered on mainstream media networks across the country. Lack of coverage in the mainstream media, however, does not mean that the life lost and the grief suffered weren’t tragically real.

According to Chicago police spokesman Anthony Guglielmi, the cowards who began shooting that day were targeting a boy inside the store. They missed him and hit five other people instead, killing 18-year-old Jaya Beemon, the daughter of Nyisha Beemon.

“It appears he (the boy who was not shot) was the target,” Guglielmi said. “They recklessly fired into the store and, tragically, an innocent woman was killed.”

The shooting was captured on the store’s surveillance system. The police department has a clear description of the killers and know the vehicle in which they made their escape. They have since offered a $12,000 reward for information leading to the arrest of any of these coward murderers.

Despite all this information, however, the only person police managed to arrest in relation to this case is Nyisha Beemon, Jaya’s mother — as she grieved for her daughter in the hospital.

According to Beemon, she was called to the hospital the day her daughter was murdered. When she saw her daughter’s lifeless body in the hospital ER, the grief was overwhelming and she passed out.

When she came to, Beemon explained that a police officer was dragging her from the ER.

“They said I wasn’t grieving appropriately,” Nyisha Beemon said. “That’s a lie … Grieving is not against the law.”

As the Chicago Sun Times reported, police said Beemon allegedly pushed and kicked an officer but later said the department would review the circumstances that led to the arrest. After she was arrested for grieving her slain daughter, at least one cop in the department with a heart paid her a visit.

Chicago Police Department director of public engagement, Glen Brooks paid Nyisha Beemon a visit to her home — before her daughter’s funeral — to apologize to Beemon for her arrest and tell her the charges were not going to be pursued.

Brooks told the Sun-Times he spoke with Beemon and told her that CPD “regretted the circumstances that led to the arrest and shared our deepest condolence for the loss of her daughter, Jaya.”

In March, Cook County State’s Attorney Kim Foxx’s office said that the charges were filed without their review, and that prosecutors would move to “quickly dismiss the charges, so that a grieving mother can mourn the loss of her daughter in peace,” according to the Sun Times.

“I’m grateful she removed them, but those charges will still be on my record,” she said, adding that she hopes her record will be expunged in the near future.

Nyisha Beemon told reporters that her daughter was in school at Malcolm X College, where she was studying to become a nurse, like her mother, who is a nurse and professor at the college.

To this date, Nyisha Beemon said detectives haven’t updated her on the investigation into Jaya’s death. The killers are still on the loose.

Perhaps Chicago police are too busy kicking in doors to the homes of innocent people, holding their children at gunpoint, and illegally interrogating them. After all, raiding drug dealers and taking their money and drugs is far more profitable than solving the murder of an aspiring young woman.