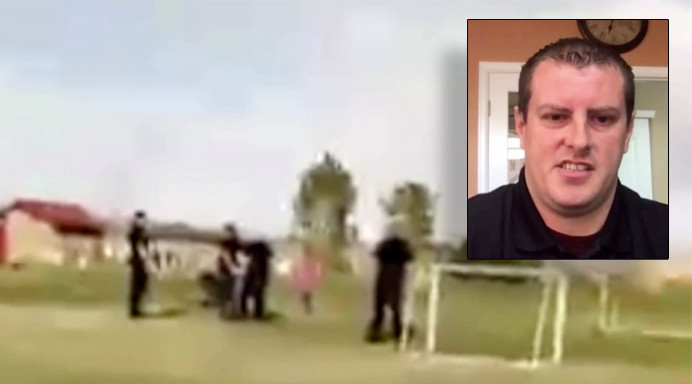 BRIGHTON, Colo. (KDVR) — Matt Mooney feels Brighton police owe him a huge apology. The 33-year-old says he was handcuffed at Donelson Park in front of his 6-year-old daughter Sunday afternoon after police told him he violated the state’s social distancing guidelines.

Mooney told the FOX31 Problem Solvers he refused to provide his identification to three police officers because he was confident he wasn’t doing anything unlawful by playing tee-ball with his wife and daughter at the park.

“She’s like, ‘Daddy, I don’t want you to get arrested.’ At this point I’m thinking, ‘There’s no way they’re going to arrest me, this is insane.’ I’m telling her, ‘Don’t worry, Daddy’s not going to get arrested. I’ve done nothing wrong. Don’t worry about it,’ and then they arrest me.” Local 31 Denver News

People need to slow down and start using their brain buckets, people are making snap decisions to detain people who they believe are violating the covid-19 regulations.  But let’s take a look at the reality of what exactly happened.

As The local News station stated the following:

The sign at Donelson Park said “Closed” but in smaller print reads, “in groups of no more than 4 persons, parks remain open for walking, hiking, biking, running and similar activities.”

Mooney was just there with his wife and daughter. He said it was the officers who were violating social distancing guidelines.“During the contact, none of the officers had masks on, none of them had gloves on, and they’re in my face handcuffing me, they’re touching me,” he said.

The former councilman was the one who recorded the incident on his cell phone and he said that the family was not violating any laws or regulations and was in accordance to the park regulations.  This is unacceptable and Police Departments are not allowed to violate our freedoms and our legal rights and people better make sure their local departments are hyper aware that our freedoms are not too be infringed upon during this pandemic.