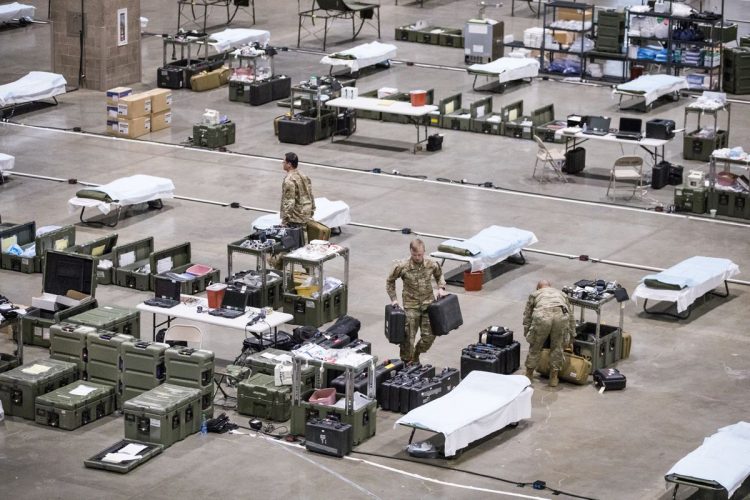 Think you got your money’s worth?  In Washington state, an Army-built field hospital is being taken down in Seattle.  After whatever ridiculous amount of money was spent on it, and the tyranny imposed to set it up, it didn’t treat a single patient.

SEATTLE — Even as some questions remain about the extent of the outbreak in Washington state, Gov. Jay Inslee Wednesday announced he would return to the federal government the field hospital recently assembled in Seattle’s CenturyLink Field Event Center to help the health care system cope with the new coronavirus.

With the USNS Comfort still stationed in New York, and the USNS Mercy in Los Angeles, Inslee’s decision could mark the first return of hospital beds to the federal government during the pandemic from anywhere in the nation.

Inslee in recent days has cited more favorable projections for what’s to come next in the outbreak of COVID-19 in Washington, the state that at one time led the nation in cases and deaths. As of Wednesday afternoon, there were 9,097 confirmed cases of coronavirus in Washington, with 421 deaths.

The University of Washington’s Institute for Health Metrics and Evaluation recently sharply reduced its estimate of how many Washingtonians are likely to die from COVID-19, and it has suggested the state may already have passed its peak for COVID-19 hospitalizations.

Still, those downward revisions come as state health officials have struggled to post full and timely reports for hospital admissions of patients with suspected or confirmed diagnoses of COVID-19.

In addition to the return of the field hospital, Inslee announced Sunday that he was returning 400 ventilators to the federal government’s national stockpile, to assist other states in worse shape.

In his statement Wednesday, the governor said the move to disassemble the field hospital will allow the facility to “be deployed to another state facing a more significant need.”

The field hospital, which just last week was toured by the Army’s chief of staff, never treated a single patient, according to Inslee spokesman Mike Faulk.

That’s right, hundreds of thousands of dollars were probably poured into this facility and the people manning it and yet, not a single patient showed up.  This is big government solutions, people.

“Don’t let this decision give you the impression that we are out of the woods,” Inslee said in a statement Wednesday. “We have to keep our guard up and continue to stay home unless conducting essential activities to keep everyone healthy.”

Right, because we all know we pass viruses on to one another, right Mr. Inslee? wink, wink, nod, nod.

The state asked FEMA and the Army Corps of Engineers to convert the football stadium “before our physical distancing strategies were fully implemented and we had considerable concerns that our hospitals would be overloaded with COVID-19 cases,” Inslee said.

“But we haven’t beat this virus yet and, until we do, it has the potential to spread rapidly if we don’t continue the measures we’ve put in place,” he said.

Inslee joined Seattle Mayor Jenny Durkan in praising the work of the Army’s 627th Hospital Center out of Fort Carson, Colorado, in setting up the field hospital, which closed only three days after opening for patients.

“These soldiers uprooted their lives to help Washingtonians when we needed them most. Since then, it’s become apparent that other states need them more than we do,” Inslee said.

How about we stop listening to people like this who don’t know a virus from bacteria, and stop putting people like Dr. Fauci and Dr. Brix on stage to keep pushing the narrative of lies about coronavirus and COVID-19 and put people like UK Nurse Kate Shemirani, Dr. Andrew Kaufman or Dr. Shiva Ayyadurai who actually tell the truth when it comes to all of this and the human immune system?  Because they are advancing a criminal agenda, a tyrannical one and we’re about to see the fulfillment of it very soon.