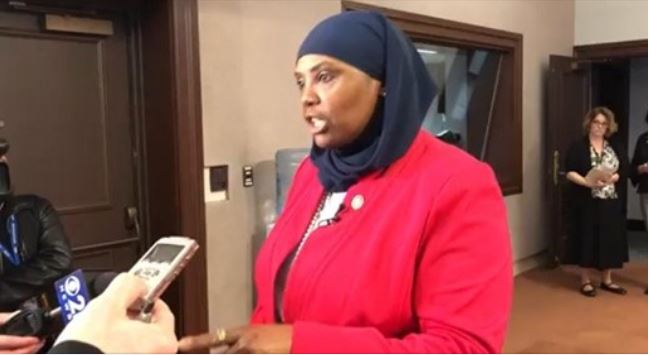 OPINION From Mark Sidney at We Are Biased OPINION Blog

Opinion| Mark Sidney| ICYMI| Another day another Democrat busted treating money they were trusted to safeguard and be the steward of as if it were their own piggy bank.

This time it happens to be a proud Muslim woman named Motiva Johnson-Harrell.

Motiva is a Democrat lawmaker in Philadelphia Pennsylvania. The allegations against the woman, if true, suggest her actions were absurdly obvious and brazen.

In essence there is over $1/2 million dollars that she is accused to essentially stealing to fund her extravagant lifestyle and to ‘buy’ her seat in the legislature.

The Gateway Pundit points out that “the crooked Democrat didn’t even serve one whole year in office and she is already resigning in disgrace — she is also facing jail time.

“Her theft knew no bounds,” Shapiro said as he announced that his office had charged the first-term lawmaker with theft, perjury, tampering with public records, and related crimes Wednesday morning.

Shapiro said Johnson-Harrell would plead guilty to charges and faces jail time. “There will be a guilty plea that will be worked out, and you will see the details of that soon,” he said.

The Gateway Pundit went on to report ‘Movita Johnson-Harrell “vigorously disputed” the allegations through a statement from her attorney.

“I am saddened and dismayed by the nature of the allegations brought against me today. I vigorously dispute many of these allegations, which generally pertain to before I took office, and I intend to accept responsibility for any actions that were inappropriate,” she said.

Recall, Movita Johnson-Harrell was just elected in March of this year in a special election when she attacked a Christian state lawmaker who prayed to “Jesus” during her swearing-in ceremony as “blatantly Islamophobic.”

The Muslim lawmaker called for Republican State Rep. Stephanie Borowicz to be censured over her Christian prayer.;

Movita Johnson-Harrell didn’t even last one year in her job before being forced to resign after attacking a Christian woman and stealing money from her own charity to fund an extravagant lifestyle.’

What the hell is this country coming to? Quite frankly, I could not care less what the faith of a lawmakers is. I would be thrilled to have a Muslim member of Congress who revered the US Constitution, the rule of law (US law based on the Judeo-Christian ethic) and respected the rights of all to worship as they see fit.

However, there seems to be a pattern developing here that is very worrisome. Two examples of this are Ms. Movita Johnson-Harrell and Ilhan Omar.

Now, the allegations against them both, are as of now, just that, allegations. No one has been convicted of anything. However, the charges against the who woman are very similar in substance.

Essentially they are both accused of using funds they were trusted to be the stalwart guardian of improperly.

To be fair, this is not a problem limited to only Muslim members of the legislatures, nor just to Democrats. Actions like these, and how widespread they are, is the very reason Donald Trump is sleeping at 1600 Pennsylvania.

Our country is infected with a disease named corruption. Both parties and all levels of government have been compromised, and either we amputate the gangrenous areas, or the whole body will die. And if the whole body dies, there is no telling just how bad things will get.

The time to act is now. Flood social media with as much truth as you can before they shut these channels down for good.

Make no mistake we are in a battle for the very existence of our God given rights. If we do not act now, all will be lost. Think of the world we will leave our children if we do not rid our institutions of these authoritarian kleptocrats before they take complete and total control.

I suspect you are with me when I say, I will not let this happen without doing all I can to stop it.

*This article may not be reprinted without expressed permission from We Are Biased OPINION Blog.