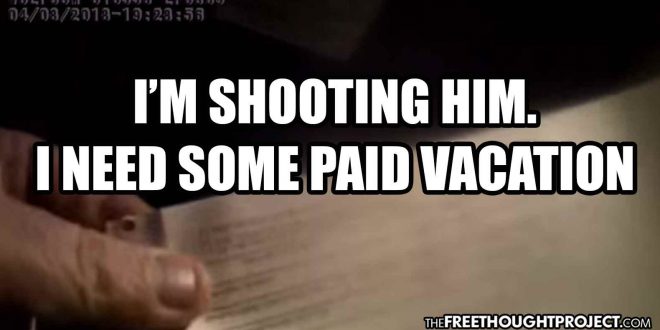 LaSalle, CO — Frequent readers of the Free Thought Project know and have seen many examples illustrating that cops will detain, harass, and violate the rights of innocent people simply because they can. We’ve even seen innocent people sodomized on the roadside by cops looking for non-existent drugs. A common theme throughout all these examples of bad cops is the paid vacations they receive after brutalizing, violating, and killing innocent citizens. Never, however, have we heard a cop actually say they were going to kill someone just to get a paid vacation — until now.

Anthony Mills filed a civil rights lawsuit this week against the city of LaSalle as well as LaSalle Police Officer David Miller. Officer Miller was recorded on his own body camera conspiring to murder Mills. According to the lawsuit and the video, Miller had no idea his microphone was recording when he and another officer conspired to kill the biker.

The incident unfolded on April 8, 2018 as Mills and another friend were riding their motorcycles. Mills is a member of the Hells Angels Motorcycle Club (HAMC). As part of the lawsuit, officer Miller’s body camera footage was released. What it shows is nothing short of criminal conspiracy to commit murder so receive a paid vacation.

The Motorcycle Profiling Project uploaded the video to Facebook this week, describing how the incident unfolded.

A civil rights lawsuit filed on April 6, 2020 involving Hells Angels Motorcycle Club member Anthony Mills (Mills v. LaSalle, Colorado et.al. Civil Action No. 20-CV-965) alleges that, during a routine traffic stop for alleged speeding, law enforcement officers violated Mills 1st, 4th, and 14th Amendment rights. Specifically, video reveals that law enforcement in Colorado targets the HAMC as a matter of policy and holds them for as long as possible without reasonable suspicion or probable cause. Most frightening, however, is after officers are recorded bragging and laughing about tasing motorcyclists off their bikes, LaSalle Police Officer David Miller terrorizes and directly threatens to shoot Mills for paid vacation because he thinks his body mic is turned off.

Miller’s body cam is definitive proof that motorcycle profiling exists, and that life could be the ultimate impact. The National Council of Clubs, representing the interests of motorcycle clubs and their members nationwide, believes that justice demands ALL officers involved, particularly officer Miller, should be immediately relieved of their employment and criminally charged.

Indeed, law enforcement should be held to the highest standard, and officers should be held accountable to at least the same degree as any other person in society.

As the video shows, Miller pulls the bikers over and tells them they were “going way too fast.” After getting their information, Miller goes back to the car where he conspires to violate their 4th Amendment right to be free from unreasonable search and seizure.

“I have no problem holding these motherf**kers until Greely gets down here,” Miller says. Greely is a police department in a neighboring county and Miller was going to apparently show off his catch. The officer then goes on to admit he profiled the bikers and admits their department has a policy of violating their rights.

“So, they have on Hells Angels jackets. Any time we deal with these guys, we call in code….so,” the officer says. Miller’s fellow officer also conspires to violate the rights of the bikers as well. They alert nearby jurisdictions, telling them they also plan on violating the bikers rights.

As they wait for officers from the Greely police department to arrive, Miller expresses his excitement in violating the rights of the bikers.

“I’m good, I’m alright, I mean, we get to f**k with HAMC,” the bad cops says before admitting that he almost tasered the bikers as they were riding down the road.

“I almost tazed the guy off the motorcycle,” Miller says, admitting to an act that could be classified as attempted murder. “He tried to go around me while slowing down, so I was going to taze him but he had a passenger on the back of the bike, so.”

That is when one of the most telling admissions we’ve ever reported on was made by this tyrant cop.

An unidentified officer is heard in the background saying, “If either one of them gets it, it’s the tall dude.”

Miller then says, “I’m shootin’ him. I need some paid vacation.”

“Hahaha,” the other officer laughs before agreeing with Miller. “That’s what I am saying. If any one of them gets it, it’s the tall dude.”

As Mills waited patiently on his motorcycle in front of the officers, he had no idea, they were plotting his murder 20 feet behind him. But that is exactly what was going on.

After plotting to murder the innocent biker, the unidentified cop realizes that they may be recording themselves on their body cameras. “We have body cameras?” he asks.

“We do, but they are off,” Miller replies. But they were not off and these cops were caught red-handed. After plotting murder, the cops then brag about stealing their motorcycle and searching it without probable cause.

Now, the taxpayers will undoubtedly be held liable for the actions of these two tyrants and their policy to profile, violate, and plot murder.

Officer David Miller is still a cop with the LaSalle department.

Courtesy of FTP
Matt Agorist is an honorably discharged veteran of the USMC and former intelligence operator directly tasked by the NSA. This prior experience gives him unique insight into the world of government corruption and the American police state. Agorist has been an independent journalist for over a decade and has been featured on mainstream networks around the world. Agorist is also the Editor at Large at the Free Thought Project. Follow @MattAgorist on Twitter, Steemit, and now on Minds.
Share
Tweet
Share
Pin