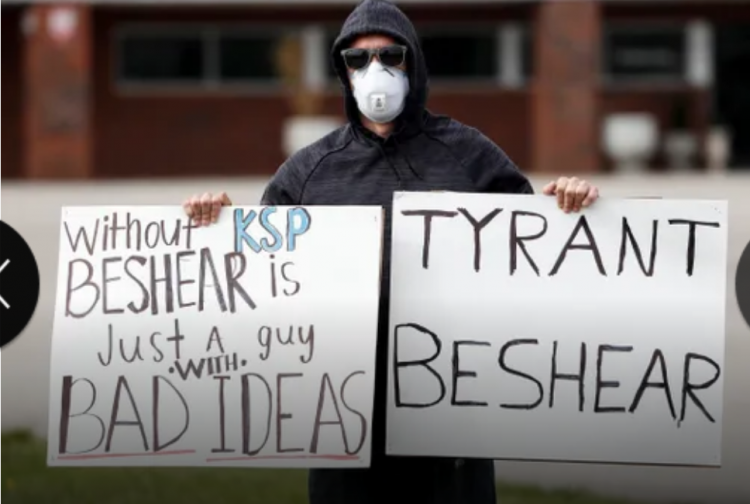 This is a good story!  The people of God must throw off the chains of tyranny and meet together for worship and do the work of ministry to those in need without responding to the Lord’s claims about doing unto Him with “But Lord, da corona!”  Kentucky tyrant Governor Andy Beshear issued his unconstitutional ban on these kinds of meetings but the people aren’t’ having it, and they demonstrated it this past Lord’s Day.

Maryville Baptist Church appeared to have a near-full house for its Sunday service despite orders to avoid in-person services — and the heightened risk of catching COVID-19, the Louisville Courier Journal said.

Worshipers arrived even after police warned that they would record their license plates to force them into 14-day quarantines.

Many — including the defiant pastor, the Rev. Jack Roberts — arrived with their plates covered, with officers instead recording their VIN numbers, the paper said.

Even more desperate measures appeared to have been taken to keep the faithful away — with “piles of nails” blocking each entrance, according to photos shared by the Courier Journal.

It was not clear who had left the nails, which were eventually cleared by church volunteers in time for the main arrivals, the paper said.

Kentucky state troopers then left large signs on every car left in the church lot, the paper said — accusing those present of “CREATING SCENES OF AN EMERGENCY.”

They noted that everyone in the car owner’s household would be forced to quarantine for 14 days for defying the warning — an order that several worshipers told the Courier Journal they planned to ignore.

That’s right, the new Nazis in the united States actually threatened the people of God (getting the picture now?)

Thought Beshear has said that he will not instruct his Gestapo to “padlock doors or arrest pastors,” the fact of the matter is he has already overstepped his bounds as governor of Kentucky so, what makes anyone think he won’t do that in the future?

“To our knowledge, 99.89% of all churches and all synagogues and all mosques in Kentucky have chosen to do the right thing,” Beshear said Saturday, adding he was “just doing my best to save lives.”

He’s not doing his best to save lives or he would educate himself on the issue that a person cannot pass a virus on to another person and he would tell the truth about it, but he isn’t, just like so many in positions of authority.

They run with a fear narrative rather than the truth and that is costing lives.

While Pastor Roberts claimed that he is “not interested in trying to defy the government,” the fact of the matter is he is commanded by Scripture to do so when government acts unlawfully.

Then Peter and the other apostles answered and said, We ought to obey God rather than men.

God is to be obeyed even in the light of how tyrants paint the picture of saving lives and endangering others.

No one is in danger by the people of God meeting together to worship the one our country was founded upon and to hear the exposition of His Word.

A federal judge ruled Saturday that the mayor of Louisville’s “stunning” ban on drive-in Easter church services was “unconstitutional.”

By the way, here are a few of the new Nazis that need to be marked. If they are doing this now, they will obey unconstitutional orders in the future.