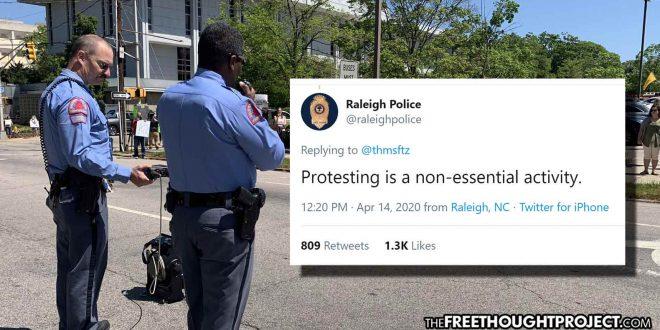 “Congress shall make no law respecting an establishment of religion, or prohibiting the free exercise thereof; or abridging the freedom of speech, or of the press; or the right of the people peaceably to assemble, and to petition the Government for a redress of grievances.” — Amendment 1, United States Constitution

Raleigh, NC — The state of North Carolina is one of the least affected states in the country with regard to the current COVID-19 outbreak. With just over 5,000 confirmed cases and only 108 deaths related to the virus, many citizens are growing wary of the state’s lockdown order and are demanding things go back to normal.

On Tuesday, more than 100 protesters took to the city streets of Raleigh, North Carolina to voice their desire to reopen the state’s economy. They were quickly met with police action but the well-organized protesters stood their ground through multiple threats.

According to the News and Observer, the protest was organized by ReopenNC, a private Facebook group organized last week that wants people to make their own stay-at-home decisions to avoid exposure to COVID-19 as the worldwide pandemic continues. The group surpassed 28,000 members on Tuesday afternoon.

When the protest began, the Raleigh police department put out a tweet that is sure to go down in history books as they declared the Constitutional right to peaceably assemble, otherwise known as the First Amendment — “non-essential.”

Protesting is a non-essential activity.

During the protest, the police department filmed their officers ordering the crowd to disperse as their commands fell on deaf ears.

“You are in violation of the executive order,” said a police captain. “You are posing a risk to public health. If you do not disperse, you will be taken and processed at Wake County jail.”

Every 15 minutes during the protest, roughly 50 cars honked their horns in unison.

“You should be ashamed of yourself,” said one protester.

“Are you goons of Cooper or servants of the people?” said another, in reference to governor Roy Cooper’s executive order.

“We are in violation of Comrade Cooper’s order,” said Leonard Harrison of Mebane. “If I get locked up today, I’m OK with that. As North Carolinians, we need to get back to work.”

After multiple threats of arrest and police force, most of the protesters finally began to disperse — only under duress.

One person did get locked up, however, and that was Monica Faith Ussery, 51, of Holly Springs. She was charged with violating the executive order to stay at home.

“I have a right to peacefully assemble,” she said as officers led her away, her hands bound with a zip tie. “God bless America.”

After the protest on Tuesday, the Raleigh police posted video of it online.

They were met with massive backlash. Nevertheless, Raleigh police and the governor’s office doubled down on their decision.

“Some people want to completely obliterate these restrictions,” Governor Cooper said . “It would be a catastrophe. The numbers are very clear that the interventions that we’ve entered into — social gatherings, limitations on bars and restaurants, the stay at home order — those kinds of things are working.”

As the Observer reports, in a statement Tuesday night, the Raleigh Police Department stood by its tweet as well as officers’ obligation to enforce the stay-at-home order during “these unprecedented times and unusual circumstances.” They said there’s no exemption spelled out in state and Wake County stay-at-home orders for protesting like there is for other “essential” activities.”

“But more important is the health and wellness of all who live in our community, including the officers who must engage in circumstances such as these,” the statement said. “We simply want everyone to be safe during this very serious public health crisis.”

The protest was not in vain. According to reports, it sparked a conversation among officials on how to proceed with possible future protests as well as reopening the economy.

In an email to The News & Observer, Raleigh police said they are “having ongoing conversations with Wake County officials and the Wake County District Attorney’s Office on the scope and enforcement” of both the local stay-at-home order and the statewide order.

The Raleigh Police Department added in its statement: “The Wake County District Attorney is the individual who decides charging language for failure to adhere to the Governor’s Orders and the Wake County Proclamation, when charging is appropriate, and what charges individuals may face for violating either one of these orders.”

As more people grow tired of watching their life savings diminish and their local economies turn to dust, rest assured that more protests like this one are inevitable. Instead of brute force and fear, it may be time to rethink the solution to COVID-19.

No one here is discounting the severity of the coronavirus. However, multiple experts have stated that social distancing and lockdowns may be a temporary fix and may only be serving to suppress the virus.

“I think they did an amazing job of knocking the virus down,” said Michael T. Osterholm, director of the Center for Infectious Disease Research and Policy at the University of Minnesota, in regard to China’s lockdown. “But I don’t know if it’s sustainable. What have the Chinese really accomplished? Have they really contained the virus? Or have they just suppressed it?”

Doom is a mathematical certainty of this prolonged economic scenario in which we currently find ourselves. There is fight and there is flight when it comes to all situations, especially COVID-19. Running from it in flight mode is sending us back to food lines and doing possible irreversible damage to America’s economy. I don’t know what the fight mode looks like yet, but it’s high time we start discussing it.