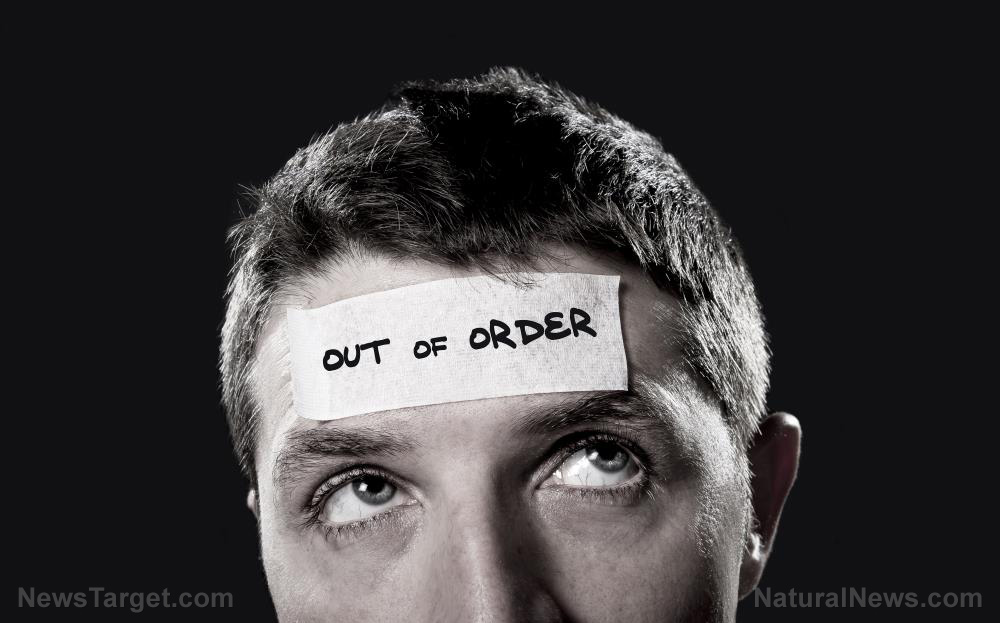 (Natural News) As you might have expected, the masses are totally delusional in their beliefs about the coronavirus pandemic and the economic “recovery” that’s being hyped by the president.

Why do so many Americans have delusional beliefs about all this? For starters, because the mainstream media is a “stampede of morons” featuring guests like Dr. Phil who know nothing about epidemiology and can’t seem to understand basic integers. But another reason is that mainstream media outlets tend to report whatever they think their audience wants to hear, and this creates echo chambers of stupidity on both the left and the right.

According to the left-wing media, every coronavirus death in America is a murder that was committed by Trump. In the right-wing media, the entire pandemic is a hoax and isn’t even very infectious, and therefore all lockdowns should end immediately because they weren’t necessary in the first place.

Both views are total nonsense.

We are supposedly past the “peak” of hospitalizations and deaths in America, and many Americans now believe that everything will be back to normal in just two weeks.

The curve of daily new cases in the United States has flattened very near the peak, sustaining around 30,000 new diagnosed cases each day: 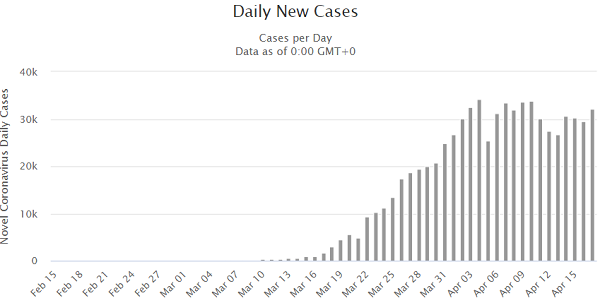 The daily deaths curve is still on the upswing, by the way, although we hope it will start flattening from here forward.

New York has already seen 900 deaths per one million population, but Pennsylvania, where cases are rising at a high rate, has so far only experienced 75 deaths per one million. And California has only seen 27 deaths per million. That means the infections and deaths still have a long way to go for most of the country, and lockdowns can only be lifted with extreme precautions in place for social distancing, mask wearing and expanded testing.

Delusion #2) A vaccine will solve everything

Every minute of the day, some news pundit or ignorant doctor claims a vaccine will solve the coronavirus pandemic, even when no such vaccine has ever been subjected to rigorous clinical trials.

Every person saying a vaccine will solve this is, of course, a quack. There isn’t a shred of evidence that vaccines will ever work against this RNA-based virus.

In fact, according to this 2015 research article on coronavirus and their methods of replication, indexed at the National Library of Medicine, it’s likely that no vaccine will ever work against this type of virus.

Interestingly, this research was funded by the Pirbright Institution, which is partially funded by Bill Gates. The study states:

Only limited options are available to prevent coronavirus infections. Vaccines have only been approved for IBV, TGEV, and Canine CoV, but these vaccines are not always used because they are either not very effective, or in some cases have been reported to be involved in the selection of novel pathogenic CoVs via recombination of circulating strains.

…[T]he propensity of the viruses to recombine may pose a problem by rendering the vaccine useless and potentially increasing the evolution and diversity of the virus in the wild. Finally, it has been shown in FIPV that vaccination with S protein leads to enhanced disease.

In other words, the vaccine will probably make the outbreak far worse by accelerating viral evolution and leading to “enhanced” (i.e. exaggerated) immune responses in humans that end up killing more people than the covid-19 pandemic itself.

Delusion #3) The economy will “bounce back” almost immediately

There exists a widespread delusion that the US economy will come roaring back immediately upon lockdowns ending. This belief, however, belies many simple truths in the way social behavior has already radically changed because of the coronavirus. For starters, people aren’t going to start rushing back to restaurants, movie theaters and other public places, especially as new infections begin to climb again following the ending of the lockdowns.

Even more importantly, you can’t re-inflate a debt-based economy with more debt. Many of the businesses that were running on debt have collapsed beyond the point of resuscitation. They cannot be reanimated with endless injections of bailout money, no matter how large the bailouts.

Finally, the paycheck protection program (PPP) will actually hurt the recovery by paying employees more money to stay home than they might make from going back to work. Since it now looks like the Trump administration is going to keep shelling out free money all the way through the election — essentially a shady way to “buy” the election with bribes — there’s no chance the US economy will get back on track in real-world terms, since too many millions of workers are being paid to stay home and (eventually) vote for Trump, he hopes.

It begs the question: Why isn’t Trump fighting for the free speech rights of his supporters who are being decimated by politically-motivated de-platforming bans on Twitter, Facebook and elsewhere? The answer seems to be because Trump thinks he can buy the election with bailout money. It’s shameful.

Wall Street numbers are all faked now, by the way, since the Fed is buying up and bailing out everything in sight. No real markets are functioning in the USA anymore, and legitimate price discovery is a distant memory. It’s now clear that Trump and the Fed are going to try to rig Wall Street through election day and pretend that an artificially large bubble at stocks will somehow make people forget about the fact that they’re unemployed and have essentially been turned into welfare kings and queens all across America, collecting government checks while producing nothing useful for the economy.

Even if Trump wins, America loses because Trump has abandoned free markets and free speech. I’m actually glad he’s demanding his name on all the bailout checks, by the way, so that America never forgets who drove this nation into tyranny and collapse when he could have chosen freedom and abundance.

Delusion #4) Almost everybody has already been infected

This particular delusion is being pushed by conservative publishers who continue to try to pretend the coronavirus pandemic is almost over (and was never really that bad to begin with). In this delusion, people pretend that almost everybody has already been infected, claiming that so-called “herd immunity” has probably been reached already. This then becomes an argument to reopen the economy immediately, without any precautions against future infections.

The problem with that argument is that it’s pure bunk.

With actual infection rates still low, the frequency of false positives is very high due to lack of specificity in covid-19 testing. Most of the “positives” currently emerging are false positives. There is a clear, mathematical explanation for this which I hope to have time to cover in a follow-up math article, but it’s a well-known phenomenon that when diseases have a very low rate of infection in the real population, any small aberration of false positives in the testing gets amplified across the data set, resulting in far larger numbers of “positives” than really exist. This is also true in breast cancer testing, where the vast majority of “positive” mammogram test results are actually false positives.

Interestingly, a theory has also emerged across the independent media that claims any person who previously took a flu shot will test positive for covid-19. If this is true — and we’re not yet convinced of that — it means the number of infections is being wildly overestimated, which therefore means the fatality rate of those who are really infected is much higher than what’s being calculated currently.

Even if you were to make a wild leap to 5% of the US population being infected already (which certainly hasn’t been reached yet), that means we’re only 1/16th of the way through this pandemic, since you’d need about 80% of the population (or more) to be immune in order to halt the cycle of exponential replication from herd immunity.

By any realistic measure, this pandemic has only just begun. We are living through the opening chapter, not the closing scene. Any effort to end the lockdowns without taking extreme precautions against further spread will only result in renewed explosions, new waves of hospitalizations and more deaths.

The fascist government has zero interest in helping the people. The bailouts are entirely designed to bail out the wealthy corporations and the banks. The only reason why money is being mailed out to the masses is in the hopes that they will use the money to pay bank loans and credit card debts. In other words, the bailouts are the government’s way of bailing out the banks via the consumers who owe money to the banks.

Even more importantly, this money isn’t “free.” There’s no such thing as free money. All the fiat currency money printing comes out of our pockets sooner or later via taxation or confiscation.

Every dollar sent to a bank or a corporation as part of the bailout scheme is a dollar that must be stolen from the American people one way or another. Large-scale bailouts are really nothing more than large-scale looting of the pockets of the American workers.

Once the bailouts begin, everybody scrambles to get their share of the bailout in order to avoid being left behind. It’s rational to accept bailout money if the bailouts are under way, since you need the extra cash to compensate for the erosion of the purchasing power of the dollar that’s being accelerated by the bailouts themselves.

In the end, however, everyone loses as prices for consumers goods and services skyrocket due to an increased supply of fiat currency chasing a limited supply of goods. It’s Economics 101.

If you thought the great toilet paper panic of March, 2020 was the last panic you’d see this year, think again: Delusional thinking about this pandemic is so widespread that a whole new wave of panic is inevitable.

Panic is what happens when peoples’ delusions collide with reality. And since everybody is being lied to by the mainstream media and the social media tech giants, where Facebook “fact checks” every post to make sure it aligns 100% with communist China, the American people are living under a cloud of fascist delusions and deliberately deceptive disinformation that’s designed to mislead everyone.

All voices of reason and truth are censored and silenced, while the corporate deceivers and liars of the media dominate the airways with nothing but Goebbels-class propaganda.

That’s why it’s crucial to use Brighteon.com to bypass the censorship of the controllers. To follow my own podcasts, visit the Health Ranger Report channel on Brighteon: