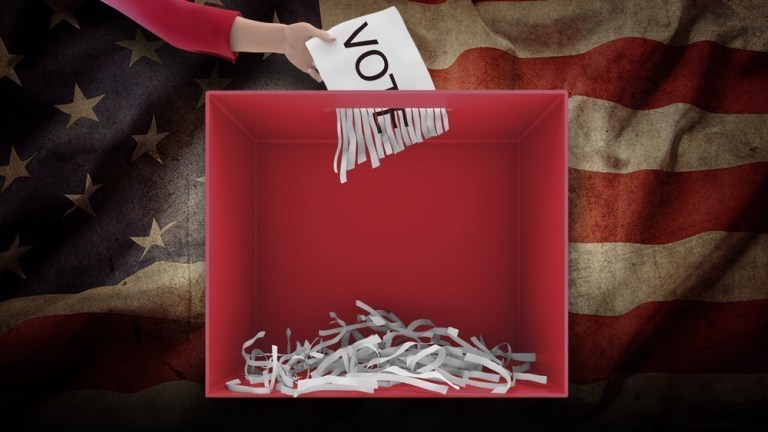 (TNS) The vast majority of reporters and editors who comprise “the mainstream media” in the U.S. are the most uncurious, hyper-partisan bunch of Leftists in the country.

The reality is, they’re not really journalists: They are Democrat Party activists who disguise themselves as journalists.

They prove it every single day.

What’s more, they’ve really been outed in the Age of Donald Trump with their “Orange Man Bad” schtick. No matter what the president says, their instinctive responses are, ‘He’s wrong.’ ‘He’s lying.’ ‘He’s stupid.’ ‘He’s an oaf.’

And most of the time, when all is said and done, we find that it’s President Donald Trump who is right and the perfumed, blow-dried, shellacked princes and princesses of the MSM who are wrong.

Take the issue of mail-in balloting and vote fraud.

Last week, amid the ongoing coronavirus pandemic, the president managed to comment on the House Democrats’ push to add a nationwide mail-in balloting measure to the next relief bill.

“There is a lot of dishonesty going on with mail-in voting,” Trump said Tuesday. It wasn’t an off-the-cuff comment. The fact is — again, the fact is — he’s right.

Mail-in balloting combined with vote harvesting, a la California style, resulted in losses of several solidly Republican congressional seats in that state during the 2018 midterms.

Democrats used a newly-enacted law that allowed anyone to collect ballots from anyone else, and they did: The results, as former U.S. Rep. Jason Chaffetz (R-Utah) noted in September, were devastating for Republicans in a state where there aren’t many elected to public office to begin with:

The process of ballot harvesting should be illegal for very good reason. It violates the chain of custody, exposing the ballot to potential manipulation by campaign operatives or nonprofit political groups. They could harass voters to turn in ballots, “assist” them in filling them out, and potentially “lose” ballots that don’t support the candidate the ballot harvester is paid to help.

The indication that ballot harvesting made the difference in California can be found in the vote proportions. Studies of absentee voters have consistently shown they tend to reflect the population or lean slightly to the right. But when ballot harvesting was deployed in California, we saw late ballots break heavily for Democrats. …

The San Francisco Chronicle reported that elsewhere in the state, Orange County voters on election night 2018 were calling the registrar’s office asking if it was legitimate for someone to come to their door and ask if they could take their ballot.

Who was coming to the door? According to a January 2019 Los Angeles Times story, illegal Dreamers were deeply engaged in the process — not just delivering ballots, but helping voters fill them out.

Chances of increasing vote fraud are also why Democrats consistently oppose any Voter ID laws and other efforts to require people to prove who they are and that they have a right to vote as a citizen.

It’s also why Democrats oppose Judicial Watch’s efforts to force states and jurisdictions to comply with federal voter registration laws by cleaning up and updating their registration rolls. The group reported in January it had found millions of “extra” registrants on outdated voter registration lists around the country.

Which brings us back to the Democrats’ push to extend California-style mail-in voting and ballot harvesting to the entire country.

Under such a system, ballots are mailed to every address on registration rolls. So they’d be going to the outdated addresses and to addresses of people who had died or moved. ‘Activists’ would pick up those ballots, quote-unquote, after filling them out, casting votes for the Democrat candidates on the ballots. Easy peasy. That’s precisely what happened in California.

But when President Trump brought this up, he was immediately ‘fact-checked’ by some of the most dishonest media outlets in our country — outlets that define the president’s definition of “fake news.”

“In response, a CNN ‘fact check’ declares that Mr. Trump ‘opened a new front in his campaign of lies about voter fraud.’ A New York Times headline asserts: ‘Trump Is Pushing a False Argument on Vote-by-Mail Fraud.’ Both claim that voter fraud is essentially nonexistent,” John R. Lott, president of the Crime Prevention Research Center, wrote in The Wall Street Journal this week.

In fact, as Lott noted, the conclusion of the bipartisan 2005 report of the Commission on Federal Election Reform on the subject was thus: “Absentee ballots remain the largest source of potential voter fraud.”

Who was on that panel? It was co-chaired by former Secretary of State James Baker and former Democratic President Jimmy Carter.

Intimidation and vote buying were key concerns of the commission: “Citizens who vote at home, at nursing homes, at the workplace, or in church are more susceptible to pressure, overt and subtle, or to intimidation. Vote buying schemes are far more difficult to detect when citizens vote by mail.” The report provides examples, such as the 1997 Miami mayoral election that resulted in 36 arrests for absentee-ballot fraud. The election had to be rerun, and the result was reversed.

— In 2017 following the result of in investigation into a Dallas City Council election, officials found 700 fraudulent mail-in ballots that were signed by the same witness using a phony name. The discovery of this fraud left two council races in limbo; it also resulted in a criminal conviction.

a Dallas City Council election found some 700 fraudulent mail-in ballots signed by the same witness using a fake name. The discovery left two council races in limbo, and the fraud was much larger than the vote differential in one of those races. The case resulted in a criminal conviction.

— “In a 2018 North Carolina congressional race, Republican Mark Harris edged out Democrat Dan McCready by 905 votes,” Lott writes. In that race, the same kind of mail-in ballot harvesting was done on behalf of Harris; only in North Carolina, the practice is illegal. The race was deemed null and in a rematch, McCready won the House seat after Harris bowed out.

— Another tactic is listing an impossible number of people at the same address. “In 2016, 83 registered voters in San Pedro, Calif., received absentee ballots at the same small two-bedroom apartment. Prosecutors rarely pursue this type of case,” Lott wrote.

Finally, always remember, Democrats would not be pursuing mail-in balloting and vote harvesting if they didn’t think it would give them an advantage politically.

President Trump knows this. And last week, he was right again.