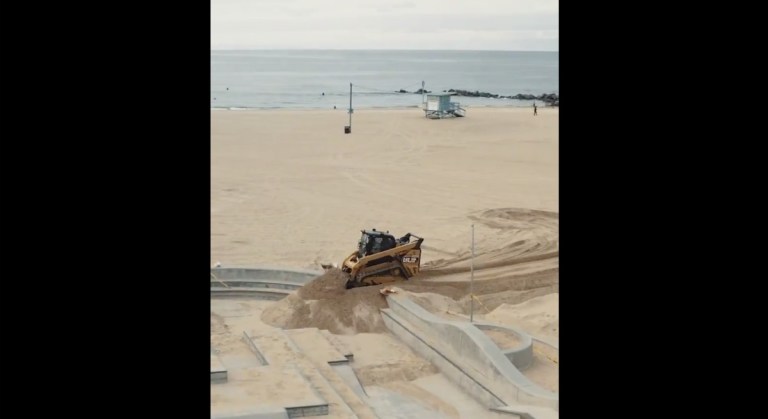 (TNS) In the same week President Donald Trump issued new guidelines to reopen the country running again as the coronavirus pandemic begins to subside, one Democrat-run city spend a lot of taxpayer money to fill in a skate park — to ensure ‘social distancing’ rules were being followed.

As some pointed out on social media, there is no logical reason for this act. None.

California is filling their skate parks with sand to make them unusable amid mandated lockdown.

California is filling their skate parks with sand to make them unusable amid mandated lockdown.

And, as BizPac Review notes, the park’s closure has real-world implications for residents:

City officials in one California community have covered a local skate park with sand to keep bored teenagers out, thus reportedly leaving one diabetic teen who “needs to stay moving” in an exceptionally tough spot, and also raising the ire of liberty-minded conservatives.

“Noli Stark and his mom sat in their car in the parking lot looking at San Clemente’s popular skate park, gates shut and sand covering the surface of his favorite playground,” the Orange County Register reported last Thursday.

According to his mother, Jen, it was her diabetic son’s “last bit of freedom.”

“It was all he had left. He was devastated,” she said.

But to hear local officials tell it, kids on skateboards are “the greatest public-health threat imaginable,” as Republican Sen. Ted Cruz put it in a tweet posted late Saturday…

2/2 And to all the Lefties defending California’s idiocy, skating alone poses ZERO public health threat to anybody. You want to enforce social distancing in public spaces, fine, but filling a skate park with sand—so nobody can use it—is authoritarian abuse of power.

“…[F]killing a skate park with sand — so nobody can use it — is an authoritarian abuse of power,” the Texas Republican notes. That’s certainly true.

It’s also an incredibly wasteful abuse of taxpayer funds which were no doubt used to build the skate park in the first place. If there is a better example of “the government giveth, the government taketh away,” we’d like to see it.

Taxpayers can be made to pay for these amenities but they have no say when rulers deny access to them.

Cruz isn’t the only one who sees this act for what it is — tyrannical.

“The move by the city to cover the concrete at the Ralph’s Skate Court with gritty, grainy sand has local skaters irked, wondering if such drastic measures were needed to keep people out of the park. Some wonder if the sandy surface may damage the skate park tucked in the hills of the seaside community,” the Register noted.

Almost certainly nobody at City Hall thought about what kind of damage could be done to the park, only that they were going to close it, community be damned, and to Hades with you peon citizens if you don’t like it.

This certainly isn’t the only act of tyranny in the country, just one of the most egregious. Such acts are being repeated all over, and with greater frequency.

The point is this: Americans can appreciate government’s concern about a public health issue without having to endure blatant acts of tyranny. There can, and should, be balance, and in a lot of places around the country — South Dakota comes to mind — there is balance.

But in places where Democrats rule, there seems to be little or no consideration whatsoever given to civil and constitutional liberties, let alone responsible stewardship of taxpayer resources, as evidenced by decisions to fill in skate parks with sand over ‘muh coronavirus.’