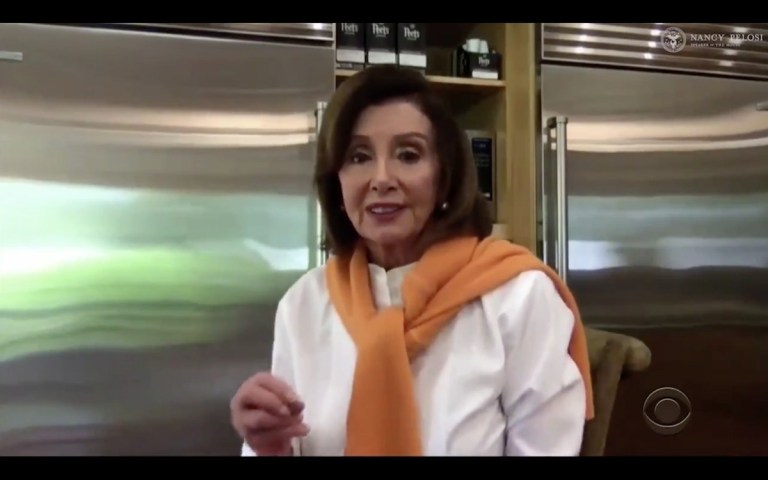 (TNS) Last week, we were appalled to see the “Late, Late Show with James Cordon” give House Speaker Nancy Pelosi (D-Calif.) air time so she could show America how well a multi-millionaire lives in tough economic times.

While more than 22 million Americans were filing for first-time unemployment benefits after losing their jobs thanks to state-mandated closures of their ‘non-essential’ businesses, the display was one of the most tone-deaf, clueless, and disgusting things we’d seen in a long time.

Because at the time, Democrats led by Pelosi were blocking new legislation that would provide hundreds of billions of dollars to the Small Business Administration for dispersal to tens of thousands of struggling business owners who are teetering on the edge of bankruptcy.

To this day, Pelosi and her Democrat Party continue to block that funding.

And let’s be honest — if the situation was reversed and it was Republicans who were behaving in a similar nature while tens of millions of Americans were out of work and panicked about their future, the worthless, garbage media would be losing their minds (even more than they normally do every time President Trump takes another breath).

Speaking of small businesses teetering on the brink of permanent closure, a new survey from the Independent Restaurant Coalition found that 4 of 5 bars and restaurants — or 80 percent of those currently shuttered due to government-mandated coronavirus closures — may never reopen.

Armed with new data showing that restaurants and bars accounted for 60 percent of the U.S. jobs lost in March, representatives of the Independent Restaurant Coalition renewed their call to Congress for more, and better, federal assistance for the industry’s 11 million workers.

In a conference call Thursday afternoon, the coalition reiterated that the recently passed CARES Act and the Paycheck Protection Program fail to meet the unique needs of independent restaurants — many of whom, the group said, risk permanent closure.

Earlier Thursday, the U.S. Small Business Administration announced that the $349 billion Paycheck Protection Program had run out of money, and wouldn’t be accepting more applications, essentially shutting small restaurants out of the program.

Republicans are baffled, frustrated, and angry — and with good reason. This kind of heartless, cruel political expediency is a new low for a party that sets records for new lows.

In the last 4 hours, over 20,000 #PPPloans went unprocessed because @SpeakerPelosi & @SenSchumer are blocking more funding. We are fighting to save jobs & small businesses. What have they fought for?

… Prohibiting states from requiring an ID to vote. https://t.co/jWyJCpqry0

Some in the media are responding with reports, including Jennifer Jacobs of Bloomberg News.

It took 13 days for small businesses to tap pot of money Congress designated for PPP loans, meant to help keep workers on payroll, cover rent for 2 months. Many biz owners have messaged me that they’re still waiting for lifeline. Loan apps not approved yethttps://t.co/4txYh90px3

You know who isn’t responding? Democrats. Led by Nancy Pelosi, the decadent chocolate-and-gourmet ice cream connoisseur who isn’t being hurt economically one iota while state governors continue to rob Americans of the option of deciding how best to remain open during an outbreak that seems to have panicked everyone on the planet except the Swiss.

Small business owners deserve a state lifeline if anything, not a federal one. Donald Trump didn’t order businesses closed; governors and mayors did.

What business owners need is for these state and local leaders to take their jackboots off their necks and let them reopen with caution, instead of being NYC Mayor Bill de Blasio and enticing citizens to rat each other out like they did in Nazi Germany and still do in Communist China.

America was never built to have a part-time economy, be a part-time superpower, or be afraid. Yet, the Pelosis of our country want us to be all three. And she’s willing to help destroy the lives of millions to get her way.

Never forget that, especially at the ballot box in November.