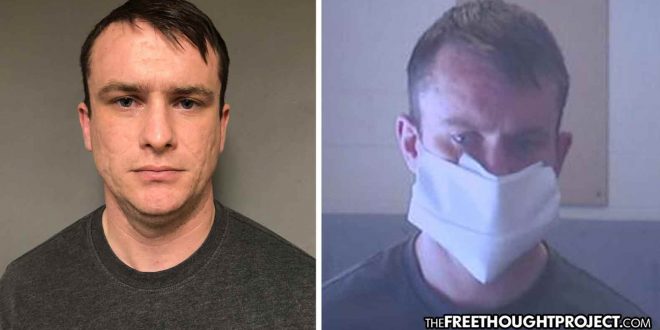 St. Albans, VT — The term blue privilege came about in this country after people began paying attention to the crimes committed by police officers and the subsequent lack of accountability they face when committing them. Over the years, TFTP has reported on countless cases of murdering, raping, child molesting, and rights violating cops escaping accountability for their actions with little to no jail time. In some instances, they aren’t even fired for murdering unarmed innocent fathers, crawling on their knees, begging for their lives.

Continuing in the trend, in a case out of Vermont this week, a St. Albans police officer just received a hefty dose of blue privilege over his alleged crimes. He was arrested for allegedly breaking into a woman’s home, beating her up, throwing her down a flight of stairs, and burning her repeatedly with a cigar. For good measure, he took his father along with him — who was also arrested for his role in the incident.

According to the victim, as reported by the St. Albans Messenger, she says two men she identified as Zachary and his father Allen Pigeon entered her home the first weekend in April, dragged her from the couch where she was sleeping, threw her down some stairs and off her porch, then pulled her back up it and again threw her down again, this time off a section of porch with no stairs, before burning her back with a cigar.

Despite these grim allegations, after Officer Zachary Pigeon, 29, and his father Allen Pigeon, 56, each pleaded not guilty Monday to five charges: simple assault, kidnapping, obstructing justice, burglary, and unlawful restraint and they were released without bail and walked out of the courtroom.

As the VT Digger reports,

The kidnapping charge carries the possibility of life behind bars, with the additional charges collectively adding the potential of another 26 years imprisonment.

State police had said Sunday that Zachary Pigeon would also face an aggravated sexual assault charge, but that was not included in the counts filed against him in court Monday.

At an arraignment at the Chittenden County criminal court, Judge Gregory Rainville ordered both Zachary Pigeon and his father Allen Pigeon be released on conditions — citing the coronavirus.

According to the judge, holding the two men accused of torturing an innocent woman to keep her quiet, was not “absolutely necessary” due to the COVID-19 outbreak.

VT Digger reports Rainville said it was a “very close case,” particularly for Zachary Pigeon, noting that he had no criminal record, but that the alleged crime was a “very heinous act” that carried the possibility of a life sentence.

“However, given the Covid-19 emergency, we’re trying not to introduce any new inmates unless absolutely necessary,” Rainville said.

State’s Attorney Diane Wheeler disagreed with the judge and pushed for both men to be held without bail. She did not get her way. Now, two men accused of attempting to cover up a case of long-term sexual abuse, by torturing a woman, are at their home, released on condition.

According to WCAX, the victim told investigators she was repeatedly sexually assaulted by Zachary Pigeon between 2003 and 2007. Police say when she recently threatened to reveal the alleged attacks, Pigeon and his father kidnapped and assaulted her.

The woman told police that Pigeon had repeatedly sexually assaulted her over the course of several years when she was only a child. Zachary was a teenager at the time of the alleged assaults.

The victim “told police the assaults began when she was in the fourth grade and continued until the eighth grade, when she moved and was no longer living where Zachary could assault her. She said he threatened to assault her younger sister if she resisted him, and that he would hold a box cutter to her throat, nipples or another vulnerable part of her body to degrade her if she tried to refuse.”

When interviewed in the investigation, both Pigeons denied the allegations and told investigators that the victim was unreliable.

The cop’s privilege was even extended by his own department who issued nothing but praise for him after the arrest.

“There is nothing, nothing whatsoever in his file that would show up as a red flag or an indicator of any of the things that I have now heard that he is alleged to have done,” St. Albans Police Chief Gary Taylor said. “We went all through it. He polygraphed twice– and there is nothing.”

Hopefully, the alleged victim doesn’t end up dead before these two men go to trial.

Matt Agorist is an honorably discharged veteran of the USMC and former intelligence operator directly tasked by the NSA. This prior experience gives him unique insight into the world of government corruption and the American police state. Agorist has been an independent journalist for over a decade and has been featured on mainstream networks around the world. Agorist is also the Editor at Large at the Free Thought Project. Follow @MattAgorist on Twitter, Steemit, and now on Minds.
@@MattAgorist
Share
Tweet
Share
Pin