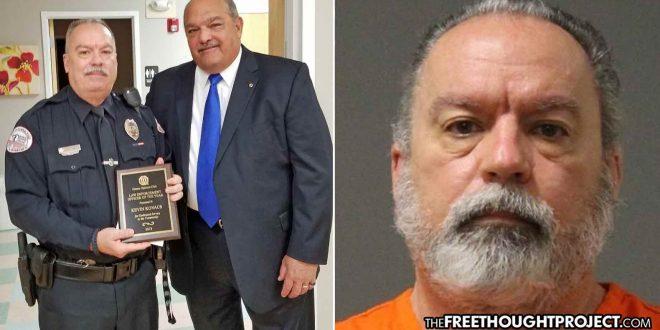 Beavercreek, OH — The Drug Abuse Resistance Education (D.A.R.E.) program should better be called an hilarious exercise in how not to convince kids to keep away from substances the state deems illegal. As cops hopped on their high horses and had children pledge not to do drugs, the rate of drug use skyrocketed — thrusting the country into one of the worst drug epidemics in human history. The hypocrisy by the cops who pushed the D.A.R.E. program has been well-documented over the years, explaining, at least in part, as to why the program was such a failure from the start. Now, another cop who pushed kids to ‘just say no’ has been arrested and accused of disturbing criminal activity.

Parents whose children participated in the D.A.R.E. program in Beavercreek, Colorado now need to question their children who may have had contact with former Beavercreek police officer Kevin A. Kovacs. On Thursday, Kovacs, 58, was arrested at his home for unspeakable crimes against children.

“Kevin A. Kovacs, a former longtime Beavercreek police officer, was arrested this morning on federal charges of producing, distributing, receiving, transporting and possessing child pornography,” said U.S. Attorney David M. DeVillers. “Additionally, Kovacs is charged with tampering with a witness or informant, according to the statement from the US Attorney’s office in the Southern District of Ohio.  Kovacs appeared in federal court at 1:30pm Thursday and was scheduled to appear again at 1:30pm Friday for a detention hearing. This investigation remains ongoing.”

Officer Kovacs has served the community of Beavercreek for 25 years.  Currently, in his sixth year as the D.A.R.E. officer for Beavercreek schools, Officer Kovacs teaches 5th grade students decision-making skills to help them lead safe and healthy lives,  empowering them to respect others and choose to lead lives free from violence, substance abuse, and other dangerous behaviors.  As the crime prevention specialist, Officer Kovacs provides information to citizens and businesses on safety and security issues and assists in developing crime prevention initiatives in the community.  Officer Kovacs’ commitment and dedication to working in partnership with our community and helping to educate the youth of Beavercreek inspires respect for law enforcement and fosters the well-being of the community.

Kovacs retired in August 2018 after 25 years with the Beavercreek Police Department. He worked as a patrol officer, crime prevention specialist and DARE officer with Beavercreek City Schools, according to a Beavercreek police Facebook post announcing his retirement.

Also, it appears that the officer had been under investigation for some time prior to last week’s arrest.

According to News Center 7, they were at Kovacs’ Fairborn home in December, when Fairborn police were assisting with a search warrant. At the time, police declined to comment on the nature of their investigation.

“The conduct he is alleged to have committed is both disgusting and extremely disappointing,” said Beavercreek Police Chief Dennis Evers. “As a former D.A.R.E. officer who received departmental and community awards for his work, he, of all people, knew this criminal activity to be exploitation of children and unlawful.”

The school system — who put this man in front of countless potential victims, expressed their shock after Kovacs’ arrest.

“Beavercreek City Schools administration was alarmed after learning of the allegations against Ofc. Kovacs,” said Beavercreek Superintendent Paul Otten. “School staff and parents have been notified about this alleged incident and are encouraged to reach out to local law enforcement if they have specific concerns or information related to this case.”

According to WHIO, Evers also added that this type of activity is part of a larger problem in today’s society and he’s encouraging legislatures to look at passing more stringent laws that would make it more difficult to access this kind of material on the internet. He also is calling for the increasing of penalties who chose to knowingly access and download the material.

Indeed, it is a growing problem in today’s society — and top cops continue to be the ones getting busted for it. Just this week, TFTP reported on a police chief in Stow, Massachusetts who was pulled from his job as the city’s top cop after video by a self-declared pedophile hunter was posted online. The video allegedly shows the cop attempt to meet a boy — who the chief knew was only 14 — for sex. Instead of meeting the boy, however, the chief was confronted by  Predator Poachers Massachusetts.