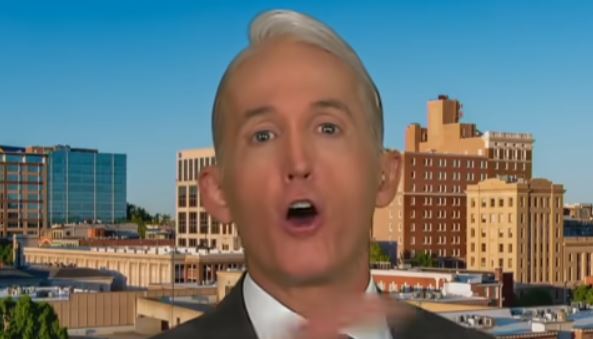 By now, most reasonable Americans not only believe that the Obama administration spied on a rival presidential campaign during the 2016 cycle, they know that there were more than just a few people inside President Obama’s Justice Department, FBI, and U.S. Intelligence Community who were so corrupted by his politics they worked with the former president to subvert our democratic processes.

Former U.S. Rep. Trey Gowdy (R-S.C.) worked diligently to expose this corruption during his tenure in office, but it’s what he’s been able to reveal since leaving Congress that continues to add to the body of evidence that the Obama regime was not only the most corrupt in American history but that people who allied with him on “Spygate” still need to be held legally liable for their treachery.

On Sunday during an appearance on Fox Business Network‘s “Sunday Morning Futures” with Maria Bartiromo, Gowdy revealed another piece of the puzzle that proves yet again why POTUS Donald Trump’s ongoing effort to ‘drain the Washington swamp’ deserves another four-year — because he’ll need it.

Gowdy told Bartiromo that corrupt FBI officials used two standards when providing intelligence and law enforcement briefs to then-GOP nominee Trump and then-Democratic nominee Hillary Clinton, the latter of whom was exonerated by the same corrupt bureau despite multiple obvious infractions of the Espionage Act.

The two were discussing Attorney General William Barr’s ongoing investigation into the origins of the “Russiagate/Spygate” probe; apparently, the AG is shifting his attention into finding out how the U.S. Intelligence Community determined that Moscow was intervening in the 2016 election to help Trump.

Asked if Barr was on the right track, Gowdy, a former federal prosecutor, noted that is “is entirely appropriate” for him to determine that in order to answer the larger question about the origins of the probe.

“I think some people will tell you Russia wanted her [Clinton] to lose, and then, in a binary choice, by default, that means he must win,” Gowdy said.

“The intelligence community’s always skittish when people look at their work product,” he continued, because they don’t deal with evidence or criminal proceedings, they make “assessments.”

However, Gowdy noted further, the intelligence community has been famously wrong in the past, which means they, like other government entities, “are not above oversight and review” by Congress or other government agencies.

“If Barr wants to look at the evidentiary foundations of this investigation, he should,” the former GOP lawmaker said.

But Gowdy countered that the intelligence community appeared to be providing alleged criminal information to the FBI and Justice Department during the 2016 election, which means Morrell and other deep state officials can’t now complain when the current DoJ is looking into the origins of that intelligence.

“Meanwhile, some Democrats are calling for Donald Trump to be in prison” based on the intelligence community’s alleged information regarding Spygate, Gowdy said. “So, you can’t have it both ways.”

Then Gowdy dropped some bombshells.

“Have you ever seen the FBI’s internal analysis of whether [Trump dossier author] Christopher Steele was reliable,” he asked. “Have you seen the paperwork where he was defrocked as a source because he couldn’t follow FBI rules and regulations?

“Have you seen the exculpatory evidence as it relates to George Papadopoulos?” Gowdy continued, a reference to one of the Trump campaign’s low-ranking foreign policy analysts who the FBI once claimed was the source of the Spygate probe.

“Here’s one, Maria, have you seen the disparate defensive briefings they gave candidate Clinton versus Candidate Trump? And has anyone asked the FBI to explain why they took entirely different tracks to those two debriefings? There’s a lot left to be seen by you and your viewers.”

I Love My Freedom adds:

It is important to note that the FBI swore on Oct. 21, 2016, to the FISA judges that Steele’s “reporting has been corroborated and used in criminal proceedings” and the FBI has determined him to be “reliable” and was “unaware of any derogatory information pertaining” to their informant, who simultaneously worked for Fusion GPS, the firm paid by the Democratic National Committee (DNC) and the Clinton campaign to find Russian dirt on Trump.

Just-unearthed memos also show that a ranking government official who met with Steele in October 2016 made the determination that at least some of the ‘dirt’ on Candidate Trump that Steele was digging up simultaneously for the FBI and for the Clinton campaign wasn’t close to accurate, but was nevertheless most likely leaked (by him) to the media.

Those concerns were contained in a typed memo and handwritten notes taken by Deputy Assistant Secretary of State Kathleen Kavalec on Oct. 11, 2016.

Recall, as we reported, that Steele shopped his bogus dossier to John Kerry’s State Department in the weeks before the election, with the objective of having it leaked. What’s more, we know that House Majority Leader Steny Hoyer (D-Md.) was working with Obama’s State Department on documents provided by bogus “dossier” author Christopher Steele.

As for Kavalec, she wrote that Steele told her the Russians had constructed a “technical/human operation run out of Moscow targeting the election” that recruited emigres in the United States to “do hacking and recruiting.”

She quoted Steele as saying, “Payments to those recruited are made out of the Russian Consulate in Miami,” according to a copy of her summary memo obtained under open records litigation by the conservative watchdog organization Citizens United.

Kavalec bluntly debunked that assertion in a bracketed comment: “It is important to note that there is no Russian consulate in Miami.”

Two days later and well before the FBI obtained the first FISA warrant to spy on Carter Page of Team Trump, Kavalec forwarded her assessment to other government officials.

Not only did it not affect the outcome, as Spygate continued apace, but as Gowdy noted, the FBI and intelligence community were providing the two campaigns with completely different assessments — meaning Clinton was getting the real deal and they were feeding the Trump campaign a lot of BS.

“This once again shows officials at the FBI and (Department of Justice) DOJ were well aware the dossier was a lie — from very early on in the process all the way to when they made the conscious decision to include it in a FISA application,” Rep. Mark Meadows (R-N.C.) told The Hill‘s John Solomon.

“The fact that Christopher Steele and his partisan research document were treated in any way seriously by our Intelligence Community leaders amounts to malpractice.”