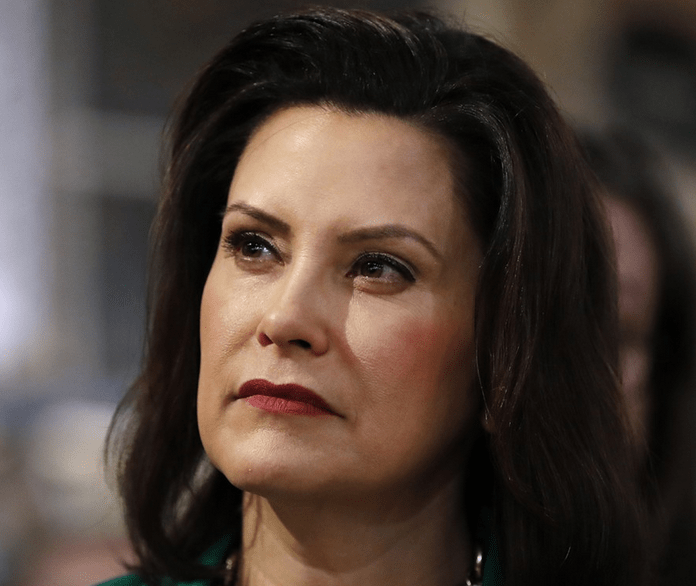 Michigan Governor Strengthens Hold on State, Extends Stay at Home Order to May 15

Once again we see how crises brings out the little Democrat tyrants.

“I’m not going to sign any bill that takes authority away from me,” she gasps.

Protesters gathered outside the home of Michigan Gov. Gretchen Whitmer on Thursday — the same day reports emerged that she plans to extend the state’s coronavirus stay-at-home order by two weeks until May 15.

“We wanted to send Gretchen Whitmer a message, we didn’t want to surrender our liberties just for a little temporary safety,” Brian Pannebecker, who helped organize the protest, told the station.

Gov. Whitmer to extend stay at home order until May 15https://t.co/fgk0GVyldT

Meanwhile, the Michigan Legislature has scheduled a special session for Friday with the goal of creating an oversight committee to review Whitmer’s coronavirus orders and possibly strip her of some of her powers, the Detroit Free Press reported.

Critics have accused Whitmer, a 48-year-old first-term Democratic governor, of overstepping her authority with a series of measures intended to stem the spread of coronavirus in the state. April 9 revisions to her initial stay-at-home order included bans on visiting friends and relatives or traveling to vacation homes, and halts on sales of items such as furniture and gardening supplies.

In a podcast interview, she also said abortions should continue in the state during the virus outbreak because the procedures were part of “life-sustaining” health care for women.

“The House & Senate will convene tomorrow to create a special oversight committee on COVID-19 to examine our government’s response,” he wrote. “Michigan needs to handle this pandemic seriously yet properly. It’s what the people deserve, and we will see that it happens.”

The House & Senate will convene tomorrow to create a special oversight committee on COVID-19 to examine our government’s response. Michigan needs to handle this pandemic seriously yet properly. It’s what the people deserve, and we will see that it happens. #InThisTogether

In another tweet, Chatfield noted that marijuana, lottery tickets and alcohol had been declared “essential,” while lawn care, construction and fishing in a motorized boat had been declared nonessential amid the outbreak.

On Monday, Whitmer said she would take a 10 percent cut to her $159,300 annual salary and her staffers would take cuts of 5 percent as the state grapples with the financial fallout of the coronavirus shutdowns. She also continued defending the orders she has issued.

“I know it’s not easy, but the price of losing loved ones is what’s at stake,” she said, noting that many people who contract the virus show no symptoms but can still spread it.

The theme of Thursday’s protest in Lansing, the state’s capital city, was that many Michiganders who are able to work should be able to do so, Pannebecker said.

“Younger people, healthy people, without putting anybody else in danger, including ourselves, and others in danger, should be able to go back to work,” Pannebecker told FOX 2.

The demonstration came eight days after a larger gathering outside the Statehouse called “Operation Gridlock.”

As of late Thursday, Michigan had more than 35,200 confirmed cases of the virus and nearly 3,000 deaths, the Detroit News reported.