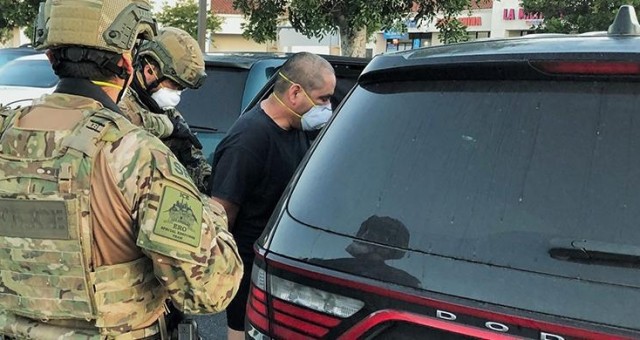 Aggravated felon Julio Garcia-Castellano, also known as Victor Garcia Ignacio, 33, is an unlawfully present Guatemalan national and was convicted of second-degree rape by the Circuit Court of the State of Oregon for Lane County, Feb. 1, 2010.

Garcia-Castellano has two previous removals in 2007 and 2016. He illegally reentered the United States at an unknown place and time. He was arrested by California Highway Patrol for driving under the influence in December. Those charges are pending.

ERO officers obtained a federal warrant of arrest for Garcia-Castellano in Los Angeles for illegal reentry of a previously removed felon. After completion of ICE processing, Garcia-Castellano was turned over to the custody of the U.S. Marshals Service (USMS) where he remains pending federal felony prosecution.

“This case is an incredible example of our ongoing commitment to prioritize enforcement and removal efforts against any unlawfully present criminal aliens who pose the greatest threat to public safety,” said ICE Los Angeles Field Office Director Dave Marin. “Despite attempts by some to mislead, ICE does not conduct random or indiscriminate raids or sweeps and does not operate roadblocks or checkpoints. Our targeted immigration enforcement efforts ensure safer communities for our fellow citizens by removing dangerous criminals from our streets.”

ICE removed or returned 267,000 aliens in fiscal year 2019. ERO arrested 143,000 aliens, more than 86 percent of whom had criminal convictions or pending criminal charges.

ICE is focused on removing public safety threats, such as convicted criminal aliens and gang members; as well as individuals who have violated our nation’s immigration laws, such as those who illegally reenter the country after a prior removal, and immigration fugitives ordered removed by federal immigration judges.

All of us here at Right Wing Tribune want to thank the brave men and women who have dedicated their lives to protect The United States of America!