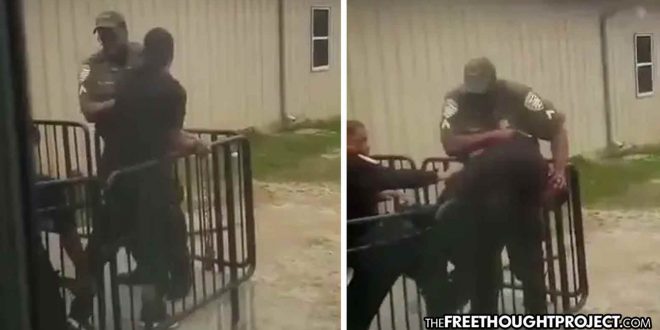 Baton Rouge, LA — COVID-19 has changed the face of American law enforcement as we know it. Never before have we see so many arrests for completely legal activities which have since been banned in the wake of the pandemic.

What’s more, as prisons and jails seek to stave off infections behind bars, many of them began releasing inmates locked up for low-level, and often victimless crimes, though some were dangerous child rapists.

Those left behind bars were locked down and became sitting ducks as the COVID-19 virus swept through prisons across the country. One inmate at the East Baton Rouge Work Release facility thought he may have had the virus earlier this month and sought treatment for his COVID-19-like symptoms.

According to an attorney handling his case, however, deputies with the East Baton Rouge Sheriff’s Office did not take him seriously and he was given honey, ginger, and lemon, and told him to make tea to treat his ailments. Bradford Skinner, the 39-year-old father of three was then sent back to his cell.

The next day, Skinner again told staff that he might have the novel coronavirus. This time, instead of issuing him home remedies, Skinner was issued threats by the warden saying that if he “kept it up” he’d “show [Skinner] what he’d do to him” and threatened to write him up for inciting a riot, according to his attorney.

Later that day, it appeared that the warden made true on his alleged promises. According to a video shot by someone inside the prison, Skinner was handcuffed and then choked unconscious by an East Baton Rouge Sheriff’s Deputy.

As the Appeal reports:

The Appeal obtained footage of the April 4 incident. In the video, three law enforcement officers—one sheriff’s deputy and two guards—wrench Skinner’s body over a black metal railing as other prisoners stand and watch. The sheriff’s deputy wraps his hand around the back of Skinner’s throat as the three men fold Skinner’s torso over the railing, appearing to cut off his air supply. After about 20 seconds, Skinner’s body goes limp. Skinner then crumples to the ground, seemingly unconscious, after the officers release him.

“That man in handcuffs, they doing that to that man,” a person is heard saying.

“That man can’t breathe! Look!” another man said as he watched the officer choke out Skinner.

After the video was released, Warden Dennis Grimes was forced to respond and claimed that the video only showed a portion of the interaction and claimed Skinner isn’t the model inmate he is making himself out to be.

“The incident that you have a partial video of is related to a call our prison received from the Louisiana Work Release facility asking for assistance,” Grimes wrote. “According to their staff, the inmate in question had attempted to escape by jumping from a moving van and attempted to assault a guard before trying to escape again and incite a riot. The inmate continued to refuse compliance and then would not move for transportation. He was taken to our facility and checked out by medical and cleared for booking into the prison where he currently remains in good health. Louisiana Workforce staff stated that he will additionally be charged with Escape, Assault and Inciting a Riot.”

Skinner denies these allegations and claims the jail made the charges up to cover their brutality. What’s more, you actually have to be a model inmate to enter into the Work Release Facility.

“I am being punished for being sick,” he said through his attorney. “If this wasn’t on camera, it would have been swept under the rug and fell on deaf ears.”

Indeed, as TFTP has reported at length over the years, prisons from coast the coast have allowed inmates to suffer horrific fates like giving birth in a cell, ignoring their cries for help until they die, or simply beating them to death. Almost every single time it happens, the prison engages in a cover up.

What’s more, the actions recorded on video — a cop choking a handcuffed man until he falls unconscious — is a civil rights violation.

“It is unconstitutional to choke someone by the throat to the point of unconsciousness when they are handcuffed and exhibiting only passive resistance,” William Most, Skinner’s attorney, told The Appeal. We agree.

Courtesy of TFTP
Matt Agorist is an honorably discharged veteran of the USMC and former intelligence operator directly tasked by the NSA. This prior experience gives him unique insight into the world of government corruption and the American police state. Agorist has been an independent journalist for over a decade and has been featured on mainstream networks around the world. Agorist is also the Editor at Large at the Free Thought Project. Follow @MattAgorist on Twitter, Steemit, and now on Minds.
Share
Tweet
Share
Pin