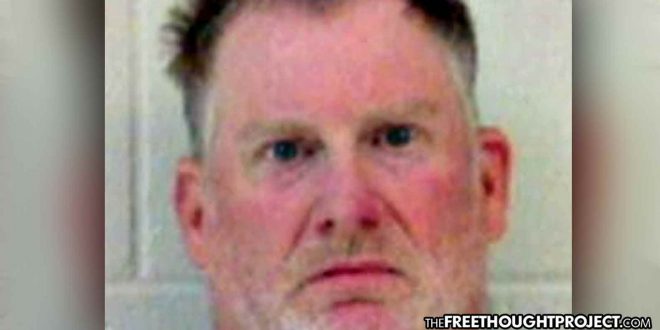 Urbana, IL — In December, University of Illinois police officer Jerald “Jerry” Sandage, was arrested and charged with official misconduct for allegedly using police resources to look up personal information on women, while both on and off duty. He was let out shortly after and now finds himself back in the same Piatt County jail after being arrested again — this time for the rape of multiple women, who were all unconscious at the time of their rapes.

Sandage is accused of disgusting acts of rape on unwilling and unconscious victims. Illustrating the extremely depraved nature of his acts is the fact that the victims never knew they had been raped until seeing the photos of it. One of the victims found out from Sandage himself after he showed her the photos and videos of him raping her and then blackmailed her for more sex by threatening to expose an extramarital affair.

Because Sandage was a cop, he has managed to escape accountability for his actions for years. In fact, some of the charges Sandage is currently facing stem from a 2018 investigation that originated when one of the victims went to Illinois State Police with her claims of rape.

However, according to the News-Gazette, the office of the state appellate prosecutor, appointed at the time because Sandage was still a UI police officer, declined to file criminal charges in that case.

They are likely regretting that decision as it allowed Sandage to victimize at least one victim, but potentially countless others.

Not until 2019 did his own department find that he was using police resources to look up personal information on his victims to stalk them. Once this was uncovered, State’s Attorney Julia Rietz filed seven counts of official misconduct against Sandage in December.

After his arrest on multiple counts of misconduct, the allegations that were once thrown out due to his blue privilege, received a second look. Other victims were then interviewed and Sandage’s phone was searched. What they found was an incredibly disturbing profile of a serial rapist with countless victims going back years.

“They found hundreds of thousands of images and pieces of data going back years,” Rietz said. “There are still potential victims out there that have not been identified yet.”

In the midst of the investigation, Sandage resigned in February after being a UI officer for 12 years.

In court filings, Rietz described the allegations in each case of the four women who are known:

— On June 29, 2012, Sandage is accused of committing criminal sexual assault with a woman who was unable to consent. He and the woman were friends and were at a bar together. The victim was intoxicated and went to his home and fell asleep.

Photos found on his phone show Sandage allegedly committing a sex act with the woman, who was unaware it happened until she was shown the photos.

— On March 19, 2016, Sandage is accused of committing criminal sexual abuse with a female friend. Photos on his phone show her apparently unconscious and in states of undress as he allegedly committed a sex act with her. The woman didn’t know it had happened until seeing the pictures.

— On Sept. 22, 2018, Sandage is accused of committing criminal sexual assault on a woman he had met at a bar and invited to another bar to see a band. She went to his apartment with him, had a drink and passed out. She said she awoke to find him on top of her committing a sex act. A search of his phone showed that three weeks earlier, he had looked up information on date-rape drugs. (This was the case where the state appellate prosecutor declined to file charges.)

— Between November 2017 and November 2019, Sandage is accused of committing criminal sexual assault and intimidation with a woman he knew. He allegedly had sex with her when she couldn’t consent and threatened that unless she continued to have sex with him, he would reveal to her husband information about another relationship she was having with a married man.

Sandage is currently being held on a $3 million bond. If convicted on all counts, Sandage faces the possibility of spending the rest of his life in prison. Let’s hope for his alleged victims, that he doesn’t get off with a slap on the wrist, like so many other serial rapist cops.