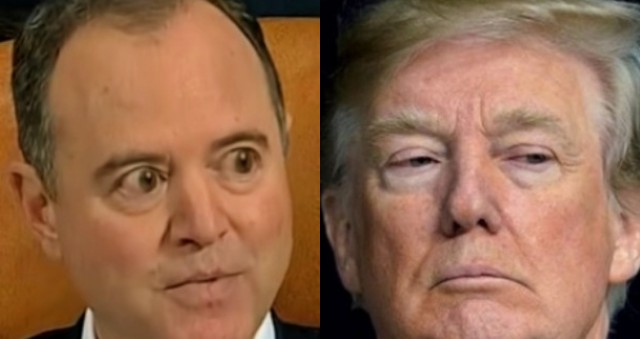 By RUSTY WEISS at MENREC

Representative Adam Schiff (D-CA) made an outlandish claim that many American lives would have been saved from the coronavirus pandemic if only President Trump had been impeached and removed from office. schiff trump impeached

The House Intelligence Committee Chairman told MSNBC’s Chris Hayes that his inability (along with other impeachment managers) to convince the Senate that Trump was guilty and should be removed “haunts” him.

“I don’t think we had any idea how much damage he would go on to do in the months ahead,” Schiff claimed. “There are 50,000 Americans now who are dead, in significant part because of his incompetence, because of his inability to think beyond himself and put the country first.”

“I don’t think we would have ever anticipated that his brand of narcissism and his brand of incompetence would be so fatal to the American people,” he asserted.

Republicans said “How much damage could he really do? … I don’t think we had any idea how much damage he would go on to do … There are 50,000 Americans now who are dead” pic.twitter.com/QGH941MSlk

It Was Schiff’s Impeachment Charade That Cost Lives

There is a whole boatload of stupidity to unpack in those comments, not the least of which is that Schiff seems unaware – perhaps because he was focused on impeaching rather than governing – that the President had already taken significant steps to slow the spread of the virus.

While the resistance party was plotting their impeachment gambit, Trump was setting up a coronavirus task force, ordering more testing and ventilators, restricting travel from countries known to be battling the virus, and declaring a national emergency.

The first reported case of coronavirus in the United States came on January 21st. The impeachment charade ended in the Senate on February 5th.

Is Schiff really under the impression that Trump’s ouster and Vice President Mike Pence’s takeover of the presidency (he is Chair of the coronavirus task force) would have led to different results? Especially when it had already been in the country for two weeks at least, likely longer?

50,000 Americans are dead because leftists were focused on impeachment while the virus was spreading!

Representative Dan Crenshaw (R-TX), has already debunked the claim that more should have been done by President Trump in the month of February.

“You keep calling February this lost month, it’s really not,” Crenshaw told HBO star Bill Maher previously. “It’s just an easy, cheap accusation because there’s no big bold moves taken like there was in January or like there was in March.”

Crenshaw noted that even as of March 3rd, there were still only 100 coronavirus cases in the United States and that Americans weren’t going to accept a lockdown at that point.

Adam Schiff said that 50,000 Americans are dead because the Senate failed to remove Donald Trump

It was HIS impeachment HOAX that kept Congress occupied instead of getting ahead of the virus.

Adam Schiff should resign in shame

RT if you agree!

Anybody with a working set of eyes and ears is aware that it was the impeachment hoax that took Congress’s focus off of the coronavirus.

It was Schiff and his Democrat colleagues who bogged down an entire nation with their little impeachment dreams while the coronavirus was beginning to flourish.

Known liar, clown, fraud, oxygen thief, serial hoaxster, and all-around garbage-person, sleazy Adam Schiff is doing everything he can to make this awful situation worse. There aren’t many people walking this planet who’ve done more damage than this sleazeball.

Buckle up. He’s about to do much further damage.

Schiff vowed two weeks ago to conduct a thorough investigation into the Trump administration’s handling of the coronavirus pandemic.

“We are diving deeply into what does the intelligence community know, what resources we would bring there, and what do we need to do prospectively to better protect the country in the future,” he announced.

While the President will be working diligently to revive America from the economic devastation wrought by this pandemic, Democrats will be working feverishly to slow him down yet again.

Meaning they will have even more blood on their hands when victims of suicide due to the financial crisis, or domestic violence victims due to lockdown, suffer while Democrats play politics.