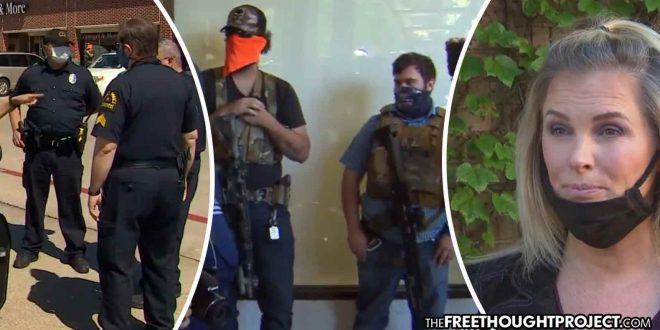 As TFTP reported earlier this week, some folks are beginning to question the closures stemming from COVID-19 and the subsequent impending economic chaos. Business owners who are unable to obtain government backed SBC loans are taking matters into their own hands and they are opening up — despite threats of arrest and fines.

It is important to point out that whether or not you agree with folks reopening against the order, it is happening. It is the inevitable result of people being told to go broke by the state. Many people are willing to risk their health to provide for their families and this is a reality that we live in.

Last week, Shelley Luther made headlines for opening up her salon business, Salon A la Mode in Dallas, Texas. Luther told WBAP that she had applied for federal small business loans, but was denied, and hasn’t received her stimulus check yet either.

“I have received zero income from the government and I applied the first days possible that we were allowed to,” she said as she opened back up for business.

Now, after her case has gone viral, this woman, who some would say is putting her freedom on the line to stand up for what she thinks is right, is stepping it up another notch and essentially daring authorities to arrest her.

As CBS DFW reported on Wednesday:

This week she was served another court order, on top of the $1,000 citation she received last week for refusing to close. But Luther refused to abide by it saying later that nothing short of arrest will shut her salon down.

She is being forced into poverty by these mandates and no one who is doing the forcing is offering her an ounce of help. Instead, they are extorting her.

Last week, Dallas County Judge Clay Jenkins sent a cease and desist letter to Luther for violating local and state executive orders to stay at home and she’s received notice of a hefty $1,000 fine as well. Fast forward to this week, and the judge has doubled down claiming the salon owner is in contempt of court. However, Luther claims the judge is overstepping his bounds.

“All I know is he’s abusing his power… he’s got to be stopped somehow,” said Luther.

Despite threats of arrests, visits from cops, and multiple court orders, she remains undeterred in her stance against the order, she is still open.

She’s responded to the threats of having her license revoked as well.

“It won’t matter if I have a license because I won’t have a business,” Luther told WFAA last week.

As we reported earlier this week, to be clear, it is not like Luther is forcing people to get their hair done at her salon — no one has to go in there — nor is she operating unsafely. Everyone is there voluntarily, everyone wears a mask and they practice social distancing while not having their hair done.

“I don’t want to cause any problems, but when you’re out of money someone has to stand up and say that they’re not helping us by not letting us work,” Luther said.

As CBS DFW reports, she insists her stylists are making much needed money for their families and that the clients coming in are entering a safe, clean environment.

As TFTP reported this week, despite Luther’s optimistic resilience, openly defying government orders to shut down has put a target on her back — one that has the cross-hairs of state officials as well as citizens who want her to remain shut down. This week alone, authorities have received over 50 calls from people essentially snitching on Luther, in spite of her case garnering national attention.

So, supporters for Luther’s act of civil disobedience have shown up to level the playing field — by being well-armed.

Every day since she’s opened, some of the folks who’d gathered to show their support for Luther “were carrying guns while Luther welcomed customers into the salon.” Armed security guards also stand on each side of the entrance, as socially distanced customer lines form outside her salon.

So far, armed protesters, security guards, and Luther’s civil disobedience have been enough to deter any arrests or major police action. However, this week, the armed protesters have gotten the attention of other less gun-friendly establishments nearby and not in a good way.

According to WFAA, an employee at a nearby business — who wasn’t forced to shut down — called police to report the Luther’s armed supporters for practicing their Second Amendment right. The 911 caller also told police the protesters — all of whom are outside in the sun — were not wearing masks.

”I am not comfortable with guns and a guy walking around with an AK-47 is disconcerting,” said Paula, a woman who owns a nearby dog groomer.

Being that Texas is an open carry state, her attempt to disarm individuals because it is disconcerting to her was, fortunately, futile.