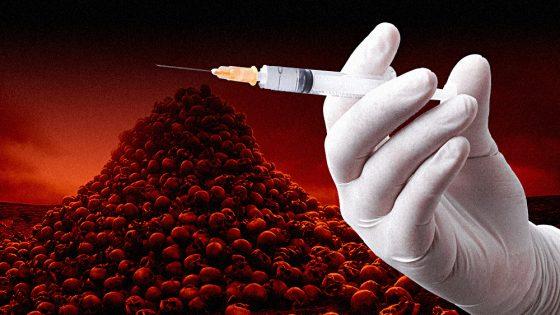 President Donald Trump now has a new goal: Operation Warp Speed.  That’s a partnership with “pharmaceutical companies and the military” in a rush to create a coronavirus vaccine that will be mandatory. He’s stepping into Bill Gates’ shoes.

According to a report by Bloomberg, the Trump administration is organizing a Manhattan Project-style effort to drastically cut the time needed to develop a coronavirus vaccine, with the goal of making enough doses for most Americans by year’s end. Instead of eliminating the police state and tyranny, Trump is doing the opposite.  He’s now sided with Bill Gates and Anthony Fauci making him complicit in the removal of people’s basic human rights.

Next in Coronavirus Tyranny: Forced Vaccinations and ‘Digital Certificates’

It’s time to call a spade a spade, and a tyrant a tyrant.  Brian from the YouTube channel High Impact Flix detailed the problems with vaccine and how quickly Trump pivoted to help the biggest and most corrupt pharmaceutical companies in the world.

“I wanna ask you a question. Are you really against vaccines? Are you against government-subsidized, taxpayer-funded, pharmaceutical benefiting, Bill Gates supported, vaccines? Now let me ask you this question: are you for or against Donald Trump? Are you for or against Barack Obama? Do you suffer from cognitive dissonance? Are you trying to hold two mutually exclusive and diametrically opposed ideas or beliefs in your minds at the same time?”

The mainstream media is now saying this is a good thing, Trump is doing the right thing, and their reporting of it should concern anyone who wants the freedom to decide what goes into their body. At 2:28 in the above video, there is a clip of Trump saying people “have to take the shot” and get the vaccination.

“Wait ’til you see the name of the operation…I thought ‘no way. No. It can’t be this blatant.’ And if this is true, there’s no way people are still gonna be for Trump after this...Called Operation Warp Speed, the project will join pharmaceutical companies and with government agencies and THE MILITARY...they’re all in bed together, guys!

We’ve known this! Now, they’re just putting it in our faces! ‘Look, see? Here’s that thing you can do about it! We’re gonna get the vaccine going! You’re gonna have to have vaccine certifications!’”

“Are you really still for Master Trump? You know people were checked out. You guys who are for Trump now, you call people who were for Obama, the signing of the NDAA and the resigning of the Patriot Act under Obama, you said: ‘oh that’s that’s tyranny! This is a tyrant! He’s acting in a despotic manner!’ You were right. But then Trump comes along and does the same thing…just like Obama did. SILENCE!…Cuz everybody that supports Trump that was against Obama…are nothing but a bunch of hypocrites and that’s why our country and our world is goin’ down.

Because people are not gonna stand fast on, and hold firm to the truth!

What has the world come to?”

This news isn’t going to sit well with some, but we have to be steadfast when it comes to our rights and our freedom.  We need to know what these people who declare themselves our rulers are planning to do to us. Trump is pushing the elitists’ agenda for ID2020. Do you still support Trump after this?