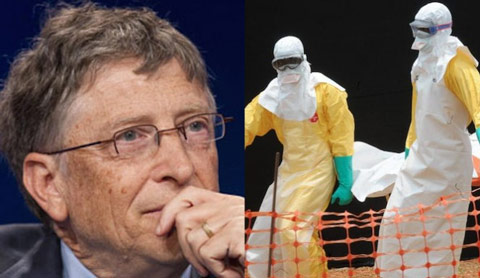 (Natural News) When you give it some thought, it makes sense that one of the world’s wealthiest couples would have a ‘back-up plan’ in case the world went to heck in a hand basket, and it turns out they did.

Bill and Melinda Gates are preppers.

During a recent BBC Radio Live program, Melinda Gates, co-founder of the couple’s foundation, said that she and her hubby stored food in the basement of their home years ago in case the world was struck by a deadly pandemic.

“In terms of your own — again, just to talk about you and Bill for being so familiar with this — had you made any preparations?” host Emma Barrett began. “I was very struck by when I rewatched Bill’s talk from 2015, he rolled that barrel onto the stage and said, ‘When I was growing up, nuclear was kind of the threat, everyone was very worried about bombs and all sorts of threats like that, and we had this barrel in our basement where we’d have to go and eat out of it if we went in.’ Had you done preparation in your own lives?”

“We had done some preparation, yes,” Melinda Gates responded.

“A number of years ago, we talked about, ‘What if there wasn’t clean water? What if there wasn’t enough food? Where might we go? What might we do as a family?’ So, I think we should leave those preparations to ourselves. We had prepared, and had some food in the basement in case needed, and now we’re all in the same situation,” she continued, Breitbart News reported.

Well, not really the same situation; 99.999 percent of the world’s population are not multibillionaires.

And that’s not to begrudge the Gates’ one penny. Whatever vaccine faults he may have, from the outset he began building equipment and technology that filled a need in society, and that’s what capitalism is all about. So, good for him.

But the fact is, the Gates’ most probably a) have a lot of food and other resources in their Xanadu 2.0 home overlooking Lake Washington, in Medina, Wash. The home is 66,000 square feet and in 2009, at least, it was valued at nearly $150 million.

As the pestilence began or started to close in…

Here’s something else: It’s known for the technology it incorporates. The couple broke ground on the home in December 1988, and it was finally opened in 2005, so it’s likely there are all kinds of ‘prepper’ build-ins including bunkers, food storage, electricity generation plants, and, perhaps, even the ability to purify water.

Plus, the couple just purchased a $43 million home on oceanfront property in Del Mar, Calif., so there’s that. (Related: Coronavirus is a dream come true for Bill Gates, who lives to vaccinate.)

The Gates’ probably also have an ‘escape plan,’ so to speak, like many of the world’s uber-rich.

As Bloomberg News reported in September 2018, many of them have snagged property in New Zealand — so much so, in fact, that the country’s parliament was considering limiting land sales to foreigners because there wouldn’t be any left for New Zealanders.

Silicon Valley multimillionaires and multibillionaires were having underground bunkers built in the U.S. and shipped to the tiny Pacific Island country, then buried several feet underground, the plan being the luxury bunkers would serve as redoubts where the rich would ride out pandemics or world war or nuclear holocaust.

As the pestilence began, or started to close in, the uber-rich plan to grab prepared baggage including clothing, supplies and weapons, then take prepared transportation to private planes at local airports, then meet up with similarly wealthy individuals at larger airports with larger jets — then escape.

No doubt that Bill and Melinda Gates have similar plans. And as she indicated in her BBC interview, we already know they are preppers.