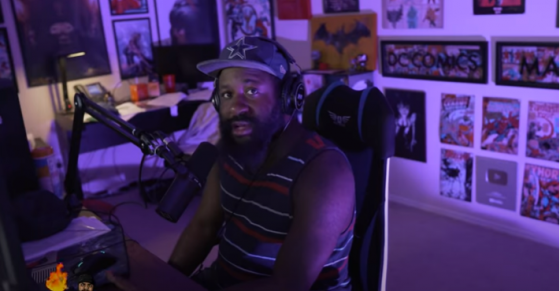 Content creator Eric July, whose YouTube channel is titled YoungRippa59 is the latest victim of Big Tech’s silencing of dissent.  July, who didn’t follow the crowd and questioned the data on the coronavirus pandemic had a video taken down as the ruling class struggles to control the narrative.

This is just one more sign from the globalist cabal and the government that they have become desperate to keep the public in the dark and with as fear as possible.  They don’t censor people because they are wrong, they censor people they fear. July explains:

“I was watching a video not too long ago from..Susan…what is she? The CEO of Google or YouTube or something like that. And I know she was talking about how they weren’t gonna be allowing things on their platform that were going to the contrary of what like, I believe like the WHO and the CDC had advised. And I thought that was always interesting because…what they do, if that’s a policy, is like, basically, we have to accept what they say is truth and they just won’t allow it on their platform if it goes to the contrary.

But I didn’t think it was gonna be of this magnitude and of this nature, in terms of what got removed!”

July’s banned video was a live stream. He says that while YouTube is a company, and they have the right to remove any content they want, he has noticed that there is a heavy-handed attempt to control the narrative. The big story is what these tech giants are doing, not just to July, but others who believe the lies and propaganda from the mainstream media.

Big Tech Ramps Up Censorship: The People FIGHT BACK

The video of July’s that has been removed was of him analyzing the now censored doctors from California who disapproved of the lockdown measures.

“All I did was talk about the video, and they removed my stream talking about the video,” said July. “In all honesty, what I think this does, is it validates. Because it’s not like I said or even they [censored doctors] said anything that was abusive. Did it maybe go against what was deemed a mainstream narrative and the mainstream approach to handling this? Absolutely. That’s the whole point of the video.”

July says this validates a lot of what he’s said. “This has a lot of guys with egg on their face and it seems like people that are in positions of power, such as the Googles and the YouTube of the world, are really trying to control this narrative.”

Be aware that they are actively lying and controlling the narrative to enslave your mind.  This is obvious, but some are still chugging that Koolaid like it’s water.  There is a reason they want you to fear this virus, and it’s to accept their solution which is your complete and total enslavement.

This is one sign, however, that the establishment is getting desperate.  There are just too many people who have seen beyond the facade.  That’s a good thing for freedom, but we still need to help shake awake the rest of the sleeping masses.

Anyone who is advocating a free and voluntary society over a totalitarian tyrannical one is going to be silenced in the near future.  They will attempt to control the narrative and public perception for as long as possible.