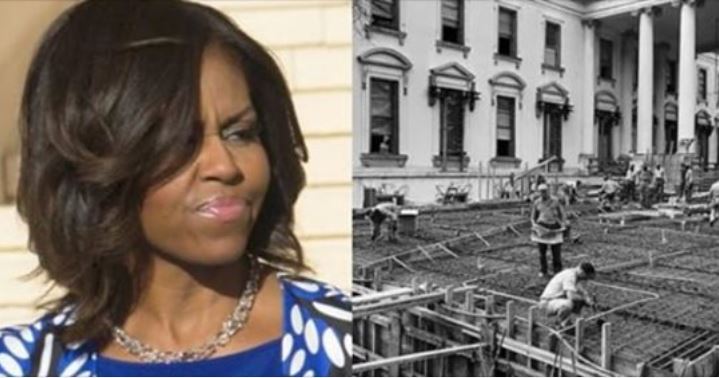 Do you remember when Michelle Obama spoke at the Democrat National Convention and reminded everyone that she wakes up in a house built by slaves?

It’s true that some slaves were hired to help in the construction of the White House, but most of the work was performed by whites and immigrants from European nations. Not to mention, the slaves were paid! My guess would be that these slaves were thrilled about helping build our White House.

But Obama conveniently left these facts out.

So in reality, the Obamas also woke up in a house built by white people, right?

And since these slaves were paid, which by most definitions of slavery wouldn’t make them slaves, then actually she is wrong. Maybe Michelle should brush up on the historical facts before she opens her pie hole.

And, how about THESE important facts!

I’m pretty sure that slavery was abolished long before 1949!

A century-and-a-half of wartime destruction and rebuilding, hurried renovations, additions of new services, technologies, an added Third Floor, and inadequate foundations brought the Executive Residence portion of the White House Complex to near-imminent collapse. In 1948 architectural and engineering investigations deemed it unsafe for occupancy and President Harry S. Truman, his family, and the entire residence staff were relocated across the street. For over three years the White House was gutted, expanded, and rebuilt. The scope, costs, and historical authenticity of the work were controversial, with the reconstruction being called both structurally essential, and a disaster.

On December 13, 1949 construction work began on site. There was no groundbreaking or commencement ceremony. Security fencing went around the work area and a solid screen provided privacy for the West Wing. Temporary sheds and buildings were erected on the South Lawn. By March 20, 1950 the removal of historic material slated for salvage had been removed. New underpinning foundations extending down 20 feet to better bearing material were hand dug under the existing exterior walls. Interior steel shoring was added to brace the exterior walls and support the existing Third Floor and roof. Demolition began with much of the material removed from the interior via chutes through window openings and by wheelbarrow.

By mid-1950 the White House interior was essentially a shell encompassing over a million cubic feet of mostly empty space. By October the new, permanent steel structure was in place and construction of suspended concrete floors to replace the former wood and masonry structure began. For the following year-and-a-half, the new interior walls, doors, windows, wiring, pipes, services, and finishes were constructed.

So, most, if not ALL of the work Obama’s ‘slaves’ did was demolished and replaced!

I bet she doesn’t even know this. She’s a moron that simply wants to fuel the flames of racism.

Look, We do have a history of racism and it’s terrible but it is HISTORY! So get over it and move on. None of you are slaves. NONE OF YOU!

Thank God those scumbags are out of our WHITE HOUSE.