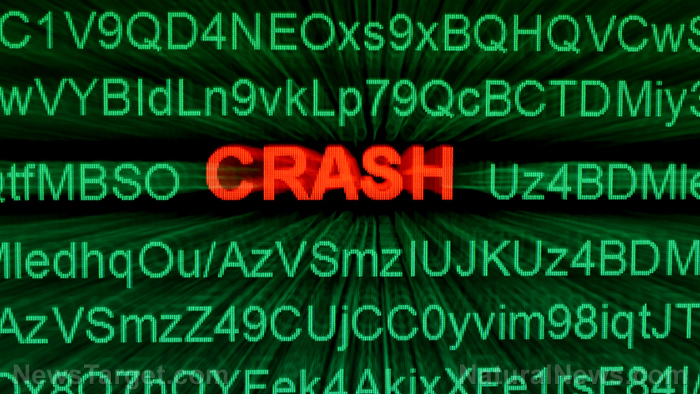 (Natural News) Most people have no clue about the severity and nature of the chaos that’s coming. Just as we are right now living through a “bioweapons Pearl Harbor” attack on the United States with a deadly pathogenic virus, we are all about to live through a global debt collapse and a financial reset that no living person on the planet right now has ever witnessed.

Odds are very high that a global war will escalate into all-out cyber war, financial warfare and possibly even regional nuclear war. Food scarcity will become commonplace, even in the USA, and most people will see their entire life savings — including retirement IOUs — wiped out virtually overnight.

The upshot is that the world we know will be consumed by mass poverty, homelessness, starvation and despair. Very few people will be properly positioned to survive this multi-layered collapse, and most will be destroyed by it because they held the wrong beliefs. They believed in the “full faith and credit” of the United States government, for example, which is a foolish, almost suicidal belief to hold. They believed the falsehood that currency is money, so they incorrectly assumed the dollar would be a store of value rather than a vehicle of coordinated government theft / looting from the working masses. They might have also believed a vaccine would save them from the coronavirus — another foolish belief that will likely end in disaster.

False beliefs can get you killed. They can land you on the street, penniless and broken. That’s why adopting real beliefs while discarding fake beliefs is now vital to your long-term survival. In a previous must-read article, I listed 12 things that are real vs. fake, emphasizing the critical survival skill of being able to tell the difference during an age of confusion and deceit. Read that article before you read this one.

For a taste of the geopolitical insanity that seems imminent, take a look at this interview with Dave Hodges about China’s plan to invade America with military troops:

In working to translate knowledge into action, I’ve put together a list of what I think are the 12 most important, practical things you need to be doing right now to prepare for the coming chaos. I have already done (or am in the process of doing) all 12 of these items, so these isn’t just flippant advice; it’s the lifestyle of those who wish to survive.

These items are not in any particular order. Read the list and get started on what you can right now. Increase your accomplishments over time, as many of these transitions require a tremendous amount of planning and patience. If you spot any items on this list that you’ve already accomplished, pat yourself on the back for being ahead of most.

1. Start growing food in order to move toward food self-reliance. This can include raising backyard chickens. I recently hatched over 40 baby chicks using fertilized eggs from my existing flock. In a few months, they will start to produce eggs. Eggs are like gold in a food supply collapse scenario, and both eggs and egg-laying hens can be bartered for other goods and services. Storing food isn’t enough, by the way: You need to move toward food self-reliance as much as possible. That means growing and producing food in a sustainable way, not just eating stored food.

2. Reduce or eliminate all exposure to banks and fiat currency. Fiat currencies will fail, likely through hyperinflation. Banks will collapse, bonds will vaporize and counter-parties will go belly up. Many equities and “paper assets” will plunge to zero. “Money in the bank” will become as worthless as money in the toilet.

3. Use nutrition to boost immune function and enhance your defenses. Multiple waves of genetically engineered bioweapons are likely headed our way. Only those who have achieved outstanding levels of nutrition and immune function are likely to survive unscathed. Nutrition is the key to activating your immune defenses. Make good nutrition part of your lifestyle from this day forward, as none of us will ever live in a world without the coronavirus from here forward.

4. Leave the city and move to a rural area before chaos comes. The cities will be hardest hit for all the obvious reasons. When the food stamps crater (see #2, above), many cities will collapse into riots and runaway social unrest. Don’t be caught in the cities when this happens, or you will likely only leave the city in a body bag.

Watch this new interview with JR Nyquist to learn how Russia and China may launch a limited nuclear strike on the United States:

5. Store ammunition and become proficient in the three basic types of firearms: Rifle, pistol, shotgun. It’s not enough to “own a gun.” You must achieve proficiency in firearms usage, and you need basic proficiency in the three main types of firearms. I recommend starting on an AR-15, as it’s much easier to shoot and has far less recoil than any pistol, including 9mm pistols, due to the laws of physics (that I don’t have time to get into right here, but trust me, the AR-15 has almost no felt recoil compared to a pistol). Once you gain proficiency in the AR-15, learning to shoot a pistol with good sight alignment will become much easier. For shotguns, start with a 20 gauge to limit the recoil while you learn the basics. Be sure to know how to clear jams, reload magazines and clean all your firearms.

6. Strengthen ties with capable, self-reliant people. Now is the time to strengthen your social networks at the local level. You’ll want to know lots of capable people when it all hits the fan and you’re forced to rely on local connections to barter and survive. Your fake Facebook “friends” don’t count, by the way.

7. Learn how to make your own colloidal silver from silver coins. Coming soon, I’m about to post a subscribers-only video that teaches you how to make colloidal silver using silver coins (high purity coins such as silver eagles from the US Mint). I’ve run the resulting liquid in my lab via ICP-MS and have confirmed the resulting mixture of elements is extremely safe and highly effective. (Not for internal consumption, but for making surface sprays and even a gargle.) Subscribe to the Natural News email newsletter to be sent an invite via email to watch this members-only video. To participate, you’ll need just three 9V batteries, two silver coins, some distilled water and a few other simple things. This video should be released shortly. The reason all this matters is because by storing silver, you are storing wealth and the potential to make powerful medicine at the same time. No other store of wealth also doubles as medicine.

8. Substantially increase your food storage and master food preservation techniques. We are currently recommending a 12-18 month emergency food supply along with ready supplies to grow your own food and become as self-reliant as possible. At the same time, I’ve identified nine sources of wild food that’s available on my ranch at various times of the year. Food security starts in your own back yard, so become proficient and as self-reliant as possible. Make sure you know how to can food, dry food and use salt as a preservative. (And make sure you’ve got a good supply of salt, too.)

9. Prepare for economies to collapse to local barter, and have a product or service that you can offer to others as a means of exchange. Make sure you have a local, low-tech skill that others may find valuable, such as canning food, skinning wild game, low-tech dentistry, furniture construction, security, electronics repair or other similar real-world skills. These can be invaluable during times of barter and economic collapse.

10. Acquire radios and knowledge for radio communications. If you can’t communicate in ways that are independent of the control of Big Tech and corrupt government, you’ll have no chance to survive the chaos. Make sure you have local radios for short-term communication as well as longer range transmit and receive systems such as a HAM radio. You might also consider a pirate FM transmission plan as a backup, but understand that you can be tracked, so stay mobile when you transmit.

11. Start microcaching supplies to protect them from government confiscation. It’s becoming increasingly clear that in certain areas, corrupt government will engage in aggressive confiscation of gold, ammunition, firearms and food supplies once the collapse accelerates. If you store these items in obvious, easy-to-access places inside your home, they will be quickly found and stolen from you by the “anti-hoarding” police. If you hope to survive with your supplies intact, you’ll need to engage in the practice of microcaching, which means hiding your supplies in a distributed array of difficult-to-find locations. The larger your property, the more easily this is accomplished. This topic deserves an entire discussion all by itself.

12. Acquire and store large supplies of commercial-grade sanitizers. In a real collapse, more people tend to die from infections and communicable disease than from kinetic engagements or physical violence. One of the first things that runs out is sanitizers and disinfectants. Sadly, most non-preppers think “sanitizers” means Purell Hand Sanitizer (because they are clueless). The rest of us know that sanitizers can include all the following: Soap, Isopropyl Alcohol (IPA), Povidone Iodine, Hydrogen Peroxide, Sodium Hypochlorite (pool shock / bleach concentrate), commercial virucidal products such as Hydrocide and even Chlorine Dioxide, which is used in water treatment systems. My own lab is developing a sanitizer soon to be released that’s made with colloidal silver and thymol, an extract from thyme. Many essential oils and even d-limonene are also highly effective at cleansing many surfaces. In a collapse scenario, you can never have too many bottles of antiseptics. And don’t forget to stock up on regular soap, too.

Additional sites we publish that may help you prepare:

Survival.news – Articles and breaking news about survival strategies and events.

RISK.news – Brings you news about financial risk, financial collapse and the stock market.

Also, be sure to listen to my Health Ranger Report podcasts on Brighteon.com