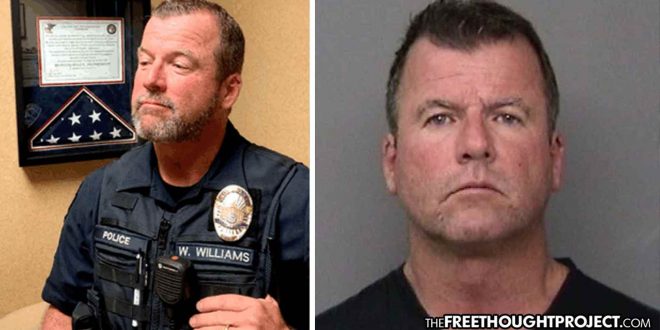 Redding, CA — As TFTP regularly reports, all too often cops are caught hypocritically breaking the laws they are tasked with enforcing. Their role as a law enforcement officer gives them access to inside information, subsequently giving the ability to do things that regular criminals cannot. Much of the time, the corruption goes under the radar and cops get to retire having lived a double life. A cop in Redding, California, however, is no longer living that double life.

Cpl. Will Williams, 53, was one of three people arrested by the California Highway Patrol as part of an investigation into and raid of what authorities are calling a drug warehouse.

The other two were identified as Redding residents Heather Legault, 40, and Michael Gray, 39, according to a CHP press release. According to police, they recovered over 138 pounds of processed marijuana, 332 marijuana plants, 30 grams of cocaine, two firearms and $59,000 in U.S. currency.

CHP Northern Division Chief Elizabeth Barkley explained to reporters that the investigation started when a citizen informed authorities of possible criminal activity inside the warehouse. When police obtained a search warrant for the warehouse, they found the contraband.

Barkley refused to elaborate on Williams’ connection to to the alleged drug ring or how police knew he was involved. When questioned about Williams receiving potential blue privilege, Shasta County District Attorney Stephanie Bridgett said, “When we do receive the case, it will be treated as all other cases, as the law applies equally to everyone.”

According to the Record Searchlight, Redding Police Chief Bill Schueller said Williams has been placed on paid administrative leave pending the outcome of an internal investigation by RPD’s professional standards unit. After the arrest Schueller released the following statement, noting how one of his officers getting arrested for drugs “disturbed” him.

“I am deeply disturbed by the arrest of Corporal Will Williams for the cultivation of marijuana and the possession of marijuana for sale. So much so, that after learning of his arrest, I requested the assistance from our Federal Law Enforcement partners with this investigation. This kind of criminal behavior, especially by a law enforcement officer sworn to uphold the law, cannot, and will not, be tolerated.

As required under the law, Corporal Williams has been placed on paid Administrative Leave, pending the outcome of an internal investigation by my Professional Standards Unit. At the conclusion of this investigation I will determine any discipline, up to, and including, termination. I will be as transparent with that decision, as the law allows.

I understand this kind of behavior can erode the community’s trust and confidence in their police department. I can assure you, we hold our officers to the highest moral, and ethical, standards. This type of criminal behavior, is not a reflection of the rest of our incredibly hard working men and women at the Redding Police Department and the work they perform each and every day.”

It is important to point out that TFTP does not think anyone should go to jail for using or selling marijuana or any drug. The war on drugs has done nothing but increase drug use and violence. It also lends to corruption, like in Williams’ case. Though we feel no one should go to jail for drugs, Williams definitely deserves to be held accountable as he is accused of betraying the trust of those he swore an oath to protect, and this man likely spent his 17 years as a cop, throwing people in cages for the same thing.

Police officers selling drugs is certainly not an isolated incident. In fact, TFTP has even reported on multiple cases in which cops have done so on duty.

TFTP reported on a similar story out of New Jersey, in which a cop tasked with fighting the drug war was actually contributing to the opioid epidemic.

A police officer in New Jersey was arrested by the FBI after he was caught selling drugs out of his patrol car and near the police department, in a sting set up by undercover agents.

Ruben McAusland, 26, reportedly sold roughly $12,000 in drugs to an undercover buyer who was working with the FBI, US Attorney Craig Carpenito said in a statement. McAusland is accused of selling at least 35 grams of marijuana, 48 grams of heroin, 31 grams of cocaine and 31 grams of crack between October 2017 and April 2018.

In another case out of Indiana, TFTP reported on Officer Donald Jordan who was arrested by the FBI after an investigation of several months revealed that he was selling drugs while on duty. The local police department was tipped off about the issue and surprisingly, the local police chief actually contacted the FBI to have them conduct an investigation. Usually, this is the sort of issue that is swept under the rug by police departments, so this is an extremely rare occurrence.

Jordan was corrupt in many more ways than just selling drugs. In one of the reports against him, it was said that he gave a woman three hydrocodone pills and demanded that she touch his genitals instead of giving him money. When she refused, he reportedly exposed himself and physically forced her hand into his lap.

According to one of the witnesses, Jordan said that he was a “better criminal than he is a cop” and even admitted that he was “corrupt.”

In another case from 2015, Perry Betts, one of the most corrupt narcotics officers in the history of the Philadelphia Police Department, was fired for selling drugs, rehired and then fired again. His rehiring came after he was acquitted in a federal corruption case, in which he was accused of 47 different charges including extortion, robbery, kidnapping, and drug dealing.

Betts was acquitted of all of those charges along with six co-defendants who were also Philadelphia Police Officers implicated in the conspiracy. The officers were not only acquitted on all 47 counts, but they also got their jobs back and were even given a parade.

Meanwhile, people who are caught with these same substances have their lives torn apart, sometimes to the point of disrepair, and the country’s drug abuse problem has only gotten worse.

According to a U.S. government study, released by the National Center for Health Statistics, drug overdoses in the U.S. have increased by 23 percent between the years of 2010 and 2014.

In certain areas of the world, like Portugal, where all drugs have been decriminalized, there are far fewer overdoses than there are in prohibition countries. The Washington Post reported that drug overdoses are extremely rare in Portugal, and they have some of the lowest rates of addiction in the world.