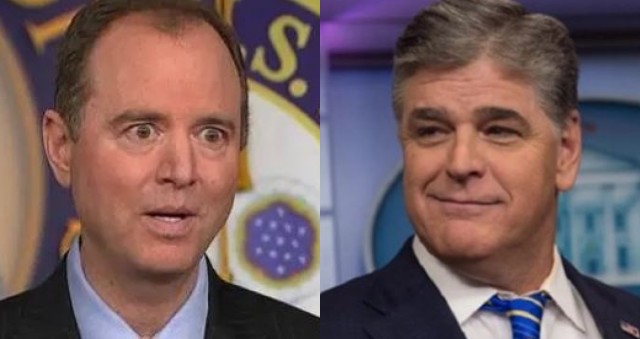 By RUSTY WEISS at MENREC–

Yet they pursued that line of investigation regardless.

The revelation calls into question Schiff’s numerous public and apparently false claims that he had “direct evidence” of collusion.

One senior administration official told Fox that the California Democrat is “in panic mode.”

Transcripts Ready to be Released

Acting Director of National Intelligence Richard Grenell told Schiff that the transcripts from the panel’s Russia probe have been cleared for public release.

“All of the transcripts, with our required redactions, can be released to the public without any concerns of disclosing classified material,” Grenell penned in a letter to the Chairman.

House Republicans have accused Schiff of “blocking” access to the documents.

Grenell warned Schiff that if he is not “willing” to release the transcripts to congressional members and the American public, he would do it himself.

Schiff claimed that he had seen “direct evidence” that the Trump campaign had sought cooperation with the Russians in interfering with the 2016 presidential election.

“I think there is direct evidence in the emails from the Russians through their intermediary offering dirt on Hillary Clinton as part of what is described in writing as the Russian government effort to help elect Donald Trump,” Schiff told CBS.

“They offer that dirt. There is an acceptance of that offer in writing from the president’s son, Don Jr., and there is overt acts and furtherance of that,” he added. “That to me is direct evidence.”

Schiff would also claim – falsely – that he has “more than circumstantial evidence” and implied that there was “compelling and incriminating evidence” of wrongdoing.

Adam Schiff went on every fake news channel to brag he had Direct Evidence on Russian Collusion.. pic.twitter.com/bOHdZne6gd

Hannity opened his show Wednesday night addressing the release of an unredacted August 2017 “scope memo” by the Department of Justice, which showed the full extent of powers given to then-Special Counsel Robert Mueller.

The memo shows broad leeway given to Mueller, even allowing him to investigate General Michael Flynn for what the host called “a bogus, non-existent Logan Act violation.”

He said the “collusion witch hunt” was still allowed to proceed “after they … had all the information that it was false.”

“By the way, Adam Schiff, tick-tock. Not going to be a good day tomorrow, I’m just guessing,” Hannity predicted. “Tomorrow – just hearing, what do I know? I’m just a talk show host – could be the day that the corrupt, compromised, congenital liar Schiff is completely exposed.”

“Then the question of possible crimes he may have committed, that needs to be probed deeply,” he concluded before stating that his sources indicate “there is much more to come.”