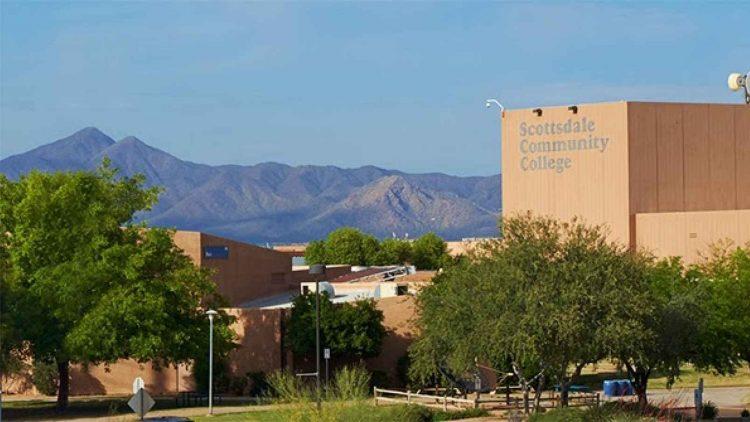 Nicholas Damask, Ph.D., has taught political science at Scottsdale Community College in Arizona for 24 years. But now he is facing a barrage of threats, and his family, including his 9-year-old grandson and 85-year-old parents, is in hiding, while College officials are demanding that he apologize – all for the crime of speaking the truth about the motivating ideology behind the threat of Islamic jihad worldwide.

Damask, who has an MA in International Relations from American University in Washington, DC, and a Ph.D. in Political Science from the University of Cincinnati, says he is “to my knowledge, the only tenured political science faculty currently teaching in Arizona to write a doctoral dissertation on terrorism.” He has taught Scottsdale Community College’s World Politics for each of the 24 years he has worked at the school.

Professor Damask’s troubles began during the current Spring semester, when a student took exception to three quiz questions. The questions were:

Damask explained: “All quiz questions on each of my quizzes, including the ones in question here, are carefully sourced to the reading material. On this quiz, questions were sourced to the Qur’an, the hadiths, and the sira (biography) of Mohammed, and other reputable source material.” And indeed, the three questions reflect basic facts that are readily established by reference to Islamic texts and teachings and numerous statements of terrorists themselves.

Despite this, the student emailed Damask to complain that he was “offended” by these questions, as they were “in distaste of Islam.” Damask recounted: “Until this point, notably, the student had expressed no reservations about the course material and indeed he said he enjoyed the course.”

Damask sent two lengthy emails to the student responding to his complaints, but to no avail. A social media campaign began against Damask on the College’s Instagram account. Damask notes: “An unrelated school post about a school contest was hijacked, with supporters of the student posting angry, threatening, inflammatory and derogatory messages about the quiz, the school, and myself.”

At this point, College officials should have defended Professor Damask and the principle of free inquiry, but that would require a sane academic environment. Scottsdale Community College officials, Damask said, “stepped in to assert on a new Instagram post that the student was correct and that I was wrong – with no due process and actually no complaint even being filed – and that he would receive full credit for all the quiz questions related to Islam and terrorism.”

On May 1, Damask had a conference call with Iudicello and Eric Sells, the College’s Public Relations Marketing Manager. Damask recalls: “I was not offered to write any part of the school’s response, and there was no discussion of academic freedom or whether the College was even supportive of me to teach about Islamic terrorism. The very first point I made with them on the call (and virtually the only input I had) is that I insisted that the College’s release was to have no mention of any actions to be required to be taken by me personally, I was very clear about that.”

Predictably, Iudicello and Sells ignored that. They issued an apology to the student and to the “Islamic community,” and stated on the College’s Instagram page that Damask would be “required” to apologize to the student for the quiz questions, as the questions were “inappropriate” and “inaccurate,” and would be permanently removed from Damask’s exams.

Damask also had three phone calls with Kathleen Iudicello, Scottsdale Community College’s Dean of Instruction, who gave him a bracing introduction into today’s academic funhouse world, where if someone is offended by the truth, it’s the truth that has to be deep-sixed. “During one call with Iudicello,” Damask recounts, “she stated that my quiz questions were ‘Islamophobic,’ that before continuing to have any further class content on Islamic terrorism I would likely need to meet with an Islamic religious leader to go over the content, and that I would likely need to take a class (perhaps at Arizona State) taught by a Muslim before teaching about Islamic terrorism.”

“The irony here,” says Damask, “is that literally during this phone call, I and my wife were tossing socks and jammies and our nine-year-old grandson’s toys into a suitcase to get the hell out of the house because of the death threats made by Islamic commenters on the College’s Instagram page.”

College officials took no public notice of the fact, but the posts on its Instagram page discussing the incident had begun to fill up with threats against Damask, including these statements: “if he is still around I suggest the students take action to make sure he isn’t”; “drop the professor’s address I just wanna talk”; “what’s the instructor’s name and address, I just want to say ‘hi’”; “I wish everything bad on these kuffar” [unbelievers]; “I hope he suffers.”

According to Damask, “there are literally hundreds of posts like this. There have been death threats, at least one call for a school shooting, and at least one call to burn down the school. Again, all of these threats are still on the College’s Instagram page.” When he asked school police to shut down the social media posts in light of these threats, they told him the posts were being monitored. Yet the threats were not taken down.

On Sunday night, the school sent Damask the apology that he was to make to the offended student. It is full of the expected embarrassing groveling: “I know,” Damask is supposed to inform the student, “a simple apology may not be enough to address the harm that I caused but I want to try to make amends.” He promises the student: “I will be reviewing all of my material to ensure there’s no additional insensitivities.” (Apparently, politically correct academics cannot be bothered to internalize basic rules of grammar.)

“It goes without saying,” says Damask, “that I will not apologize for anything, that it is perfectly appropriate to discuss Islam, Muhammad, the Quran, the hadiths and any other matter related to Islamic terrorism. Incidentally: there has been no official complaint, no due process for me, just a mad scramble by the school to appease Islam.”

Damask’s introduction to the new Leftist academic world in which identity trumps truth as been bitter. “The College,” he says, “has displayed an appalling lack of respect toward my rights; it has essentially engaged in defamation by terming my course material inaccurate, insensitive and that I have violated the College’s values; has denied my civil rights through waiving any and all due process procedures; violated my First Amendment rights by demanding I make an apology to the student; and violated my First Amendment and civil rights by demanding I alter my course material. Further and perhaps worse, I believe the school has effectively encouraged and permitted these threats to be made against me when the school could have immediately put a stop to them, which is tantamount to allowing mob threats against me.”

The local media is no better than the school: reports on the incident frame Damask as the villain and make no mention of the accuracy of his material and the threats he has received. The only silver lining in this entire sorry incident is that Scottsdale residents can now know that Scottsdale Community College is not in any sense an institution of higher learning, but it just another Leftist propaganda mill. As awareness of this grows, Scottsdale Community College and other community colleges, full-time colleges and universities like it will lose students and ultimately have to shut their doors. We can only hope.