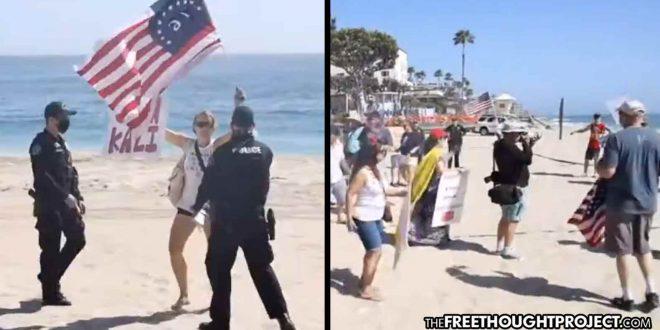 “You let one ant stand up to us, then they all might stand up. Those puny little ants outnumber us a hundred to one. And if they ever figure that out, there goes our way of life! It’s not about food. It’s about keeping those ants in line.” — Hopper, A Bugs Life

California — Over the course of the last month, citizens of California have watched their beaches open and then close as Governor Gavin Newsom flexed his gubernatorial powers at the end of April. After 40,000 people visited Newport Beach and there were crowds at Huntington Beach on the last weekend in April, Newsom said, “We’re going to do a hard close” of the California beaches.

Naturally, people became upset about not being able to go outside to the beach — especially after several studies have found that COVID-19 is obliterated by the sun’s UV rays. Nevertheless, the threat of arrest for walking out into the sand was enough to deter people — for a little while.

A likely tipping point for the citizens wanting to get back out on the beach was the fact that Democratic Congressman Harley Rouda claimed that opening beaches was “reckless” only to be photographed hanging out on the beach last weekend. But it is okay, since he is a Congressman, right?

Rouda’s campaign manager said in a statement that Rouda and his family “were actively moving and adequately socially distancing on a residential beach, which has explicitly outlined beach access requirements in accordance with Governor Newsom’s beach order.”

This week, the people of California decided the hypocrisy was over and decided to go to the beach themselves. A video uploaded to Twitter shows the power people have when it comes to civil disobedience in numbers.

As hundreds of potential beach goers anxiously watched from the sidelines as police threatened arrest, one brave woman disobeyed the order and walked out on the beach. She was quickly approached by two cops who began placing her under arrest for daring to violate Newsom’s orders.

While being arrested, the unidentified woman was put on her knees and her flag confiscated as unrest fomented in the crowd on the sidelines.

When the tipping point was reached, and enough people overcame the fear of arrest, they stormed the beach. Dozens of others joined the woman as she was being arrested and police had no choice but to stand down and let her go.

The woman was allowed to walk away and then the two cops appeared to engage in civil conversation with the other people on the beach. Just like that, rights were asserted, and peaceful resistance had won. It also led to what appears to be a healthy conversation between police and the citizens.

California police were in the process of arresting a woman for going on the beach. When dozens of other people joined her, the outnumbered police let her go and stood down. pic.twitter.com/Eep3eycDZY

While it is heartening to see people assert their rights against police, sadly, this is not the case across the country — especially when lower income or minorities are involved. As TFTP has reported this week, several videos taken in New York City show that cops couldn’t care less about crowds around them as they arrest people over violating social distancing.

This week alone, TFTP reported on two videos of black people getting savagely beaten by NYPD cops for not standing six feet apart. Shameful indeed, especially considering the fact that the cops themselves have to break the order to arrest people for it.

While we feel that social distancing is a good idea as well as avoiding large crowds, the idea that this is being enforced through the barrel of a gun is chilling. In a truly free society, we would never need government to force us into our homes during a pandemic. We would protect the vulnerable and allow others their discretion when making choices.

As a civilized society, we must face the underlying issue, do you need to be threatened with government force to make decisions that keep you and your family safe, or can you make those decisions on your own?