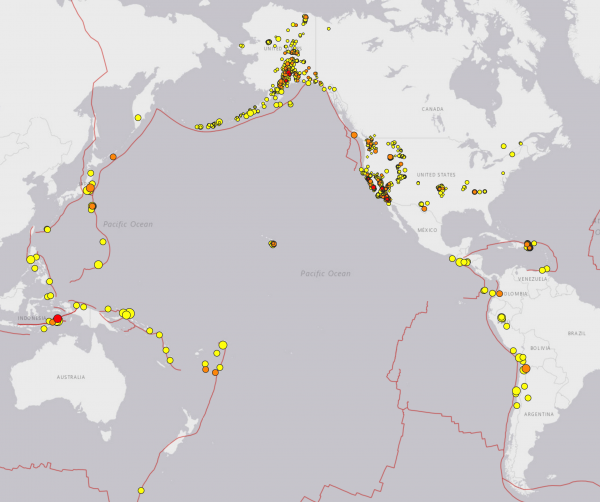 Within the past several days, large earthquakes have been striking all along the outer rim of the Pacific Ocean, and many are wondering if all of this activity could potentially be building up to something really big.  Those that follow my work on a regular basis know that I have been deeply concerned about seismic activity on the west coast for a long time, and scientists assure us that it is just a matter of time before “the Big One” hits us.  According to Wikipedia, approximately 81 percent of all large earthquakes take place along the Ring of Fire, and of course the west coast of North America accounts for a large stretch of it.  As you can see from this map, the California and Alaska coastlines have been absolutely peppered by quakes in recent days, but nobody is really talking about these quakes because everyone is so focused on COVID-19 right now.

You may not have heard about it yet, but a magnitude 4.5 earthquake rocked San Diego on Sunday afternoon…

A 4.5 magnitude earthquake originating in Imperial County rocked San Diegans from East Village to Lakeside on Sunday afternoon, according to the United States Geological Survey.

The quake struck at 3:07 p.m. in Imperial County about 10.5 miles southeast of Ocotillo Wells, according to the USGS. It had a depth of 10 kilometers or 6.2 miles.

That is a rather large quake for that particular area, and it is just one of hundreds that have been hitting the region.  In fact, CalTech says that there have been 1,227 earthquakes in California and Nevada over the last 7 days.

Meanwhile, the section of the Ring of Fire that runs along the west coast of South America has also been getting hit pretty hard.  A magnitude 5.4 quake struck northern Chile on Sunday, and that really shook a lot of people up.

Subsequently, the portion of the Ring of Fire that runs along the coast of Japan was hit by a magnitude 5.8 earthquake very late on Sunday…

And that unusual event in Japan was very quickly followed by a magnitude 5.6 earthquake in Indonesia.

Of course Indonesia sits right along the Ring of Fire as well.

There has been so much shaking in Indonesia recently, but most Americans never hear about it.  Just a few days ago, Indonesia was hit by a magnitude 6.9 earthquake that was so powerful that it was actually felt in Australia…

A powerful earthquake in Indonesia has been felt in the Northern Territory.

Residents of Darwin reported online they had felt the shake, which registered as a magnitude-6.9 quake late on Wednesday evening.

So as you can see, there have been significant seismic events all over the Ring of Fire within the past several days.

But it isn’t just the Ring of Fire that has been shaking.  Big earthquakes have been popping up in diverse places all over the globe, and the magnitude 5.1 quake that just hit Iran really surprised a lot of people…

A 5.1 magnitude earthquake hit Iran shortly after midnight on Thursday night with its epicenter 34 miles east of the capital city Tehran. AFP reported that panicked residents rushed into the streets, abandoning buildings in fear they would collapse. Two people were killed and 55 injured in the earthquake. The earthquake was followed by eight more mild aftershocks.

And weird earthquakes have been happening in the U.S. as well.

Anyone that follows my work on a regular basis knows that in addition to the west coast I am always watching the New Madrid seismic zone very carefully.

So when two unusual earthquakes hit southern Tennessee on Sunday morning, it definitely got my attention…

Two earthquakes were reported back to back in southern Tennessee early Sunday morning, officials say.

Without a doubt, there is a whole lot of shaking going on right now.

That does not necessarily mean that a major event of some sort is imminent, and we should certainly hope that the next major event can be put off for as long as possible.

But as I keep warning, the crust of our planet is very unstable, and many have been warning that we should expect that instability to only get worse in the days ahead.

Seismologists have warned us over and over that it is just a matter of time before “the Big One” absolutely devastates the west coast.  They have told us that the San Andreas fault appears to be “locked and loaded” and that it could potentially “unzip all at once”.

And if that actually happens, seismologists have warned that the ground level could suddenly decline by up to 3 feet, and that could potentially result in vast portions of southern California suddenly being way below sea level.

In other words, we are talking about the sort of disaster that most people don’t even want to think about.

Of course very few people ever imagined that a coronavirus pandemic would virtually shut down the entire country, and yet here we are.

We live in very strange times, and I have a feeling that they will soon get a whole lot stranger…