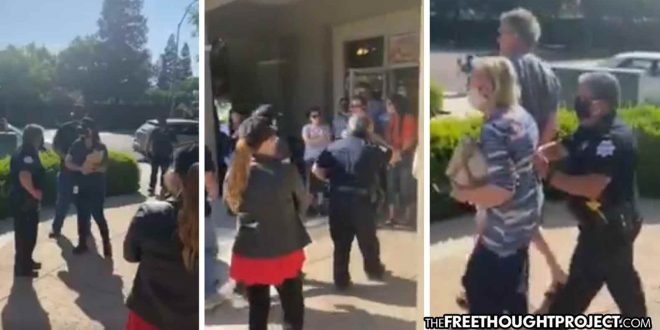 Fresno, CA — With a population over a half million people and less than 900 confirmed cases of COVID-19, the residents of Fresno, California are growing weary of the state’s closure of  “non-essential” businesses. Some businesses have said “to hell with it” and have begun to open up. However, as restaurant patrons learned on Sunday, the badge-wearing order followers are willing to enforce any law they are told, even if it means assaulting innocent people and arresting others.

Mother’s Day is one of the busiest days of the year for restaurants. Knowing this, the owner of the restaurant Chicken and Waffles opened up and was ready to serve. The response to the restaurant’s opening was so overwhelming that people waited outside for over an hour just to get a table inside.

As patrons waited in line Sunday morning, the authorities showed up to keep them in their place. Officers demanded that the crowd outside the restaurant move aside so they could enter. The cops likely didn’t expect the response that happened next.

The restaurant patrons refused to move out of the way and formed a human shield in front of the door. Some restaurant patrons are heard telling the cops to wait in line like everyone else. So the cops did what cops do and escalated force. They started physically shoving people aside. During the melee, the male officer proceeds to grab two random people, an elderly couple, and take them into custody.

The couple is clearly in shock at what’s happening as they have done nothing wrong. Nevertheless, Tom Miller Sr. was handcuffed and led away. This was in spite of the video clearly showing that Miller had no direct contact with the officer at all.

Tom Miller tells me he raised 7 kids, at times without a job, so he knows how much these small businesses are struggling right now.

It's why he was in line at the Waffle Shop today.

Jim Fisher filmed the incident and posted video on Facebook with the caption stating, “Disgraceful on Mother’s Day.”

According to FOX 26, the owner of the restaurant, Ammar Ibrahim, has been knowingly violating the city’s order to close. Last week, immediately after the City of Fresno issued a $1,000 fine for the restaurant being open, Ibrahim said his water slowed to a trickle.

Ibrahim and others believed the City was responsible for that. According to FOX 26, the City of Fresno vehemently denies involvement, saying it is not shutting off anyone’s water for any reason right now while Fresno is under an Emergency Order. However, authorities in California have already promised to shut off the water and electricity to businesses who defy the shutdown order.

As for Miller, he was released by the officers a short time later, what charges he faces, if any, remain unclear.

After the video began to make the rounds on Sunday, the Fresno police department was forced to respond. On Sunday afternoon, Chief Andy Hall sent out the following news release addressing the video. In the release, Hall noted that the officers’ actions appeared to be a violation of department policy.

Today at 0840 hours, the Fresno Police Department was dispatched to the Waffle House at 4025 W. Fig Garden Drive to assist Code Enforcement Officers from the City of Fresno Attorney’s Office with issuing a citation to the business owner for violating a City of Fresno Emergency Order as it relates to the illegal operation of a restaurant during the COVID-19 pandemic. I have been briefed on the incident and have reviewed the video taken by a bystander. I am also in the process of reviewing the officer’s body camera of the incident. As the Chief of Police, I am concerned over the manner in which this incident was handled as it doesn’t appear to be consistent with our Department’s policy concerning demonstrations or the directions I have given officers via a Chief’s memorandum for handling enforcement of the Emergency Order. I immediately ordered an Internal Affairs investigation of the incident. I would ask for the public’s patience in this matter while the investigation is conducted.

Below is what attempting to eat at a restaurant on mother’s day looks like in a police state.

Cops in the News