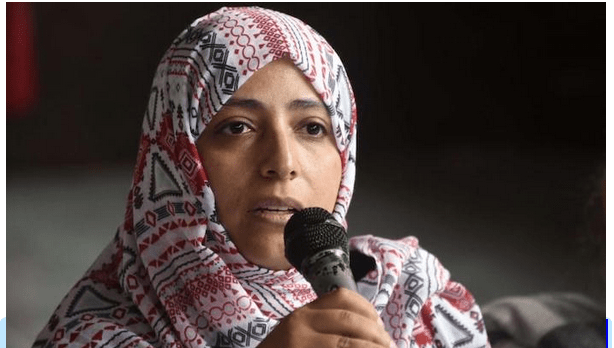 It is easy to see where all this is tending, although no one seems to have the wit or the will to do anything about it.  The social media giants, anxious to make sure that President Trump is not reelected, are moving quickly now to defame and discredit, or silence altogether, all those who dissent from their far-Left agenda.

,” which is now filled entirely with the libels of the Southern Poverty Law Center, the Bridge Initiative, and the like, with nothing favorable at all.

Nor am I the only one this has happened to: I noticed it when I saw Daniel Greenfield writing about the same thing has happened to him, and tried it on my own name.

The far-left’s favored religion, Islam, will be protected on Facebook, even in its jihadist forms, while Tawakkol Karman and her colleagues will make sure that the social media behemoth, through which most people get their news, is entirely divested of all content critical of the religion of peace.

We have been blocked from posting on our Jihad Watch page at Facebook for several months now; this new “oversight board” will mop up any dissenting voices that are still active there.

“Facebook sparks controversy by naming Brotherhood figure to oversight board,” Arab Weekly, May 8, 2020 (thanks to Northern Virginiastan):

LONDON – The name of Muslim Brotherhood-affiliated Yemeni Nobel Prize winner Tawakkol Karman stood out as an odd addition to the list of Facebook’s first 20 oversight board members.

Facebook said it selected the four co-chairs who in turn helped choose the rest of the 16 members.

“The Oversight Board is an external body that members of our community can appeal to on some of the most significant and challenging content decisions we face,” announced Facebook.

The social media company pointed out that it expected the members “to make some decisions that we, at Facebook, will not always agree with — but that’s the point: they are truly autonomous in their exercise of independent judgement.”

Brent Harris, Facebook’s director of public policy, said the company “will implement the board’s decisions unless doing so violates the law.” Over the next few months, the body expects to grow to around 40 total members.

Radicalisation experts believe that by choosing Karman for the influential role, Facebook failed to recognise the link between the Muslim Brotherhood’s ideological advocacy and extremist activity….

When Karman won the 2011 Nobel Peace prize for her “role in Arab spring protests,” the Muslim Brotherhood’s website, Ikhwanweb, released a statement on Twitter identifying her as a “Yemeni Muslim Brotherhood member,” sparking widespread speculation and criticism about her connection to the group.

Despite tactical disagreements about alliances in Yemen’s war, Karman is a leading figure of  Yemen’s Islah Party, a Muslim Brotherhood affiliate.

Karman has repeatedly defended the Muslim Brotherhood, even describing the group as “one of the victims of official tyranny and terrorism in the region, which Trump gives his supports and assistance.” She has said she believes the movement’s role in the region will “necessarily” grow in the future.

Many social media users in the Middle East and North Africa region reacted to Facebook’s selection of Karmancwith [sic] confusion and derision as the Yemeni writer is more known for her Islamist activism and divisive stances than for public service commitment….

The choice of Karman to Facebook’s advisory board will add to suspicions about the social media body’s political leanings and is unlikely to enhance the company’s credibility in the Arab world, experts say.