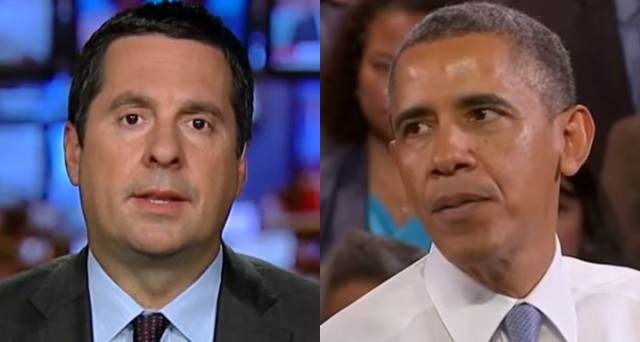 California Rep. and House Intelligence Committee ranking member Devin Nunes told Fox News’ “Sunday Morning Futures” that he is preparing to send eight criminal referrals to the Department of Justice this week related to the Obama administration’s handling of the Trump-Russia investigation.

Nunes criminal referals are about alleged misconduct from “Watergate wannabes” during the Trump-Russia investigation, including the leaks of “highly classified material” and conspiracies to lie to Congress and the Foreign Intelligence Surveillance Act (FISA) court regarding the infamous Steele dossier, Fox News reports.

The dramatic step comes as Republicans have pushed for the release of key documents to uncover the origins of the now-discredited narrative that the Trump campaign colluded improperly with the Russian government, Fox News reports.

President Trump recently told Fox News he would release the entirety of the FISA applications used to surveil one of his top aides, and other related documents.

Nunes said he has been working on the referrals for more than two years, and wanted to wait until the confirmation of Attorney General Bill Barr.

“We’re prepared this week to notify the attorney general that we’re prepared to send those referrals over,” Nunes said. “First of all, all of these are classified or sensitive. … Five of them are what I would call straight up referrals — so just referrals that name someone and name the specific crimes,” Nunes told Maria Bartiromo. “Those crimes are lying to Congress, misleading Congress, leaking classified information. So five of them are those types.”

Chuck Ross at The Daily Caller Foundation (DCNF) reports that Nunes declined to identify the Obama officials who will be subject to the referrals. He said that five of the referrals name specific government officials he believes have lied to Congress, misled Congress or leaked classified information.

“We believe there is a conspiracy to lie to the FISA [Foreign Intelligence Surveillance Act] court, mislead the FISA court, by numerous individuals that all need to be investigated and looked at,” said Nunes, the top Republican on the House Intelligence Committee.

“The second conspiracy one is involving manipulation of intelligence,” said Nunes, adding that “we’ve had a lot of concerns with the way intelligence was used.”

Nunes is also making what he calls a “global leak referral.”

“There are about a dozen highly sensitive, classified information leaks that were given to only a few reporters over the last two and a half plus years,” he said.

“We do believe that we’ve got pretty good information and a pretty good idea of who could be behind these leaks,” Nunes continued.

The Justice Department is not required to open investigations based on congressional referrals, but Nunes said he is willing to meet with Attorney General William Barr to discuss the matter.

Nunes has led investigations into the FBI’s handling of the Steele dossier, as well as efforts by Obama administration officials to unmask the identities of Trump associates in surveillance reports.

The FBI relied on the Democrat-funded dossier to obtain four surveillance warrants against Trump campaign adviser Carter Page. Nunes and other Republicans have asserted the FBI misled surveillance court judges by failing to disclose that the dossier was unverified and that it was opposition research funded by the Democratic National Committee and Clinton campaign.

It’s about time we make Obama and his corrupt administration pay for their crimes and the destruction that they caused to America.