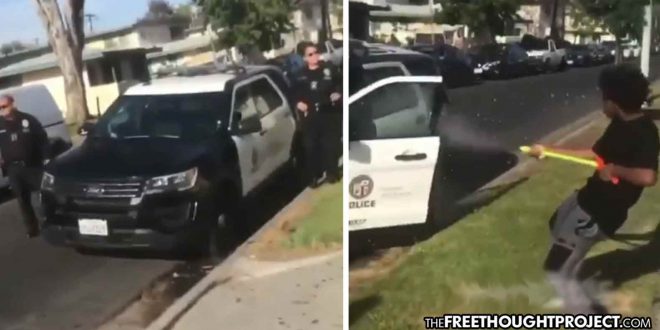 Los Angeles, CA — A video that will surely be a controversial conversation starter was shared with the Free Thought Project this week showing LAPD officers getting doused with water in a Los Angeles neighborhood.

“Six feet! Six feet!” a person is heard yelling when the cops exited the vehicle.

All of the sudden, as the male officer rounded the front of his cruiser, a young man runs up with a water gun and starts spraying. He was clearly not afraid of how the officer would react and seemed to be doing it as a joke.

The first person spraying would then set off a chain reaction of other people joining in and spraying the officers. Eventually, they were hit with so much water that they had to retreat.

As the two officers got in their vehicle, a torrent of water was unleashed on their cruiser with one person throwing a water gun as the pair drove off.

Below is that video.

With a population of nearly 4 million residents, Los Angeles is the largest city in California and the country’s second most populous city after New York City. It is clear from this video that a significant portion of the city is not practicing social distancing. Despite this obvious lack of social distancing, California is not even ranked in the top 30 states per 100,000 people for coronavirus deaths. Something to think about.

As TFTP has reported, this is not the first time citizens have been caught on video dousing cops with water. Last year, this became a trend. Multiple videos of people dumping water on cops took the internet by storm in 2019 with some police supporters calling for the offenders to be killed. Despite not doing anything at the time, in July, police began arresting the people seen in the videos for dumping water on the officers.

According to police, one of the men in a now-viral video seen dumping water on officers was 24-year-old Robert Perez. In July, Perez was arrested in connection with the drenching of two police officers by a crowd with buckets of water in the Bronx. The incident on East 173rd Street and Boston Road in the Bronx was captured on cellphone video, according to NBC New York.

Perez was charged with harassment, criminal mischief, disorderly conduct and criminal trespass. After his arrest, police released images of 10 more people wanted in connection with the water incident. The images led to the arrest of three more people, Courtney Thompson, Isiah Scott and Chad Bowden, all 28, and all face charges similar to Perez.

The video of the officers getting drenched by a crowd of people sent shock waves through the media. Because water can’t really hurt someone, the debate over what should happen to people who dump it on cops raged. Then, as TFTP reported at the time, we saw how the police felt about it when they began making arrests.

Exactly how the LAPD will respond to the people spraying water in this video remains a mystery. However, if they respond to water guns like they respond to innocent people sitting in a field, the residents of this neighborhood should be on the lookout.