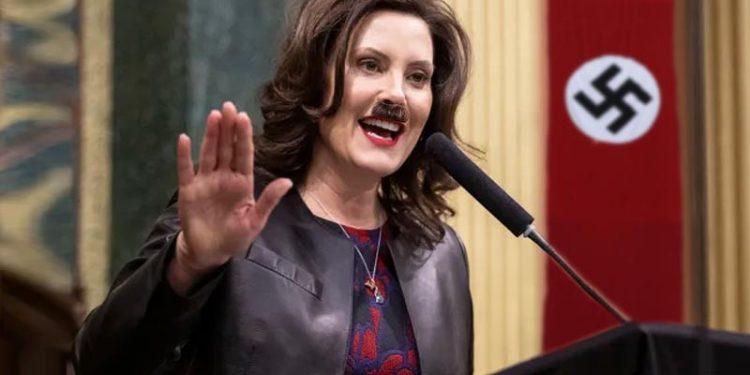 When it comes to the right to peacefully assemble in order to petition the government for redress of grievances, the States have recognized, guaranteed, and protected that God-given unalienable right just as the federal government.  That is, until recently.  Governors have ordered people to remain at home, in lock-down, despite the overwhelming evidence that coronavirus is an exosome and is being used as a political weapon for an agenda.  Many governors have gone so far as to threaten the people with arrest, fines, and imprisonment.  But, there is nothing in the Constitution for the united States of America that indicates rights given by God can be suspended by government in any type of emergency – declared or otherwise.  In other words, government has zero authority over that which is in the realm of God.

Enter in Michigan Governor Gretchen Whitmer, who seems to believe that she is above God.  In fact, Whitmer might as well declare herself “Ms. Hitler” because she told reporters that the Michigan State Police are monitoring the conversations of individuals who plan to attend the protest at the capitol today.

According to Breitbart News:

Michigan state police are “monitoring all of the conversations” of protesters planning to descend on the capitol Thursday, Gov. Gretchen Whitmer told reporters.

Whitmer was first asked about what “proof” she has that protesters had spread the virus around the state after previous demonstrations.

“I saw one report— I don’t have proof. I’m not following everybody home and taking their temperatures and watching them for two weeks,” she said.

Whitmer claimed to see a lot of activists “touching each other” at protests.

She said a group analyzed cell phone data and concluded that it “translates to where we’re seeing hot spots in rural parts of Michigan.”

“I don’t know the group, I’ve not vetted the data, I can’t vouch for it,” she admitted.

Whitmer was then asked if she “wants to see” the Michigan State Police ticket protesters who are violating social distancing orders.

“I think the Michigan State Police is monitoring all of the conversations around this event tomorrow – that they are prepared and are working with the attorney general,” she said.

She said they are prepared to ticket protesters “if there’s reason to do it.”

“I’m hopeful they don’t have reason to,” Whitmer said.

When it comes to God-given individual unalienable rights, no man, woman, or government entity has the authority to violate those rights.  One right everyone forgets is the right to privacy.  Don’t even claim there is no such right because it is enshrouded in the first Ten Amendments known as the Bill of Rights.  “The enumeration in the Constitution, of certain rights, shall not be construed to deny or disparage others retained by the people” – Ninth Amendment.  You have the right for your conversations to be private from the government and anyone else unless the government has probable cause sufficient for the issuance of a warrant to engage in search, seizure and investigation that would expose such conversations.

Whitmer claims to have seen “activists touching each other”.  When has touching another human being in a friendly, non-aggressive, non-threatening, non-harmful manner been considered a crime?  She also claims there are “hot spots” in portions of rural Michigan.  Hot spots of what – the phony coronavirus;  a virus so phony doctors are feloniously padding the numbers of dead upon instructions by the government entity, the Centers for Disease Control to enact a political agenda?

Did you hear in the video the misinformation Whitmer is spreading about this coronavirus hoax – “knowing it can be transmitted person to person”, “lingers in the air for quite some time”?  Both of those claims have been thoroughly debunked by numerous independent reputable doctors and scientists.  The information Whitmer is using comes from fraud Anthony S. Fauci, who has been thoroughly discredited since he claimed a 0.1% mortality rate for coronavirus, just like the flu, in a New England Journal of Medicine article co-authored by two other physicians but then turned around a presented a different set of data to the public.

Whitmer admits she doesn’t know the group that analyzed the data, has not vetted the data, and cannot vouch for the data.  For a governor who doesn’t know very much, she is willing to become Ms. Hitler, order her personal SS Gestapo, the Michigan State Police, to spy and surveil innocent citizens, and issue innocent citizens citations for violating one of her orders that has no authority because governors cannot make law.

What’s even more bizarre is the idiot Michigan State Police will do it.  And yes, anyone in law enforcement who will violate the rights of the people just on the say-so of someone else who holds no authority whatsoever to make law are idiots.  Oh, you in law enforcement need your jobs?  Well so do all the millions of Americans who have been deprived of their jobs by tyrannical governors based on a hoax.

We’ve heard the story time and again of all those who perpetrate atrocities against the people because someone in authority told them to do it.  What’s the excuse again – “I’ll get in trouble if I don’t do my job?”  Is your job following dictatorial orders or upholding the law?  And don’t even try to use the old “governor’s orders are law” dumb response.  Using that old garbage shows you don’t know the law and should not even be in law enforcement.

Let me “Hamner It Out” for you.

Check you on the flip side!