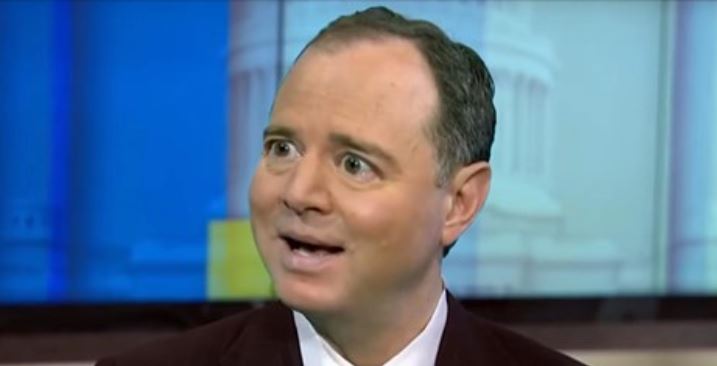 OPINION By Carmine Sabia at The Federalist Papers FLASHBACK!

President Donald Trump is fighting back against Rep. Adam Schiff in the way he likes to. By going on the offense against him.

President Trump tweeted on Sunday that he wants to see the head of the House Intelligence Committee investigated for treason.

“Like every American, I deserve to meet my accuser, especially when this accuser, the so-called ‘Whistleblower,’ represented a perfect conversation with a foreign leader in a totally inaccurate and fraudulent way. Then Schiff made up what I actually said by lying to Congress,” he said.

“His lies were made in perhaps the most blatant and sinister manner ever seen in the great Chamber. He wrote down and read terrible things, then said it was from the mouth of the President of the United States. I want Schiff questioned at the highest level for Fraud & Treason.

“In addition, I want to meet not only my accuser, who presented SECOND & THIRD HAND INFORMATION, but also the person who illegally gave this information, which was largely incorrect, to the “Whistleblower.” Was this person SPYING on the U.S. President? Big Consequences!” he said.

His lies were made in perhaps the most blatant and sinister manner ever seen in the great Chamber. He wrote down and read terrible things, then said it was from the mouth of the President of the United States. I want Schiff questioned at the highest level for Fraud & Treason…..

….In addition, I want to meet not only my accuser, who presented SECOND & THIRD HAND INFORMATION, but also the person who illegally gave this information, which was largely incorrect, to the “Whistleblower.” Was this person SPYING on the U.S. President? Big Consequences!

This came on the same day that Rep. Schiff demanded that President Trump allow Congress to read the transcripts of the calls between him and Russian President Vladimir Putin.

Congress is determined to get access to U.S. President Donald Trump’s calls with Russian President Vladimir Putin and other world leaders, the chairman of the House Intelligence Committee said on Sunday, citing concerns the Republican leader may have jeopardized national security.

“I think the paramount need here is to protect the national security of the United States and see whether in the conversations with other world leaders and in particular with Putin that the president was also undermining our security in a way that he thought would personally benefit his campaign,” Democrat Adam Schiff said on NBC’s “Meet the Press.”

Following a whistleblower complaint that Trump solicited a political favor from Ukraine’s president that could help him get re-elected, the lawmakers are investigating concerns Trump’s actions jeopardized national security and the integrity of U.S. elections.

The whistleblower’s complaint cited a telephone call in which Trump asked President Volodymyr Zelenskiy to launch an investigation of former Vice President Joe Biden and his son Hunter. Hunter Biden sat on the board of a Ukrainian gas company.

The July 25 phone call came shortly after the United States froze nearly $400 million in aid to Ukraine, prompting concern that Trump was using the taxpayer money already approved by Congress as leverage for his personal political gain.

Joe Biden is a leading candidate in the race to challenge Trump in the November 2020 presidential election. There is no evidence of wrongdoing in Biden’s actions involving Ukraine.

The matter prompted Democratic House of Representatives Speaker Nancy Pelosi to launch an impeachment inquiry against Trump on Tuesday.

Trump says there was nothing wrong with his phone call with the Ukrainian leader and denounced the whistleblower as a “political hack.”

White House adviser Stephen Miller took up the attack on Sunday, accusing the whistleblower of being part of a “deep state” government conspiracy to foment opposition to Trump.

“I have zero problems with this phone call,” Senator Lindsey Graham said on CBS’ “Face the Nation.”

The whistleblower’s complaint was deemed credible by the inspector general of the U.S. intelligence community and the acting director of national intelligence told lawmakers the person “acted in good faith” and “did the right thing.”

The complaint said White House lawyers directed that an electronic summary of the call, which was released to the public on Wednesday, be moved from the place where such things are usually kept to a secret server reserved for covert matters.

“If those conversations with Putin or with other world leaders are sequestered in that same electronic file that is meant for covert action, not meant for this, if there’s an effort to hide those and cover those up, yes we’re determined to find out,” Schiff said on NBC.

The intelligence committee has reached an agreement with the whistleblower to appear before the panel, Schiff told ABC’s “This Week.”

Lawmakers were working out logistics to protect the person’s identity and get security clearance for lawyers who will be representing the whistleblower. Schiff said he hoped the whistleblower can appear very soon.

House committees on Friday issued a subpoena to Secretary of State Mike Pompeo for documents concerning contact with the Ukrainian government.

They are trying to stop ME, because I am fighting for YOU! pic.twitter.com/xiw4jtjkNl