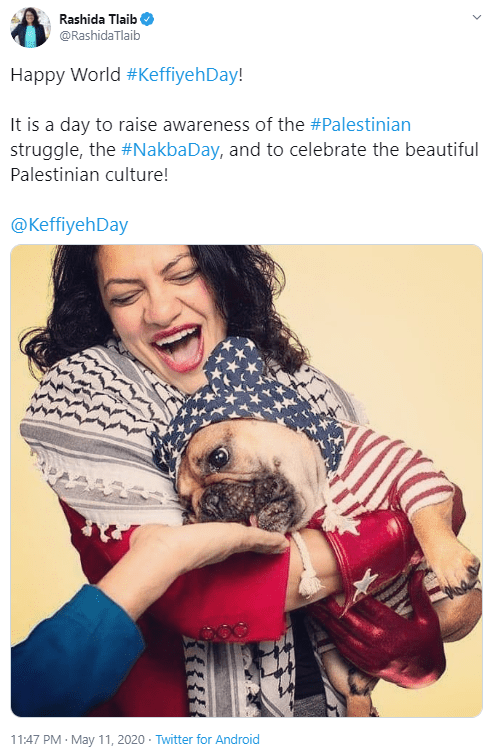 Disgusting.   Aspiring annihilationists adopt the wearing of the icon that Yasser Arafat made famous, the keffiyeh, because it is the symbol of Jew-hatred and Islamic jihad.

The keffiyeh was Yasser Arafat’s swastika and became a powerful symbol of jihad.

In the ensuing years, the keffiyeh became an icon of anti-Americanism, anti-semitism and anti-westernism.

The death-to-the-Jews marches across the globe during any Israeli defensive action were awash in keffiyehs from London to Paris, to New York, to Fort Lauderdale, to Bahrain, to Thailand …..well, you get the picture.

Rashida Tlaib Wraps Herself In ‘Palestinian’ Flag: Wraps Her Dog In An American Flag

Her officials are like wolves rending prey in her midst; they shed blood and destroy lives to win ill-gotten gain. Ezekiel 22:27 (The Israel Bible™)

In case you missed it, Monday was World Keffiyeh Day. Started by Solidarity for Palestinian Human Rights, a Montreal-based pro-Palestinian organization, to accompany Nakba Day.

Nakba Day, the day of catastrophe, was inaugurated by PLO head Yasser Arafat in 1998 to emphasize the idea among Palestinians that the Biblical prophesied return of the Jewish people to their ancestral home and the resultant declaration of a Jewish state by the entire world was, in fact, a catastrophe for the Palestinian people. The celebration of Nakba Day in Israel is a criminal offense as it entails a call for the destruction of the Jewish state.

Originally a traditional Arab head covering worn exclusively by men, its connection with terrorism has changed the garment while connecting it indelibly with violence and bloodshed. Originating in the Arabian Penninsula, the keffiyeh is now worn through the region. Traditionally worn by Palestinian farmers, the keffiyeh became worn by Palestinian men and became a symbol of Palestinian nationalism during the Arab riots of the 1929 when Arabs in British mandate Palestine murdered hundreds of their Jewish neighbors. Its prominence increased during the 1960s with the beginning of the Palestinian resistance movement and its adoption by Palestinian terrorist Yasser Arafat.

Arab social norms were challenged when Leila Khaled, a female member of the armed wing of the Popular Front for the Liberation of Palestine who participated in two airplane hikackings, wore the keffiyeh.

Social norms were stretched even further when it was adopted by pro-Palestinian Jewish students, referred to as “keffiyeh kinderlach. ” This term may have first appeared in print in an article by Bradley Burston in which he writes of “the suburban-exile kaffiyeh kinderlach of Berkeley, more Palestinian by far than the Palestinians” in their criticism of Israel. European activists have also worn the keffiyeh..

The scarf became so popular that Chinese manufacturers began producing cheap version. Ironically, the Palestinian national scarf is produced almost exclusively in China with only one factory for its production left in Hebron, Israel.

Also ironically, the politicized version of the garment frequently features an image of the golden Dome of the Rock, a shrine built on the site of the Jewish Temple. The scarf may also feature a Palestinian flag which is identical to the Jordan flag save for a tiny white star.