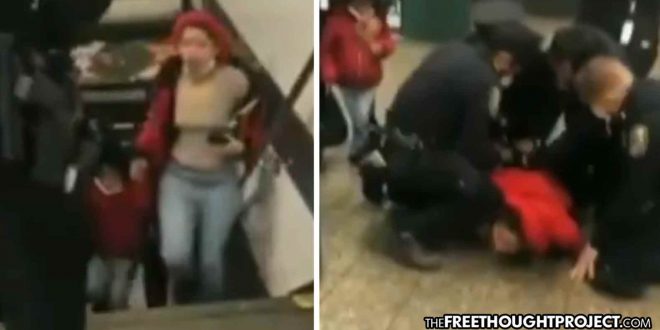 New York, NY — As cops across the country publicly state they are not going to enforce tyrannical orders from their governors that violate the rights of citizens, the NYPD seems to be doing the opposite. Video after video continue to pour out of the state showing how far cops are willing to go to enforce social distancing. On Wednesday night, a video was uploaded to Twitter showing NYPD cops attacking a mother in front of her young child over a confrontation for improperly wearing her face mask.

The assault and arrest of Kaleemah Rozier, 22, was recorded by a witness and unfolded about 11:50 a.m. inside the Atlantic Avenue-Barclays Center subway station when police told Kaleemah Rozier that she was wearing her face mask improperly, police said.

Police said Rozier, who was with a young child at the time, refused to correctly wear the covering and swore at them.

As the video shows, Rozier is merely trying to walk away from police, who devoted a small team of cops to her for not wearing her face mask properly.

As she attempts to walk out of the subway station, Rozier is seen in the video telling cops “don’t touch me! don’t touch me!” before pushing a cop’s hand out of her face. This was the straw that broke the police brutality camel’s back.

Seconds later, a half dozen cops the swarm the mother, pulling her young child out of the way before slamming her to the ground.

“C’mon, she got a kid with her,” a bystander could be heard saying on video, “she got a baby with her that’s too much, man”

Officers then force the woman to the ground and handcuff her.

“This individual was arrested only after her behavior toward officers warranted police action,” said NYPD spokesperson, Sergeant Jessica McRorie.

As Newsweek reports, the NYPD confirmed the stop was over the woman’s choice to wear the mask wrong.

In a statement sent to Newsweek, an NYPD spokesperson said the altercation took place at around 11:50 a.m. on Wednesday at the Atlantic Avenue/Barclay Center Subway Station after police officers stopped the mother for not “properly wearing” her face mask.

Face masks are required on public transit under New York’s rules requiring that residents wear the coverings in public if they cannot effectively socially distance from others.

“She responded to the officers with vulgar language and repeatedly refused requests to properly wear her face covering over her nose and mouth,” the spokesperson said. “Officers then informed her she would be ejected from the station and began to escort her from the location.”

The spokesperson claimed that when Rozier pushed the officer’s hand away from her face, that this is considered “striking” an officer.

“The woman then waved her arms and struck an officer with her hand,” the spokesperson said. “As a result of these actions, she was taken into custody and placed under arrest.”

When you watch the video below, you will see what a ridiculous claim this is. Nevertheless, Rozier was charged with resisting arrest, disorderly conduct and harassment, the spokesperson said. She has since been “released on a Desk Appearance Ticket.”

The NYPD is standing by the decision to arrest the mother in front of her son, claiming Rozier’s “behavior towards officers warranted police action” and they are “confident that the police officers in this incident acted appropriately and with respect.”

We disagree and so do a lot of other people, including New York City Mayor Bill de Blasio who condemned the incident, saying: “Face coverings are important to protect everybody—they’re not optional. But no one wants to see an interaction turn into this.”

“We’ve made progress with de-escalation,” he said, referring to NYC’s efforts to ensure that officers are focused on de-escalating conflicts. “This isn’t it,” he said.

Face coverings are important to protect everybody — they’re not optional.

But no one wants to see an interaction turn into this.

We’ve made progress with de-escalation. This isn’t it. https://t.co/jVx22uLSj8

Perhaps Rozier was confused by the government’s mandatory mask order which is arguably a very easy mistake considering the CDC has changed their stance on the matter multiple times.

“There’s no reason to be walking around with a mask,” infectious disease expert Dr. Anthony Fauci told 60 Minutes back in March.

“It’s voluntary, you don’t have to do it,” the president said of wearing a mask in April. “This is voluntary. I don’t think I’m going to be doing it.”

Masks in the News