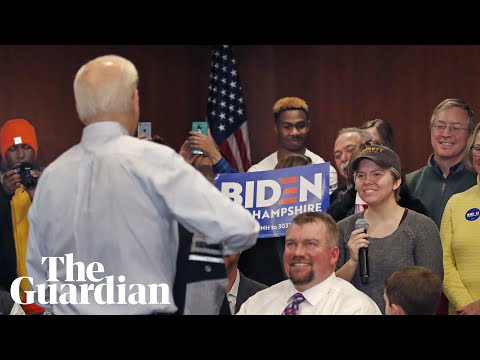 Presumptive 2020 Democratic presidential candidate Joe Biden continues to struggle through media appearances where he consistently has trouble communicating basic stances and policies, or even articulating coherent sentences for that matter, teleprompter or not.

Of course, as we’ve highlighted multiple times things get drastically worse any time he has to field questions not specifically scripted, making it deeply awkward for the mainstream media interviewers who seem desperate to prop him up as the only “serious” candidate, not to mention raising serious questions of the sharpness of the 77-year old’s mental faculties.

On Thursday afternoon Biden held a “virtual roundtable” despite what seems a past half-year of his team finding any excuse possible to keep him away from interacting with the public, given the number of times things go horribly wrong into hilarity and embarrassment.

From nearly the beginning of the event, Biden made bizarre and confused tongue-tied claims, saying:

Currently there are a little over 300,000 deaths from COVID-19 globally, and over 85,000 in the United States. It’s hard to know exactly what Biden was trying to say, considering too he references “unemployment insurance… uh, numbers”.

The Daily Mail describes of his switch-up on the numbers, something he didn’t seem aware he was doing:

And the self-proclaimed ‘gaffe machine’ did little to mitigate those apprehensions during a monologue about soaring unemployment levels on Thursday, in which he wrongly claimed 85,000 jobs have been lost in the US as a result of COVID-19, and millions of Americans have died.

The former Vice President appears to have got his numbers confused. In reality, at least 85,000 Americans have died, while  36.5 million have lost their jobs.

Democrats might prefer that their presidential hopeful front-runner be hidden away somewhere until the general election, given that the more he talks the more it’s impossible to ignore what’s clearly not just the usual gaffes and Bidenisms, but which actually raise questions of cognitive capacities and potential senility.

“Biden claims '85,000 jobs have been lost in the US and millions of Americans have died'”

Should we be concerned? If it was just a one (or two, or three) off, no one would care. But Biden’s “gaffes” are becoming harder to ignore.#BidensMarbles https://t.co/kajj3j4GzH

Likely the Dem party bosses simply hope they can put a warm body in the White House after next November while they write the script, but this too could be overreaching given Biden at this point seems to struggle even when reading off a teleprompter.