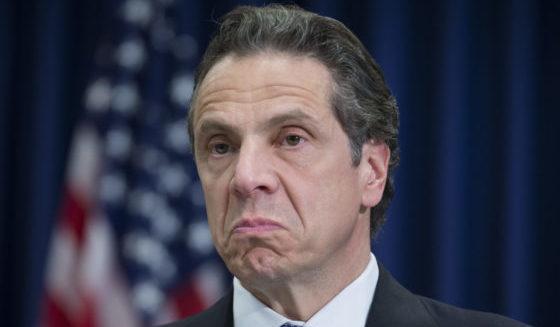 The people should just vote “No” against New York Governor Andrew Cuomo after he begs the federal government, ie. US citizens to bail his state out of a $61 billion debt he created with his lawless tyrannical response to the ongoing coronavirus hoax response.

As Democrats in Congress double-down on their demands for another $3 trillion in stimulus spending having passed their spending agenda in the Democrat-controlled House, Gov Andrew Cuomo warns that his state has accrued more than $61 billion in debt pertaining to its coronavirus response. Federal aid is the only feasible alternative for the state to manage such an incredible burden without essentially being forced in between a rock and a hard place, with the only alternative being a combination of draconian spending cuts and confiscatory tax hikes.

The problem for blue states like New York is that they fund their generous state budgets primarily with income tax and sales tax revenues, both of which have dried up during the crisis. At the same time, since Trump delegated most of the responsibility for on-the-ground virus response to the states (in cooperation with federal agencies like FEMA), spending has soared.

We have a significant economic problem in the state,” Cuomo said. “It’s the collective of all the other economic problems. And when you add up all the problems its a $61 billion hit to the state budget.”

“We don’t do state exploration in this state, we fund schools, we fund hospitals and we fund local governments. Local governments fund police, fire – all the heroes that we talk about. Hospitals – that’s nurses that’s doctors that’s emergency room staff,” Cuomo continued, as he pitched the Democratic spending bill to his audience.

Did the Trump administration really forget “the little guy?”. The fact that many ‘non-essential’ hourly workers in New York State are earning more sitting at home than they did at work should be enough to disabuse readers of that notion.

And we don’t hear Fla. Gov. Ron DeSantis, who leads a state with no income tax, complaining about how the rest of the country needs to pitch in.

Well, exactly right, but the tyrannical way in which governors sought to shutdown their states was their decision and now they not only have cost some people their businesses and livelihoods, but they want those same people to bail them out both politically and financially.

Congress should just say “No,” and let Cuomo figure out how to start making the New York budget a whole lot leaner.