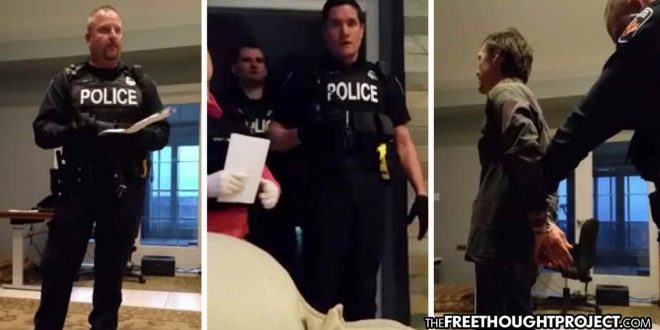 Hamilton police used “safety” as the reason they participated in the medical kidnapping of an immigrant couple who were outspoken in their views against the government.

In a nearly 18 minute long YouTube video the family recorded, Hamilton police can be seen and heard justifying their orders to come to the home of Olga Kilimova and Viatcheslav Kilimova and take the couple to St. Joseph’s hospital for a psychiatric evaluation. This is known as a medical kidnapping.

To be clear, the Kilimova family is one which is also very outspoken in their beliefs. Among other things, the family believes 9/11 was a hoax, the earth is flat, and all governments are corrupt. As a result, three years ago they stopped paying taxes and notified Hamilton they would not be funding their “corrupt” system of government. Never once, however, have they made a threat to anyone.

In all fairness, the Kilimova family should be entitled to think and act the way they wish, which is called freedom, but certainly deciding to stop paying taxes was most likely the reason why they found themselves in trouble with the law. But the real question remains. Should people be taken against their will , away from their home and loved ones, and placed in a psychiatric facility because they do not think like the rest of humanity? In police accountability circles this is called “medical kidnapping” and should be banned.

Things escalated from the point they decided to stop paying taxes and sent their manifesto to the Canadian government. Their declaration, as well as all the other somewhat crazy things the family believes can be read at www.earthlyfireflies.org. While some of their beliefs are rather benign, others, such as Costco being an organization used by governments for nefarious purposes is way out of left field, just like their flat earth beliefs. Still, does it warrant medical kidnapping. You be the judge.

Mr. Kilimova appeared calm in the video, questioning the officers allegiances and claims he is just doing his job when he came to their home to take them away.

After speaking to my partner yesterday there are some concerns for your safety.

The officers then proceeded to introduce a hospital employee who was going to escort them to the medical facility. Mr. Kilimova protested to the presence of men with guns in his home. He indicated SWAT teams had been there the day before. Mrs. Kilimova asked:

Why did you come at 8 o’clock? It’s time for us to sleep.

The lead officer responded they were there to take them under the guise of “safety” to the hospital. Mrs. Kilimova told him:

You sold your soul. By doing this pledge of allegiance you annihilate your conscious. So, whether it’s moral or not you pledged to do what the government or somebody else would tell you to do. So you sold your soul.

When you job description involves medically kidnapping someone for having non-threatening thoughts the state deems unsavory, and you unquestioningly carry out these orders, one can make the argument that you have annihilated your conscious.

The lead officer responded that a judge had signed a “form 2” to take the couple to the hospital for a medical evaluation. “It’s a form by the Ministry of Health that is backed by a provincial judge,” to take them to a psych facility. He then said he was “paid” to enforce this and he swore an “oath” to “protect you guys and make sure that you’re safe” he stated. Mrs. Kilimova replied:

The Kilimova family is a Christian family who reveres the teaching of Russian author Leo Tolstoy. While their beliefs may be extreme and may be nontraditional, the question of their sanity seems clear from the video. They think differently than most of society and their thinking likely got them into trouble with the so-called authorities. Mr. Kilimova declared:

You are not authority to us…God is our authority.

Their family pet, a German shepherd came into the room and the guys in uniform immediately became fearful, asking if the dog would do anything to them. In that instant, the semblances of humanity returned to the room with all the adults silenced with the apparent beauty of the animal. The healthcare worker convinced the family to put the dog into another room for the safety of everyone involved.

”You’re not being charged with any crime, sir,” an officer stated.

“So this is going to happen folks,” the officer promised.

“You are sick people,” Mr. Kilimova said as they put the handcuffs on him.

The Kilimova family was taken against their will and placed into a psychiatric facility. They posted later Mr. Kilimova had been released but his wife was still in custody. The pair have promised to starve themselves to death in protest of having their liberty taken from them:

They did not like our incriminating articles on our blog: earthlyfireflies.org. They kept us hostages without communication even with each other. They released one of us after he declared going for dry fast after 5 days, and kept the other one indefinitely, just transferred her to a health department with a guard, she is going die there. Even our own bodies do not belong to us, all government controlled. We are fasting to death. This is a manifestation that human spirit – God’s spirit in us – is stronger then government control.

The truth is folks, the minute you start exercising your free speech, even if it’s something crazy like the earth being flat, the very instant you inform the government you won’t pay any taxes, you become a target.