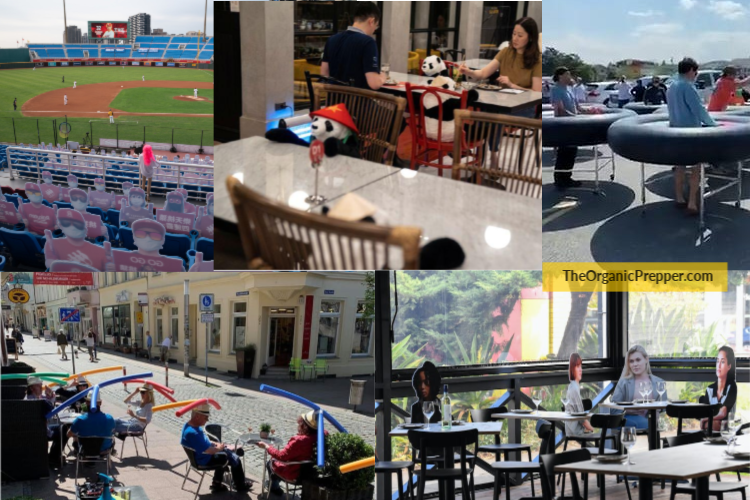 2020 has been a disturbing year all the way around, what with a pandemic, fear of contagions, mandatory lockdowns, and economic devastation. We’ve had everything from a deadly virus to aliens to murder hornets. And just when you thought this year, couldn’t get any stranger, hang on to your halo.

Wait until you see some of the flabbergasting ways businesses are enforcing social distancing measures.

Places that used to be bustling with human customers and spectators are now being populated with…mannequins, cardboard cut-outs, and sex dolls. It sounds like I’m making this up. I’m not.

For example, Patrick O’Connell, the chef and proprietor of The Inn at Little Washington in Washington, Virginia, has teamed up with a local theater to dress mannequins in WW2 area finery to fill booths and make sure customers “maintain social distancing.”

…while adding an element of fun, the mannequins really hope to provide some of what has been lacking as many Americans seek connection in an isolating pandemic.

“We’re all craving to gather and see other people right now,” O’Connell said. “They don’t all necessarily need to be real people.” (source)

I hate to be mean because I know the intentions are good. But sitting amongst a room full of mannequins sounds more like that episode of Bates Motel when Norman had dinner with the taxidermied corpse of his mother than like a comforting return to normalcy to me.

This isn’t a one-off, either.

Next on “Dining with Dummies,” Australian restaurant-goers can sit in a cafe with cardboard people, lulled by the buzz of taped conversations on the speakers.

At Five Dock Dining, cardboard cutouts will keep you company while you dine.

In Sydney, Australia, the restaurant is adapting to a post-coronavirus normal by adding cardboard cutouts to dining tables. The restaurant also plans to play guest “chatter” on the speakers…

…The limit on guests presented a challenge to Frank Angeletta, the owner of the restaurant. Five Dock Dining has a large dining space, and he was worried the area would feel empty. (source)

I applaud the effort and the creativity, I really do. But is it just me or are these efforts to put fake humans in restaurants kind of creepy?  I would much rather sit in a nearly empty restaurant than be surrounded by fake humans. If you’ll pardon the pop culture reference, anyone who has ever watched the show Supernatural knows what’s likely to happen next.

Then there are the sporting events.

A professional soccer league in South Korea made the befuddling choice to stud the bleachers with blow-up dolls holding up signs to cheer their teams along.

The club FC Seoul apologized on Monday after what it believed were ordinary mannequins — quickly recognized by many fans as sex dolls — were placed in the stands for a match against Gwangju FC.

Some on social media noted the telltale signs, like the business logos for sex toy marketers on the dolls’ clothing, or their strikingly buxom physiques. Of the roughly two dozen dolls in the stands, nearly all were women.

“We had tried to add some fun in the no-spectator match,” FC Seoul said in a statement. “But we have not checked all the details, and that is clearly our fault.” (source)

In Taiwan, a baseball game was played before a full stadium. The thing is, the stadium was full of cardboard cutouts and plastic mannequins holding signs. Oh, and a band of robot drummers.

On a balmy Saturday evening inside one of Taiwan’s largest baseball stadiums, the floodlights flickered to life and the players took their positions.

But as the first batter stepped up to the plate and the pitcher took a deep breath, the only fans inside the 20,000-seat stadium in the northern city of Taoyuan were cardboard cutouts and plastic mannequins.

Some wore hot-pink wigs and surgical masks. Others held signs with this cheery message: “We will always be with you!” A five-member band of robots played drums from the stands — a substitute for the usual cacophony of live music. (source)

I’m just going to present this without further commentary.

Then there are these ways to keep humans apart.

Bizarre social distancing methods don’t stop with the use of fake humans. Read on for the undignified methods other restaurants are keeping humans apart.

“It’s like a bumper boat, but it’s actually a table,” owner Shawn Harmon said of the design, which was developed by Revolution Event Design and Production in Baltimore.

A customer will stand in the center of the circular table surrounded by a rubber barrier that keeps them safely separated from other patrons in accordance with social distancing guidelines. The tables sit on wheels that allow them to stay mobile. (source)

Oh good. You can walk around with your big, awkward bumper boat table. And who doesn’t want to stand the entire time they eat dinner or have a beer?

Heaven help you if there was some kind of attack or emergency and you needed to move quickly. I have a horrible mental image of a bunch of people in innertubes all trying to squeeze out of the exit at once.

If standing in a giant innertube for dinner isn’t your idea of fun, don’t despair. There are numerous other bizarre methods to have a socially distant dinner.

A restaurant in Schwerin, Germany is handing out pool noodle hats for their customers to don.  That sentence just confused my editing software so much it had no suggestions for improving the clarity.

Café Rothe in the city of Schwerin along with German TV channel RTL, celebrated its reopening by handing out social distance-enforcing pool noodle hats to patrons as a gimmick.

But what if you don’t want to sit with fake humans, stand in an innertube, or wear a funny hat? Does that mean you can no longer go out to dinner?

A restaurant in Thailand has a cuddly approach to social distancing. Maison Saigon is using stuffed toys to keep diners company while they eat.

“Earlier we had only one chair for the tables where the customer came alone. But for me, it felt strange, so I thought I’d give them some company,” said Natthwut Rodchanapanthkul, the owner of Maison Saigon, a Vietnamese restaurant in Bangkok.

Sitting opposite one of the panda dolls, diner Sawit Chaiphuek said he was happy to have some company as he stepped out to eat for the first time in months.

“The doll makes me feel less lonely eating by myself,” said Sawit, 25. (source)

Although this seems like a good way to keep the kiddos happy, apparently, some adults also feel better when they have something…anything…at the table with them in a restaurant. And here I’ve just been taking a book with me for times like this.

Is this the “new normal?”

I know that I wrote before that we’d never get “back to normal” but this really isn’t what I meant. Never in the past ten years of creating content have I written an article with so many potential times to use the word “flabbergasted.” We are witnessing the death of human dignity. The end of an Empire. The collective loss of all rational coping mechanisms.

It just can’t be mentally healthy to be surrounded by fake people all the time. My mind is boggled that there are hebetudinous people who prefer sitting with stuffed animals or mannequins to just sitting at a table in a partially empty restaurant. Will we be doing this for six months? A year? Forever?

It was one thing when Tom Hanks’ character on Castaway had a deep friendship with a volleyball named Wilson. He was legitimately isolated. But we are not. We don’t have to have inanimate “friends.” What does this say about people? About our future as a society?

It’s an absolute dumpster fire. People are so worried about being “safe” that they’re embracing the bizarre and extreme, instead of pushing forward and getting on with their lives. While I do take the virus seriously, I’m not fearful. Just imagine the level of fear that an adult must be feeling when dining in public with a stuffed toy makes them feel better.

It’s difficult to fathom such a breathtakingly aberrant world, filled with imaginary friends and actual, physical, personal space bubbles. Imagine if this continues, the damage done to children who grow up knowing nothing else. How will they develop empathy and healthy human relationships? This is an environment that fosters fear and mistrust of others, just like the horrifying back-to-school scenario that had kids marching in 5-feet-apart formation for “recess.”

It’s like some kind of bizarre, humiliating social experiment to see how far people are willing to be pushed when they’re afraid.

This takes the “divide” part of “divide and conquer” to an unimaginable new level.

Daisy Luther writes about current events, preparedness, frugality, voluntaryism, and the pursuit of liberty on her website, The Organic Prepper. She is widely republished across alternative media and she curates all the most important news links on her aggregate site, PreppersDailyNews.com. Daisy is the best-selling author of 4 books and runs a small digital publishing company. You can find her on Facebook, Pinterest, and Twitter.