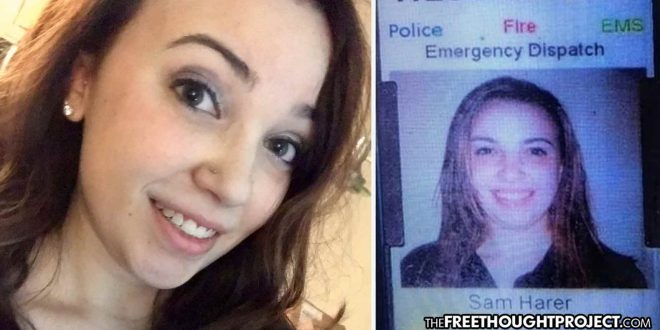 Channahon, IL — As TFTP reports on a regular basis, police officers reportedly abuse their significant other at four times the rate of non-police officer families. The studies into police domestic violence also suggest that this number is likely higher given the fact that the victims are often too scared to report it, or even if they do, the abuser’s co-workers cover it up. In one of the most glaring incidents of alleged domestic violence and subsequent cover up TFTP has ever seen, a cop in Illinois appears to be getting away with killing his girlfriend.

The parents of Samantha Harer, a deceased 911 emergency dispatcher, have filed a lawsuit against the city of Channahon, Channahon’s Police Chief Shane Casey, Deputy Chief Adam Bogart and Detective Andrew McClellan for police misconduct and deprivation of civil rights in regards to their daughter’s death.

Lawyers for the officers and the city have been fiercely opposing the suit but Kevin and Heather Harer have been fighting them every step of the way.

If we look at the facts of the case, there should be no lawsuit and all those involved should be in prison. Unfortunately, however, because the alleged murderer and his co-conspirators are officers of the law, they’ve reportedly waged an elaborate web of lies to cover up the murder of Samantha Harer — despite overwhelming forensic evidence to the contrary which paints Crest Hill Police Officer Felipe “Phil” Flores as her killer.

On Feb. 13, 2018, Harer was found nude in her bedroom with a single gunshot through her head. Off-duty Crest Hill Police Officer Felipe “Phil” Flores, Harer’s estranged boyfriend, called 911 claiming Harer had locked herself in her bedroom during an argument and shot herself.

To reiterate, when the forensic experts examined the crime scene, they found that there was no way Harer could’ve killed herself as she had no gunshot residue on her hands — meaning she never fired the gun. Instead, it was officer Flores who fired the gun, according to the evidence, and, who also had Harer’s blood on his shirt.

This should have been an open and shut case. Flores should’ve been immediately arrested and tried for the murder of Samantha but this is the exact opposite of what happened.

Months after Harer was found with a bullet hole in her head and after police knew of all the evidence showing Flores was the killer, on Dec. 28, 2018, Channahon’s deputy police chief issued a news release indicating that Harer had died from a self-inflicted gunshot wound to her head and her death was being ruled a suicide.

Brooklyn, N.Y. attorney Jennifer Bonjean, who is representing Harer’s parents in the case has repeatedly called the “investigation” by Flores’ fellow cops a “sham.” It appears, however, that it is far more than that.

Bonjean argues Bogart, Casey and McClellan are responsible for covering up a homicide because they did not want to tarnish the reputation of another local police department.

In addition to Channahon, the Harers’ lawsuit names the Crest Hill Police Department and Flores as co-defendants.

Bonjean said that Channahon police once told Harer’s parents that gunshot residue was found on their daughter’s hands, while Flores’ tests were negative even though the opposite was true.

Channahon “also hid from them very incriminating evidence before the case dismissed,” Bonjean said. “They didn’t tell them of third party witnesses who heard that there was a struggle.”

Multiple witnesses in the apartment complex at the time of the shooting all reported they heard a struggle before the gunshot went off.

After Harer’s death, Flores was put on paid administrative leave and collected a check without working for more than a year. In March of last year, he abruptly resigned — you guessed it — during the middle of the investigation surrounding Harer’s death.

Patch reports that this isn’t Flores’ first run-in with the law either. He was accused of raping a woman in 2016 but it appears his blue privilege protected him there as well.

In 2016, Flores was investigated by the Illinois State Police in connection with allegations he raped a sleeping woman at her house in Crest Hill. Flores and the woman had been friends, but were not romantically involved. Flores drew a 30-day unpaid work suspension as a result of the rape allegations, but the Will County State’s Attorney’s Office declined to file criminal charges.

“They covered up misconduct of a fellow officer because police departments circle the wagons when it comes to police officer misconduct,” Bonjean told Patch last week. “That’s essentially the blue code of silence. My clients are entitled to relief because Channahon has just obstructed their effort to learn the truth about Samantha’s death.”