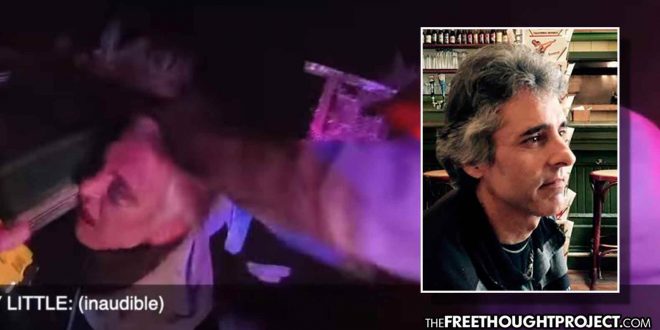 Sonoma County, CA — Last year, David Glen Ward was the victim of a carjacking. Like he was told to do, he reported this attack and theft to police. Sadly, however, after he would get his green Honda Civic back, police would mistake him for the thief, pull him over and kill him. Shocking video of the incident was later released. Now, the mother of the victim is suing the Sonoma Country Sheriff’s office and others for the role in her son’s death.

The good news is that also this week, the results of an independent investigation were handed over to the DA to see if the cops responsible for Ward’s death should face criminal charges. As KTVU reports:

And in a separate but parallel investigation, the Santa Rosa police department, which headed up a standard inquiry into the officer-involved shooting, forwarded their findings to the District Attorney on Tuesday afternoon, according to Lt. Dan Marincik.

It’s now up to the DA to decide whether any criminal charges will be filed against the officers.

According to officials, on Nov. 24, 2019, Ward reported he’d been the victim of a carjacking. During the theft, Ward was pistol whipped by his attacker, leaving him with injuries to the face. Three days after his car was stolen, Ward would recover it. Sadly, however, he would make a fatal mistake and forget to officially tell police he got his car back.

On Nov. 27, police spotted Ward’s car and initiated a traffic stop. For an unknown reason — perhaps because he was just carjacked three days earlier — Ward chose not to stop and led police on a brief chase.

Approximately five minutes later, police would ram their cars into Ward’s causing him to spin out, bringing the chase to an end. As the body camera footage shows, officers approached the car with their guns drawn.

“Show me your f— hands! Show me your hands!” Deputy Jason Little shouted, pointing a gun at Ward. “Turn off the f— car!”

Ward appeared unable to open the door and instead rolled down his window to tell the cops that he was the victim, not the thief.

“I can’t believe this, I’m the injured party in this,” Ward said. He later asked, “Why you f— harassing me all the time?”

Instead of opening Ward’s door and pulling him out, Deputy Charles Blount proceeded to drag the man through the window.

“Give me your hands,” Blount yelled as he began to drag the carjacking victim through the car window.

Blount then claimed Ward bit him and began punching him in the back of the head. The SF Chronicle reports what happened next:

About six seconds after Ward was shocked, Blount placed him in a choke hold for more than 30 seconds. At that point, other officers opened the passenger door and dragged Ward out, putting him on the ground face-down and handcuffing him. Little and Blount both said Ward had bitten them during the encounter.

After they beat, tasered, and choked the carjacking victim for nearly a minute, Ward’s body had succumbed to the abuse and he became unresponsive. As he lay on the ground, completely unconscious, only then did the cops realize Ward was the owner of the vehicle and the victim, not the perpetrator of the carjacking.

“This is, this is the owner of the car,” the officer said. “This is David Ward. He’s the, he’s the victim.”

Moments later, Ward would stop breathing altogether and would be pronounced dead later at the hospital. The Marin County coroner’s office found that Ward died as a result of a physical confrontation with law enforcement, cardiorespiratory collapse, neck restraint, blunt impact injuries and the use of a Taser.

In December, after the video had been released, Sonoma County sheriff Mark Essick said Blount had been on administrative leave since the incident and that he was issued a letter of termination.

However, Blount was never fired and instead quietly resigned in February, two months after Essick claimed Blount’s actions shocked the conscience.

“I think it is fair to say for anybody who watches the video that it shocks the conscience,” Essick said at the time. “When this kind of conduct emerges, it is my job as a leader to call it out.”

The fact that he was allowed to retire before being fired should come as no surprise, especially considering his past record of excessive force. According to KTVI:

Blount had a “known and well-documented history of excessive force, particularly surrounding the use of chokeholds.” It was a common belief, the suit alleges, that Blount was “going to kill someone one of these days.”

The lawsuit claims Blount choked a disabled woman in January 2015, slamming her body into the ground after he had caught her jaywalking. Then he allegedly perjured himself, the suit claims, by denying what he had done, despite the fact that there was cell phone video of the interaction.

However, department leadership knew about Blount’s history and “failed to discipline or restrain Mr. Blount for prior incidents of unjustifiable violence,” the suit claims.

Naturally, the police union-appointed lawyer, whose job consists of keeping killer cops on the force, disagrees and blames the carjacking victim for his own death.

Blount’s attorney, Harry Stern, said he was “extremely disappointed” in the sheriff’s decision, which he said was driven by “panic, political expediency and hindsight.”

“Charlie Blount has served the people of Sonoma County for over 20 years and honorably served in the military for 20 years before that,” he said. “His actions during this arrest were entirely reasonable.”

Stern said Ward “caused his own death by inexplicably taking a number of bizarre actions that confirmed in the deputies’ minds that he was an armed carjacker, rather than the victim of that crime.”