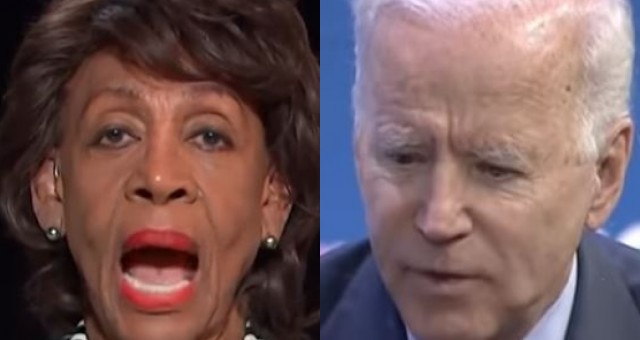 Can Creepy, Sleepy Joe Biden go toe to toe with President Donald J. Trump in the debates? Personally I think Biden will get roasted.

Can Biden actually defeat President Trump in a general election contest? Again, I think not and apparently the one and only Maxine Waters has her doubts as well.

When Waters was asked by Just the News senior correspondent Nicholas Ballasy if Biden could beat Trump she said- “I don’t know, but we’ll see.” Waters replied.

‘Rep. Maxine Waters (D-Calif.), chairwoman of the House Financial Services Committee, said Tuesday she doesn’t know if Joe Biden has what it takes to defeat President Trump and declined to share her opinion of the former vice president’s fitness for office.’

Waters noted that while she has not publically announced her support for Biden or his Democrat presidential primary rival, Sen. Bernie Sanders (I-VT), it’s paramount that the nominee is able to unseat the president. “It’s not about who you like,” the California Democrat explained. “It’s about now watching and understanding who can beat Trump,” Joshua Caplan at Breitbart reports.

I have news for you lady- none of you losers stand a chance beating Trump- NONE OF YOU!

Democratic insiders know Biden has cognitive decline issues. They joke about it. They don’t care.

Here’s @ddayen, always been constrained and respectful with his rhetoric, saying what is obvious to any minimally honest person.

The steadfast insistence on the part of Dems to just pretend this isn’t true and hope it somehow goes away is a staggering exercise in self-delusion: https://t.co/dTToQk7uIc

Waters was then asked about Biden’s frequent gaffes on the campaign trail and whether his mental acuity is a cause of concern.

“Nobody has made more gaffes and told more lies than the president of the United States of America,” she quipped about President Trump. “How dare he talk about somebody’s gaffes?

“Sleepy Joe doesn’t know where he is, or what he’s doing,” the president wrote on Twitter March 3rd. “Honestly, I don’t think he even knows what office he’s running for!” Biden has indeed mistaken the state he has campaigned in on multiple occasions.

President Trump’s jab came one day after his rally in Charlotte, North Carolina, in which he mocked Biden for erroneously urging supporters to vote for him on “Super Thursday.”

The rhetorical stumble was one of several in recent weeks. During a campaign stop in South Carolina, the former vice president declared himself a candidate for the “United States Senate.” At the start of his Super Tuesday speech in Los Angeles, Biden mixed up his wife, Dr. Jill Biden, with his sister, Valerie.

In an apparent effort to prevent further gaffes, Biden’s speeches have been cut down to as little as seven minutes.

LOL! What a mess.